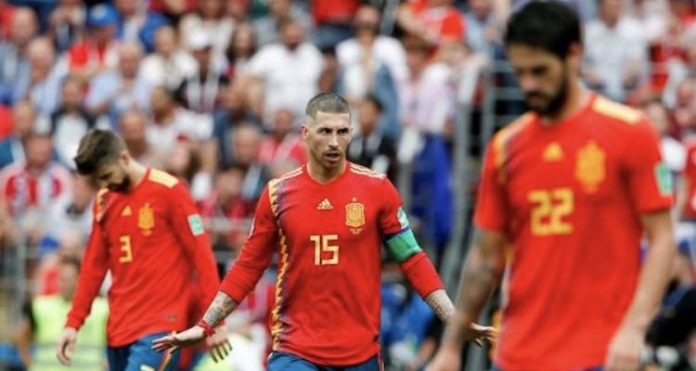 It was penalty shoot-out mayhem over the weekend as both games went 120 minutes before being decided by spot-kicks.

Russia went through on penalties in the first game after Spain attempted to bore them into submission for the previous 120 minutes. They have been wonderful to watch at times but I wasn’t sad to see them go out. There’s clearly something missing from the truly great Spanish sides we’ve seen, and while they can pass it around all day, the lack of incisiveness and end product meant they left themselves vulnerable.

They had gone ahead through an own goal but Gerard Pique was deemed to have handled the ball to give Russia a penalty. Like many decisions in this World Cup, it divided opinion. Personally, I think it was a good call from the referee. He brought his hand down, then put it back up again knowing there was a good chance it might stop the ball if his opponent won the header. To me it looked deliberate, disguised by experience and cunning as accidental.

Ultimately, it proved costly as Spain couldn’t score again despite making seventy trillion passes in the opposition half. It all felt a bit familiar, struggling to break down a side sitting deep and defending with all their might, but you don’t get any awards for having more of the ball than the other team. So, they go home, and they now have to rebuild after what has been a brilliant era for the Spanish national team. The exceptional players that made them so good are now gone or very much on the wane, and they look pretty ordinary again.

In the other game Croatia missed a penalty in injury time, Luca Modric the guilty party after Rebic had been cynically fouled just before he was about to score. I know there’s a new rule about red cards but this was surely a blatant sending off offence. The yellow card is only when the player has committed an accidental foul, and the one yesterday was – in my opinion at least – a defender knowing he might as well make the foul and take the risk.

It paid off because he was booked and Modric missed, but in the end Croatia went through after a low quality penalty shoot-out. The keeper gets some credit for making the saves, but I think the takers made it easier for him than it should have been. Too many at the right height, too many with not enough pace and not placed correctly.

If you hit it hard enough and far enough into one of the corners, a goalkeeper has got no chance. Gambling on the keeper diving one way or the other makes some sense, but I always feel like a penalty hit down the middle is a bad penalty. Of course if it goes in you can’t really argue, but I believe your chances of scoring are far higher if you combine power and precision.

The Robin van Persie and Patrick Vieira penalties in this shoot-out are perfect examples of that. The keeper went the right way for both, but still couldn’t get anywhere near them.

Perhaps it’s hard to find five players (or more) who have the ability and technique to produce a penalty like that – especially in a pressure situation – but if you want un-saveable, that’s as close as you’re going to get. Anyway, Croatia did enough to go through to the quarter-finals where they’ll face Russia.

Today, Brazil take on Mexico which should be tremendous fun. Get involved in the Neymar drinking game. Every time he dives. Drink. For each roll he produces after a dive, do a shot. Chug a beer each time he scowls at the referee and calls him names. You’ll be half-cut by about 20 minutes in. I guess Brazil will be favourites, but this World Cup has thrown up some surprises, and the fact that I might tip them to go through is all the reason you need to stick some money on Mexico.

Then it’s Belgium v Japan and if the latter go through I will eat my hat. My delicious, made entirely from sausages and pastry hat. Come on Japan! In seriousness though, it’d be a huge shock if Belgium didn’t progress without too much fuss.

World Cup aside, we ought to get some Arsenal news this week too. Sokratis Papastathopoulos is reportedly in London to finalise his transfer from Borussia Dortmund, and he’ll become the third signing of the summer after Stephan Lichtsteiner and Bernd Leno. I suspect now that we’re in July, we might see a bit more action on the transfer front, both in and out. We should see some loan moves for young players go through as well, and we’ll have details of all those deals over on Arseblog News as and when they happen.

James and I will have an Arsecast Extra for you later on. As ever, if you have any questions send them to us both please – @gunnerblog and @arseblog – with the hashtag #arsecastextra.

Until then, have a good one