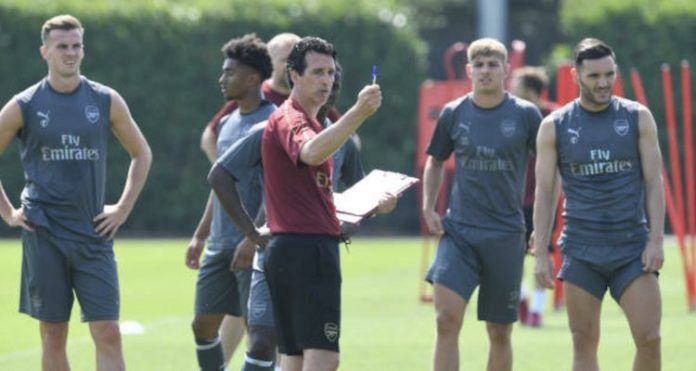 So, the signing of Lucas Torreira, which is expected to go through early this week – perhaps even today – apparently brings an end to our ‘senior’ recruitment. There was talk of a young player being brought in, and yesterday we were linked with an €8m bid for 19 year old Lorient midfielder Matteo Guendouzi.

He’s got hair like Sideshow Bob, and that’s about as much as I know about him. Considering we had been trying to bring in 17 year old Yacin Adli from PSG, I’m guessing that if this goes through, it’s something of an alternative to that, just in terms of the age/profile of the player being pretty similar. Adli would have been free, however, and €8m on a 19 year old who has played most of his football in Ligue 2 is a fair outlay.

Nevertheless, the desire to identify a young central midfield player suggests that they’re not especially confident that what we already have coming through is either good enough or ready for first team action. What that means for Joe Willock this season remains to be seen, but you’d imagine a loan move is on the cards for him anyway.

So, where does that leave us in terms of the squad? We have three senior keepers – Petr Cech, Bernd Leno and David Ospina. One of them is going, and it’s more than likely the Colombian. He’s been linked with a move to Boca Juniors as well as every club in Turkey, and I’d expect he’ll be the man to make way.

In defence we have two full backs for each position as well as a plethora of centre-halves, and up front we’ve got plenty of striking options with Aubameyang, Lacazette, Welbeck and Lucas Perez who has returned after a season back in Spain. Quite what Unai Emery has planned for him we’ll have to wait and see, but with the players in front of him it wouldn’t be a surprise to see him moved on somewhere – along with Joel Campbell who will return to pre-season training after his brief World Cup exploits. He has suitors in the shape of Lazio and Fenerbache, and frankly I think his Arsenal race is run.

Central midfield is an interesting one though. The arrival of Torreira suggests that Emery wants to play with that kind of player at the base of his midfield three, which is fine by me because that’s something I feel we’ve needed for some time. I just wonder what the alternative to him is. If, for example, he picks up an injury, what’s the plan B?

If he’s coming in to be a crucial part of the way the Spaniard wants us to play, we have to consider the fact that we might have to do without him at times. Is Ainsley Maitland-Niles going to be developed to be that player? Arsene Wenger seemed to think he would naturally become a defensive midfielder, so perhaps that’s it. He’s been given a new number and a new contract so he’s definitely part of the plans, we’ll just have to wait and see exactly where and how he’s going to be used.

Mohamed Elneny is another player who could conceivably do that job, and with Granit Xhaka and he on new terms, the midfield looks more or less set. The elephant (or should we say rhino?) in the room is Aaron Ramsey whose contract situation is definitely a thing and the longer it goes without being signed, the more of a thing it will become.

If we sign the young French midfielder, I feel like we have enough in terms of numbers but he’s very much an unknown quantity, and any assessment of him will have to wait until we see him play. If the Ramsey impasse can’t be broken though, there’s a big decision to make, and a departure would necessitate a purchase. We can’t lose that kind of quality and hope to fill the gap with what we have already.

So, we’ve got a squad that’s got plenty of options, and while I’m as excited and enthused as anyone about a new season, a new head coach and everything else, I do feel like a couple of the players we’ve brought in have question marks over them. It’s not to say my mind is made up on them, doing so before they’ve even pulled on the shirt would be ludicrous, but I don’t think it’s unreasonable to think they’ve got a bit to prove.

I’ve been pleased with how quickly and efficiently we’ve done our business this summer, but the deals we’ve done have been somewhat reflective of where we are as a club right now. There’s a lot of work to do to try and get us back to where we want to be, and I can see why they’ve brought in some of the players they have, but these signings are far more functional than they are exciting. Which, I should point out, is absolutely fine if we get where we want to with them.

We don’t have long to wait to see how it’s all going to work, and the pre-season work will continue in earnest this week. The Torreira signing could well go through today, so let’s see what happens there too.

James and I will have an Arsecast Extra for you today, but we’re not recording until this afternoon. If you do have questions or topics for discussion, please send to us @gunnerblog and @arseblog with the hashtag #arsecastextra, and we’ll do our best to get to as many as can.