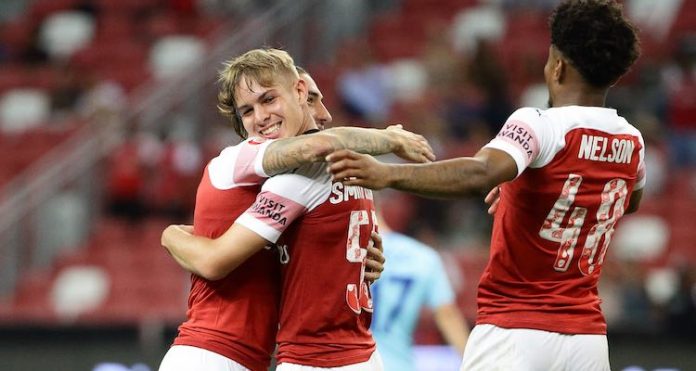 There were a few interesting bits and pieces to come out of yesterday’s game with Atletico Madrid. We didn’t learn a huge amount about things in general, but some brief observations.

The young man, who only found out he was going on tour last weekend, scored the Arsenal goal and what a goal it was too. Picking up a loose ball in midfield, he drove at the defence, and then unleashed a fantastic shot into the top corner which gave the keeper absolutely no chance. Watch it here.

In the first half the likes of Lacazette and Aubameyang had found no way past Jan Oblak, but his second half replacement Antonio Adan – who went on to save three penalties in the shoot-out – was left grasping at air as the ball flew by him.

It does seem to happen every summer that a young lad catches the eye and we all get on board the hype train (so long, The Jeff, by the way). At 17 he’s still very young, and while he’s hoping for some first team involvement this season, looking at the Europa League in particular, he’s definitely one for the future.

He’s also not called Ernie, despite Premier Sports commentators insisting on referring to him as that throughout the game. It was a veritable masterclass in mispronunciation from both commentator and co-commentator Keith Andrews, although I enjoyed the latter exclaiming “What a way to announce yourself to world football!” as the goal went in in a game watched by a motley crew of Arsenal fans and that’s about it. The ‘International Champions Cup’ isn’t quite the World Cup, Keith.

I was impressed by him when he passed the ball, and he seems to have good energy, but even in a pre-season friendly he was taught a couple of lessons about dwelling on the ball, defensive concentration, and taking risks in front of his own penalty area. He mostly got away with it, but if Unai Emery’s attention to detail is what we’re told it is, he’ll have the young Frenchman sitting down to watch replays of those moments to ensure he learns quickly. At Premier League level you’ll get ruthlessly punished for that kind of thing. Again though, at 19 he’s bound to be a bit raw, and this is just one game so no great sample size. You could see a lot of positives to his game though.

Ours were absolutely rubbish apart from Ainsley Maitland-Niles who scored with a Panenka. It’s not hugely important but something you can always work on.

It was a hot, humid evening, but the pressing was apparent as we tried to win the ball back as high up the pitch as possible, and as quickly as possible. This, more than anything, is the key feature of Emery’s approach. Formation-wise it wasn’t anything out of the ordinary, a kind of 4-2-3-1 or 4-3-3 (although we did go to a back three with wing-backs in the second half), but nothing out of the players comfort zones.

How they were expected to work on the pitch is a bit different though, and doing so in an organised, structured way is probably what a lot of the training ground work has focused on this pre-season.

Afterwards, the new boss was asked about Aaron Ramsey’s situation, and he sounded relatively confident:

And the captaincy appears to be part of the attempt to lure him to stay. The Welshman, despite being non-commital about his future, said it would be an honour to be made captain, and Emery said:

It’s not yet official, this decision, but I’ve said to you that I want five captains in the team. Then we will give the numbers for the first, second, third, fourth and fifth. Aaron has the potential to be captain.

I do think we need to know Ramsey’s intentions before that decision is made though. Handing him the armband only for him to depart next summer on a free – or even in January fire-sale – would be nothing less than bad planning. Maybe here we’ll get an indication as to what’s going to happen. If it goes to him, I’d feel a little more optimistic, because *surely* they’d have had that necessary conversation about leading the team for more than just a season.

If someone else is made captain, it’d just add to the uncertainty that surrounds Ramsey and, in my opinion, suggest he remains disinclined to sign a new deal.

So, that was our first game of the Singapore tour, the next one takes place tomorrow against PSG. I can’t wait to see Ernie Smith Rowe, Arnold Maitland-Niles, Edgar Nketiah, Reeves Nelson, Cuthbert Chambers, Ron Holding, Steed Kolasinac, Harvey Bellerin and the rest of the lads do their stuff!

Right, I’ll leave you with today’s Arsecast, chatting about that Atletico Madrid game and all the other Arsenal crack with Tim Stillman, before an interview with Tom Markham, producer of one of the most extraordinary films I’ve seen in years which tells the story of Kaiser, a Brazilian grifter who had a 26 year career in football despite being absolutely rubbish. He lived our dream! Check it out below.