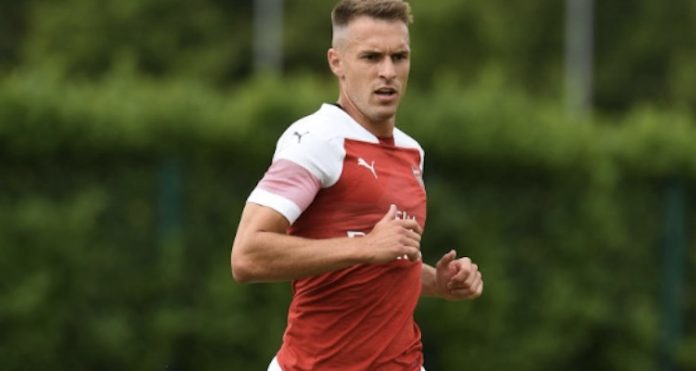 In a few hours time Arsenal will play their first pre-season game against opposition of any real consequence. We face Atletico Madrid, our Europa League semi-final conquerors, in Singapore at around 12.30 UK time, and while the results don’t really matter, it’ll be the first time many of us will see Unai Emery take charge of the team and that in itself makes it interesting.

There’s clearly a desire to see what formation we’ll play, which players he uses, and how we play (tactically). We’ve heard plenty of times about the hard work during the training sessions, and yesterday Aaron Ramsey spoke about what they’ve been doing in a little bit more detail. It’s more than just lots of physical preparation, and when asked how the Spaniard’s preparation might differ from that of Arsene Wenger, he said:

Tactically we’ve been working very hard and there’s a lot of information to take on. That’s probably the main difference.

The famous ‘high press’ could well be part of it, but we should all have a slightly more rounded view of the new boss, his methods, and what he wants from his team after we get to see them play. We’ll have details of the game and the result over on Arseblog News later on.

Speaking of Ramsey, he provided an update about his contract situation, and while he confirmed the club and his agent were in talks, there wasn’t much more than that to the update:

I’m not sure exactly [when talks will be complete], it’s taken a bit of time so far so we’ll have to wait and see.

I suppose the fact that they’re talking has to be a good sign, but they’ve been talking for some time now and there’s been no tangible progress. I remain cautiously pessimistic about this one. I really want him to stay, and maybe this is just brinkmanship in order to get the best possible deal, but my gut feeling on this one isn’t great. I hope my gut is wrong.

In other transfer news, Unai Emery says he’s open to another arrival if there’s the possibility of bringing in a good player:

I am with the players and those who have arrived this week, I am very happy with and I said at the last press conference that if there is an opportunity to try to sign one player, then we are looking.

The big question is if that one player would be an addition to what we already have, or a replacement for someone who might depart. And there’s still quite a bit to sort out in that regard, it’s a pretty big squad now, and so far we haven’t yet moved anyone on. Yesterday there were reports that The Jeff, who was not brought on tour, was set for a move to Ligue 1 side Angers.

He had a loan spell there last season and appears to have impressed enough to get himself a permanent deal. In truth, it was hard to see exactly where he’d have fitted into the squad this season, so it’s probably a good time for him to go and play regular football and develop properly. Best of luck to him, may he Jeff in peace. Others are sure to follow, details on those as and when we have them.

Then we had a development in the Ivan Gazidis situation, and while there’s a very large part of me that doesn’t even want to entertain this thing in the slightest – a saga involving the chief executive FFS – it’s a story and one made more interesting, for want of a better word, after Arsenal released an official statement about the matter yesterday. It said:

“We are aware of the speculation surrounding our chief executive Ivan Gazidis. We know he receives many offers from organisations inside and outside the game as he’s a hugely respected figure.

“He has never accepted any of these opportunities and has never spoken about them publicly.

“He has always been fully committed to taking Arsenal forward and is currently working hard in Singapore with our new head coach Unai Emery as we prepare for the new season.”

You might wonder, like I did, what exactly the point of that was. It doesn’t do anything to dampen the speculation, in fact it opens it up to even more because it’s so vague and ambiguous. To my mind, there’s a big difference between:

He has always been fully committed to taking Arsenal forward

He is or He remains fully committed to taking Arsenal forward

It doesn’t quash the rumours in any way, if anything it simply adds fuel to the fire. So, was it simply a badly-worded statement by the club, or quite deliberate because they feel they’re as much in the dark about Gazidis’s intentions as anyone else? Are they deliberately creating a bit of distance between him and them? It’s ludicrous to think that they didn’t speak to him about this so, if having done so, that’s the best they can come up with, it probably gives us some insight into the situation.

It’s worth remembering that Gazidis himself could, if he felt like it, kill the story in an instant with a couple of sentences in an official statement, or even in a quick aside to one of the many journalists out on the Singapore tour. Some might speculate he’s enjoying being the centre of attention, I can’t speak to that although I have my suspicions he’ll be happy enough to see his profile boosted by generating headlines, but there’s no doubt he’s allowing this thing to run and run when he could quash it any time he likes.

I mean, are we supposed to be up in arms about this? Please Ivan, don’t leave us?! Credit to him for the work he’s done this summer and over the last 12 months but, having been through this kind of thing countless times with players of real importance, I’m absolutely not arsed to endure it over a suit who, in 9 years with the club, has only learned to put his pants on in the last year.

Right, post-game news and all that over on the news site later, I’m back tomorrow with an Arsecast and all the rest. Until then, happy high pressing.