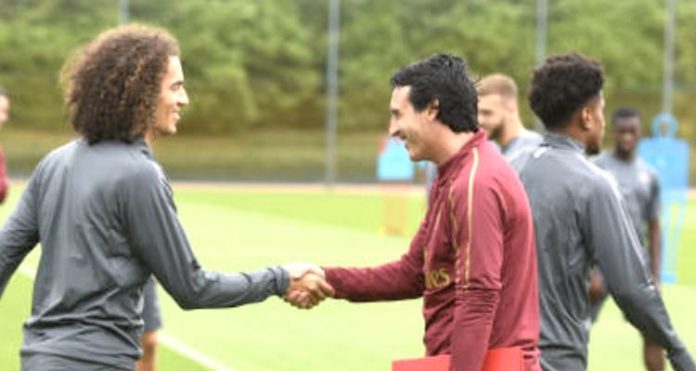 Another day, another signing. You could get used to this kind of thing. Except, of course, we’d have a 68 man squad by the start of the new season and that’d be a bit of an issue.

Yesterday we brought in young French midfielder Matteo Guendouzi from Lorient. With his curly hair and his little ronnie (top lip fuzz) you can see the youthfulness, and there’s little doubt he’s a player for the future. I suspect his initial remit this season will be the Europa League group games and the cup competitions, and if he can make an impact there then he creates a competitive environment and gives Unai Emery a decision to make.

However, I don’t think we should underestimate the step-up between Premier League and Ligue 2, and he’s still very much in the nascent stages of his career, so he’ll need time and a bit of patience, I’m sure. He said all the right things in his interview with the official site:

Arsenal have always been the team closest to my heart and a side I’ve wanted to join since I was a child. It gives me great pride – it’s incredible. I hope I can do great things here. It doesn’t get any better than coming to a club like this, with so much history, like Arsenal. I’m hugely proud.

While Unai Emery sounds pleased to have signed a player that you suspect he might have had some input into:

We are delighted Matteo is joining us. He is a talented young player and a lot of clubs were interested in him. He has big potential and gained good first-team experience last season with Lorient. He wants to learn and improve and will be an important part of our first-team squad.

Like most of you, I haven’t seen him play before, so we’ll have to wait and see how he performs to make any kind of judgement. He arrives with as clean a slate as you can possibly have though. There are few preconceptions about him because of his age and the fact he’s played most of his football in the French second division, so pre-season games in which he features will be our first real chance to take a look at what he can do.

So, our central midfield line-up appears to be complete with: Aaron Ramsey, Granit Xhaka, Mohamed Elneny, Lucas Torreira, Ainsley Maitland-Niles and Matteo Guendouzi. A decent mix of youth and experience, and certainly a range of playing styles that give the new boss plenty to work with.

The Welshman’s situation remains the last major issue involving this part of the squad though, and clarity is required on that as soon as possible. With the captaincy another key decision for Emery to make this summer, could a large offer plus the armband be enough to tempt Ramsey to sign a new deal? If not, then those at executive level who, to their credit, have acted with efficiency and alacrity so far this summer, need to make a call which may not be popular.

Nevertheless, if he won’t sign even with a big offer, then I think the majority would understand if we eschewed the distraction of a big name player in the last 12 months of his contract – as long as the money received went straight back into the squad for a quality replacement. Time is ticking though, there’s under a month until the transfer window closes so there’s no time to waste.

On the training pitch though, I’m told the players are being worked hard. Really hard. The pressing style that Emery wants his team to play requires a high level of fitness and organisation, and the chaps are well and truly being put through their paces by the Spaniard and his coaching staff. We have a friendly on Saturday against Borehamwood and it seems as if we’re going to play a stronger side than many expected, so it’ll be interesting to see who plays and, more importantly, how we play.

Meanwhile, at the World Cup England’s journey ended with a 2-1 defeat to Croatia. Despite taking the lead, Gareth Southgate’s team couldn’t build on it and take advantage against a side whose legs looked heavy in the first half. From then on though, I thought Croatia were the better side. England did very little to threaten with Kane, Lindgard and Alli all pretty anonymous, and I thought taking Sterling off tipped the balance even further towards the Croatians.

Two lapses in concentration from the three central defenders cost England the goals. As Arsene Wenger predicted, Kyle Walker’s unfamiliarity with the position would be an issue, and both Maguire and Stones were caught on their heels for the winner. All the same, reaching the semi-finals was beyond most people’s expectations going into the tournament, and I’m sure England fans have enjoyed the trip despite the heartbreak of missing out on a final.

You have to give huge credit to Croatia though, coming from behind in a third successive game to go to extra-time. That requires incredible resources of physical and mental strength. To keep going with fatigue inevitably seeping in was incredible, Luka Modric was brilliant, and I hope they can recover sufficiently in time to make Sunday’s final against France the great game it promises to be. Congratulations to them.

So, England are coming home and with it our last representative at the tournament, Danny Welbeck. He didn’t play very much, but he’ll return after some holidays looking to sort out his own future in a new set-up with a new boss and so on.

Right, that’s your lot for now. Hope the hangovers in England aren’t too bad this morning, till tomorrow.