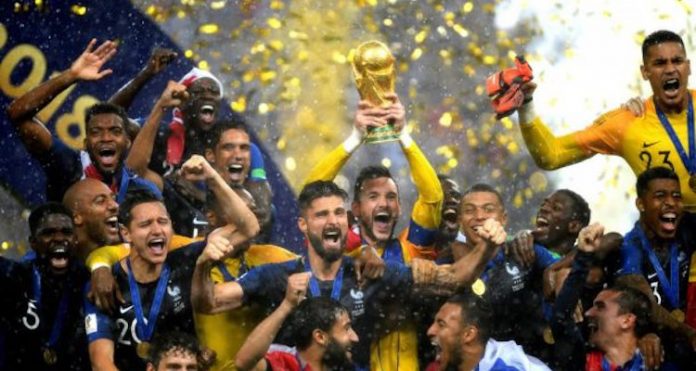 So the World Cup is over and France are champions. I know we have many French readers, so congratulations to all of you, and commiserations to our Croatian chums who will obviously be hugely disappointed today.

The first goal of the game was an own goal after Antoine Griezmann took a dive in midfield and from the subsequent free kick Mandzukic headed into his own net. It didn’t faze Croatia though and they equalised through the excellent Ivan Perisic. I’ve really enjoyed watching him throughout this tournament and although his left footed shot took a deflection on the way through, it was a goal they deserved on the basis of the game.

Then, VAR. I was watching in a bar and 50% of people thought it was a penalty, and 50% didn’t. There was no consensus from people I was texting with during the game either. Personally, I thought it was a penalty. My rule of thumb for things like this is to imagine it involving Arsenal and asking myself would I be unhappy if it weren’t.

I know it’s easier to be objective when your team is not involved, but I would have wanted that as a penalty for us if it had happened in one of our games. Still, the fact that in real life, over WhatsApp messages, and on Twitter, there was disagreement left, right, and centre. Some thought it was, some didn’t, and when given the chance to review the incident the actual referee took so long and watched it so many times you got the feeling he wasn’t entirely sure either. In the end he gave it, Griezmann scored it and France took the lead again.

It didn’t feel like game over or anything though, and I thought Croatia were on top in the second half until France scored the third through Paul Pogba. It was a sweet enough strike, but I think you can ask questions of the goalkeeper for his part in that goal and the fourth, scored by Kylian Mbappe. He didn’t seem properly set to try and make a save for either goal and there was a question over his fitness after he’d picked up an injury (maybe in the quarter-final?).

After that it was always going to be France, despite the hilarious error by Hugo Lloris which saw Mandzukic pull one back. The three periods of extra-time – basically an extra game – meant the Croatian legs were too heavy even if the hearts were still willing.

So, that’s that for another tournament, and overall I think it’s been a pretty enjoyable World Cup. I don’t know that the standard of football has been as high as some have said, but there’s been excitement, drama, and plenty of incidents and talking points. The big one, of course, is VAR, which I think has been mostly good throughout the tournament, but I do think there’s an issue with handball.

Some of the decisions involving those incidents have been wrong in my opinion, particularly earlier in the competition. Whether the rule for handball requires more clarity, or whether watching slow motion replays of handballs is impacting the referees interpretation of them, it’s hard to say, but for me that’s really been the only question mark over the use of the technology.

Now, we have to wait eight years for another summer World Cup, because of the ludicrous decision to award the next one to Qatar. That’s going to be played in November and December 2022, causing huge disruption to domestic football leagues in Europe, and I think it’s a genuine shame that they have allowed this to happen. Forget any PR nonsense about how the remit of the World Cup is to expand the reach of the game, this is yet another example that sport, and the people who run it, can be utterly corrupted by money.

The sight of Gianni Infantino sitting next to Vladimir Putin, grinning while signing footballs as if he were some kind of hero left a bitter taste in the mouth yesterday. They won’t ever kill the game, football is too much a part of people’s lives for that to happen, but they are determined to milk every last bit out of it and the fans who love it so much.

On the plus side though, we no longer have to sit through that Maroon 5 ad with Maroon 5 being Maroon 5. I’d like to properly maroon those bastards on a remote island, let me tell you. Let them have at each other like a shit band Lord of the Flies kinda thing. I bet they eat that stringy prick of a lead singer first. Not because he’d provide the most sustenance, but just so they could have some peace and quiet. Then, just when they thought they’d got that, I’d maroon the England band alongside them too to play that Earth, Wind and Fire song forever. That’s what they get for condoning that singer guy for so long.

Game of the tournament: Spain 3-3 Portugual

Player of the tournament: Luka Modric

Save of the tournament: Jordan Pickford v Colombia

Twat of the tournament: Antoine Griezmann, he has an annoying face and his diving is ming. Plus he made an announcement video about staying a club, what a pile of wank.

TV moment of the tournament: On RTE, as they were bringing out the trophy before the start of the game yesterday, commentator George Hamilton gave us this big long spiel about how only heads of state could touch the World Cup with their hands, and everyone else had to wear gloves. Then Philip Lahm just picked up, forcing Hamilton to say ‘Oh, well he’s not wearing any gloves’.

This is my TV moment because it happened yesterday and I’ve pretty much forgotten everything that came before. Feel free to chime in with your own awards etc in the arses.

James and I will be here a bit later today with an Arsecast Extra. If you have questions or topics for discussion send to @gunnerblog and @arseblog with the hashtag #arsecastextra, and we’ll do our best to get to as many as we can.