World Cup round-up: VAR and away

Because things are a bit chaotic with building work going on at the house this week, I didn’t really see much of last night’s games. However, the VARman waiting in the sky appears to have been super busy, with some controversial use of the technology last night.

This is the BBC’s football home page right now: 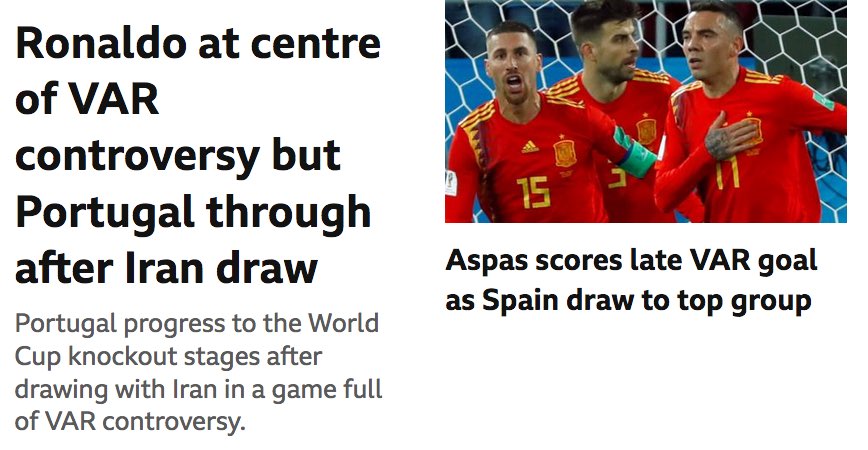 While the opening line of the Iran 1-1 Portugal report reads:

Portugal progressed to the World Cup knockout stages after drawing with Iran in a game full of VAR controversy.

You won’t get that down Hackney Marshes, let me tell you. I’ve watched a couple of the replays though. The penalty to Iran, much like the one awarded to Australia earlier in the tournament, was ridiculous. Players arms are up and out when they jump, and that was a bad decision by the referee.

I couldn’t find the Ronaldo one for the penalty, I think a yellow for his coming together with the opponent seemed fair enough, but Spain’s equaliser was surely offside. The initial decision was right and then overturned but what we’re seeing illustrated very clearly now is the subjectivity of decision making in football.

Rather than add certainty, it all still depends on the human with the whistle in the middle. With different officials last night, those games could have ended up with different results. However, the games are producing talking points as they always have. Rather than Spanish fans insisting ‘He was never offside’, we have Moroccan fans bemoaning the fact that replays showed he was, because` without VAR it would simply have been the other way around.

Wrong decisions have always been part and parcel of football, and to think that any new technology would change that is setting far too high a standard for it. I still think that for the most part VAR has been used well at this World Cup, but inevitably there have been times when it hasn’t.

Does it matter? Have we over-complicated things? Is the fact that it has become the major talking point of the tournament a worry? I can understand why for some it would be, but ultimately we’re still having decisions made by referees who are subject to human error in this way as they would be in any other.

Some of the calls have been quite wrong, and the fact that they’re wrong with the benefit of replays – something that has always been a privilege of the TV viewer – might well be construed as a problem. Is it a problem with the technology though, or could it be a way of better gauging the quality of some referees?

The benefit of the doubt that they’ve always given is that they have to make a decision in a split-second without the luxury of seeing it from multiple angles the way we do at home. That has now gone, so if they’re looking at incidents and still making poor decisions, perhaps the issue is with the individuals rather than VAR itself. We haven’t seen or heard the last of it, that’s for sure, and as I’ve said before, I think we’re going to see something really contentious between now and the end of the World Cup.

Elsewhere, Granit Xhaka and Stephan Lichtsteiner, along with Xherdan Shaqiri, have escaped bans after an investigation into their ‘double eagle’ celebration in the 2-1 win over Serbia. They have been fined by FIFA though for ‘unsporting behaviour contrary to the principles of fair-play’. It’s good news for Switzerland as they look to qualify for the knock-out stages in their next game against Costa Rica, while Serbia can also still go through as they face Brazil.

Lucas Torreira played for Uruguay as they beat Russia 3-0. He looked pretty handy, a dynamic presence in their midfield, but given they were already through, it remains to be seen if he’s played his way into their ‘first’ team. Still, it was interesting to see him in more detail, and by all accounts his deal to us should be completed after his participation in Russia is over. Also, does Igor Akinfeev have the slowest feet/reaction times of any goalkeeper?

Today there’s not a great deal of Arsenal interest with France v Denmark, Australia v Peru and later Croatia v Iceland, but Alex Iwobi could be involved at some point in the game of the evening between Nigeria and Argentina. It’s still possible for Argentina to qualify but they’ve been so poor at this World Cup they need a massive improvement to stand a chance.

There’s a good piece in the Independent highlighting the craziness of their camp and everything else, but unless they can find a great deal more than they have in their previous two games, Messi and Co will be going home. It should make for an exciting game between them and Nigeria this evening though.

Right, not a lot else happening this morning. For more World Cup chat, Arsenal involvement, David Ospina’s super-sensitive nerve endings, Per Mertesacker feeding Arsenal youth his football DNA, a dodgy magazine cover, and the dangers of too many jacket potatoes, check out yesterday’s Arsecast Extra.

All the links you need are below and if there’s any Arsenal news we’ll have it for you on Arseblog News. Till tomorrow.