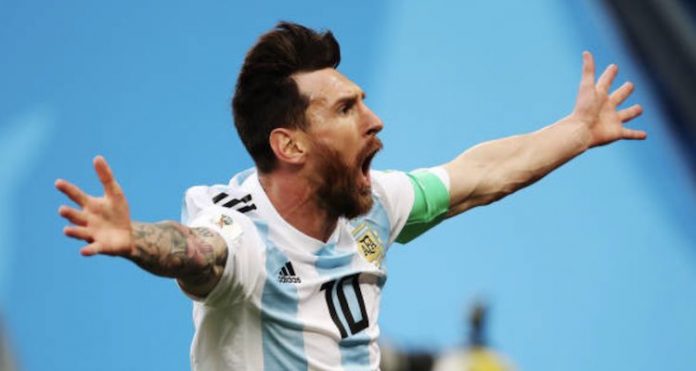 All eyes at the World Cup were on Argentina versus Nigeria last night. Could Lionel Messi inspire his country to qualify for the knock-out stages? It really felt like it was all on him, but he had a little help along the way from a player linked with Arsenal this summer – Ever Banega.

The Sevilla midfielder has been touted as a potential signing for new boss Unai Emery, and he showed he’s got plenty to offer with a solid performance and a sensational pass for Messi’s opening goal. The focus was naturally on what the Barcelona man did with it: two sublime touches then a brilliant finish with his right foot, but the precision and trajectory of the pass from the halfway line shouldn’t be overlooked.

It was a rare moment of quality from an Argentina side who are, frankly, quite bad. It’s almost sad to see the shadow of the player Javier Mascherano is at this point, while Angel di Maria showed exactly why he lasted one season at Man Utd. They seem kind of shapeless and the sight of Messi leading a team-talk before the second half began tells you exactly what they think of their coach.

Nigeria equalised from the spot after Mascherano fouled Leon Balogun early in the second half, and I thought they were unlucky not to have a had a penalty in the first half for an incident with a high foot, but for some reason that wasn’t considered by VAR. Whereas late in the game, an incident which clearly wasn’t a penalty – the ball being headed onto someone’s hand – resulted in the referee reviewing it and rightly, in my opinion, deciding against a spot kick.

All the same, we’ve seen two penalties given in the World Cup so far for exactly the same situation. You can’t call it an infringement because it’s not, and it only distracted from the fact Ighalo missed a glorious chance to score what would likely have been the winner after the ball dropped to him in the box. Marcos Rojo scored the goal that mattered, volleying home a cross from the right a few minutes from the end as if he was some kind of Nacho Monreal.

A couple of things though. One – how on earth was there only four minutes of added time? With all the usual comings and goings and substitutions etc, you’d expect that kind of additional time at the end, but there was a long stoppage for the VAR review, and that doesn’t seem to have been taken into account at all. It’s something they need to look at because it’s not right if that time isn’t taken into consideration at the end of the game.

Two – players gesturing to the referee to use VAR is annoying. This is something that is in its infancy and strict rules around it can and should be introduced from the start. Make it an immediate yellow card offence for any player who makes the charades TV gesture at an official. That would stop it from the off, rather than trying to shut the stable door after the horse has bolted.

So, heartbreak for Nigeria who were so close to going through and also saving us from the grotty site of Diego Maradona being Diego Maradona, who was as gracious as ever in victory at the end:

Throughout the game though, we were ‘treated’ to numerous shots of him in the stands, gurning his way through the match, and it’s genuinely unpleasant to see him on screen as often as that. I understand his box office appeal so maybe I’m alone in thinking we, and the World Cup in general, would be better served with less of him and more of the things that actually matter.

Elsewhere, Iceland’s fantastic voyage came to an end with defeat to Croatia, and earlier in the day I sat through France v Denmark and I will regret that for the rest of my life. What a tedious, going through the motions, load of bollocks that was. Peru beat Australia 2-0 in the other game and it’s back home for the Aussies too.

Today I’m really looking forward to Serbia v Brazil. How many times will Neymar end up on the ground at the slightest contact? There’s also the chance that there might be more than slight contact given the power and physicality of that Serbian side. In the other game in that group, Switzerland face Costa Rica and you’d imagine Xhaka and Lichtsteiner will be involved there having escaped bans.

Early today it’s South Korea v Germany – will Mesut Ozil be back in the side? And Mexico v Sweden could be interesting as the Mexicans have been one of the fun sides to watch at this tournament.

There’s nothing much happening from an Arsenal point of view, no news or rumours, but with pre-season beginning next week, hopefully things will start to ramp up in that regard.

For now, that’s that. More tomorrow.