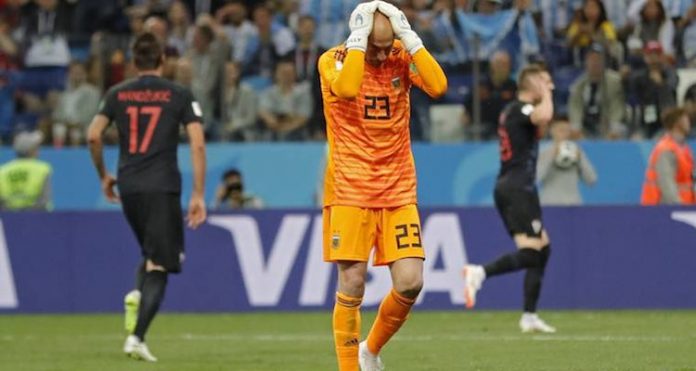 I watched Argentina v Croatia in a bar last night. The sound was off, they had music on, but not even the strains of whoever it was the DJ was playing – I’ll just say it was Groove Armada for no other reason that it might well have been but I can’t remember – could dampen the sounds of incredulity that resonated throughout the place when Croatia scored their first goal.

Not really for the quality of the finish – and for that Ante Rebic deserves some real praise because it was superb – but because of the ridiculous mistake by Willy Caballero in the Argentina goal. Attempting to dink it over the Croatian player to one of his defenders, he simply teed it beautifully for the Eintracht Frankfurt man who duly walloped it back over him and into the net to make it 1-0.

Then incredulity turned to laughter as we saw replays of it, and there’s no doubt the impact it had on the game because Argentina had been pretty poor all night, and this made their task even more difficult. All the focus is on Lionel Messi, of course, as if somehow he has to perform at a World Cup to be considered a great player.

I mean, I get that people want to see him play for his country the way he does for Barcelona, but it’s a bit ludicrous to suggest that unless he does it once every four years playing in teams of varying and often dubious competence his legacy is somehow incomplete. Not for me, Trevor, but to each their own.

Two more goals, one from Luca Modric who was so, so, so close to becoming an Arsenal player before he made the stepping stone move to Sp*rs, and the other from Messi’s club-mate Ivan Rakitic, made it 3-0 and now Argentina face the prospect of going out early. It’s not done and dusted, but if Iceland were to beat Nigeria today, that would leave them needing just a draw with Croatia in their final group game to qualify.

Big IFs though. Not to mention Argentina would need to beat Nigeria too, and the way they’ve been playing, that’s hardly a guarantee. It does make the group fun though, and today’s game between Iceland and Nigeria will be really interesting. The Super Eagles were poor in their opener and will be looking to respond, while Iceland will be thinking they can pull off anything after drawing against Argentina in their first game. All the same, if they are to make it through the knockout stages, they really need Messi to drag them over the line, but can even his genius offset the rubbish behind him?

There’s potential Arsenal interest in that one via Alex Iwobi although early reports suggest he could well be on the bench today. Aside from that Joel Campbell’s Costa Rica will face Brazil, perhaps he could add a few quid to his inevitable transfer fee with a decent performance. I don’t think there’s any doubt that he’ll be moving on this summer as the great Arsenal clear-out* continues, so if we could get something that might boost the coffers then all well and good.

Later on Granit Xhaka and Stephan Lichtsteiner are likely to be in the Swiss side to face Serbia. We’ve heard much of how the former Juventus man is a Bastardly Bastard with a First Class Honours Degree is Bastardosity, so I’m curious to see how he gets on against Aleksandar Kolarov, the tough Serbian left-back. It’s all well and good being Bobby Bastard against some wallflower of a fey, lightweight winger, but doing it against a man who looks like he can headbutt a stone lion to death is another thing entirely.

*Speaking of the great Arsenal clear-out: when you list the players who have left or departed in one way or another over the last little while, it’s quite amazing:

Per Mertesacker, Santi Cazorla, Theo Walcott, Alexis Sanchez, Olivier Giroud, Jack Wilshere, Francis Coquelin, Kieran Gibbs, Gabriel, and Mathieu Debuchy have all gone in the last 12 months. If you add the permanent move made by Wojciech Szczesny after two seasons on loan, you could make up a full team . It’s quite something really, and when we talk about all the changes that are happening behind the scenes, it’s worth remembering how much has gone on at first team level too.

In some ways, it should caution us a little ahead of Unai Emery’s first season in charge. I really think he’s going to need some time and patience to get on top of the job. Obviously I hope he comes in and starts producing straight away, but when you look at the churn of playing staff in the last year, the players coming in now and the ones still to depart this summer, it points to us being very much in a period of transition.

It’s already a big challenge for the Spaniard, and this is why I believe there’s a focus on experience when it comes to our recruitment this summer. Not entirely steady-the-ship territory, but we’re trying to ensure the players we bring in can produce straight away and that’s what you get with guys who have plenty of years under their belts.

Right, that’s that for this morning. For your aural pleasure, there’s a brand new Arsecast, chatting Arsenal comings and goings with James, and to give us some Iceland flavour of the World Cup I chat to @Antonstotle about what it means to be there, what it’s like to draw with Argentina and much more.

Listen/subscribe below. More from me tomorrow.