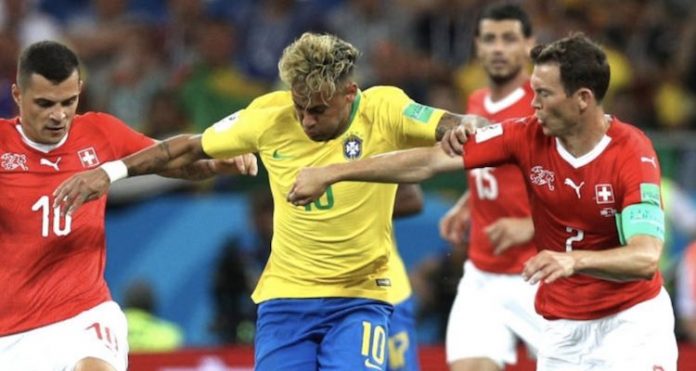 In the months leading up to the announcement of Arsene Wenger’s departure, German manager Joachim Low was one of the names being floated as a potential successor. He was never anywhere near the top of my list, and after watching Germany get beaten by Mexico yesterday, I’m double glad we went in a different direction.

Watching them struggle to break down the Mexican side and try to create clear-cut chances felt very, very familiar. We’ve seen Arsenal do that time and time again, but even we weren’t as all over the place defensively as they were yesterday. The space that Mexico had to break in, particularly in the second half, was absurd at times, and better finishing/decision making would have made their victory more comprehensive.

Mesut Ozil played the full 90, and like the German team overall it was the kind of performance we’ve seen plenty of times before. He had lots of the ball, created a few chances, but in the end wasn’t able to come with the killer pass they really needed. But then neither was anyone else, and in the end they were so lopsided and imbalanced it was hard to figure out what they were trying to do.

Not a good result for the Arsenal man though, and clearly not a good day for Low who now has to get his team ready for games against Sweden and South Korea. The other sort-of Arsenal interest in that game was Carlos Vela who looked really good for Mexico. We saw flashes of his talent for us when he was a younger man, but never anything on a consistent basis.

His love of a party was a bit a problem too back then, and his career since then has been a bit chequered.  He’s currently in MLS with Los Angeles FC and he’s still only 29, but it was fun to watch him and Mexico yesterday. When they brought on Rafa Marquez who is almost 40 I was worried they might sit too deep but that just added to the enjoyment.

In the evening the Arsenal interest came from the Swiss side with Granit Xhaka and new signing Stephan Lichtsteiner. The veteran defender showed the bastardly side of his game with a foul on Neymar who doesn’t need much of an invitation to go down screeching as if he’s been shot, but it wasn’t particularly subtle from the former Juventus man and he was booked for it.

He did ok generally against much younger and more nimble Brazilians, what impressed me most was his speed of thought which, I suppose, will go some way to making up for legs which have been around the block more than once. In midfield Xhaka did all right, nothing special either way, and it was his partner Valon Behrami who caught the eye.

Coutinho’s goal was absolutely superb, reminiscent to me of Robert Pires at Anfield in the unbeaten season (Pires’s goal was obviously better), but Brazil couldn’t really build on it. Neymar looked out of sorts with the ball, not unsurprising considering his injury absence, but as talented as he is, he’s a very difficult player to warm to in any way.

I know he gets fouled a lot but there’s something about him that screams ‘KICK ME’. If we can see it via the medium of television, I can’t even begin to imagine how strong it is when you’re on the same pitch as him. And each time he goes down, wailing, holding a bit of his body that wasn’t touched when he’s fouled, you want him to get kicked more.

Not every foul is an assault. Most of the the time they just knock a player off balance and while there’s always the desire to ensure the officials see the infraction, and he’s hardly alone in making the most of the contact, his antics just make him completely unlikeable to me.

Switzerland equalised with a second half header, and there was certainly a little foul on the defender as the corner came across. I saw people ask why VAR wasn’t used, and you can understand why. Regardless of how small the push was, it’s still a foul, and if VAR is there to catch the things the referees miss then surely this was a candidate for review.

I’m glad it wasn’t used, by the way, because I think if we go down the road of micro-managning every tiny thing we’ll open up a Pandora’s Box we’ll come to regret, but you can see why people were asking the question.

I didn’t watch any of Costa Rica v Serbia but a second half introduction for Joel Campbell, – the sixth longest serving player at the club behind Aaron Ramsey, Jack Wilshere, Laurent Koscielny, and  academy graduates Ainsley Maitland-Niles and Alex Iwobi – couldn’t prevent his country from going down 1-0 to an excellent Alexander Kolarov free kick.

Today we’ve got Sweden v South Korea, Belgium v Panama and later on England face Tunisia. Danny Welbeck will likely be on the bench there, so we’ll see what kind of a run-out he gets if any.

Not a lot happening elsewhere, but if there’s Arsenal news you’ll find it over on Arseblog News. James and I will be recording an Arsecast Extra but it’ll be a bit later than usual today. If you have questions or topics for discussion you can send them to @gunnerblog and @arseblog on Twitter with the hashtag #arsecastextra.