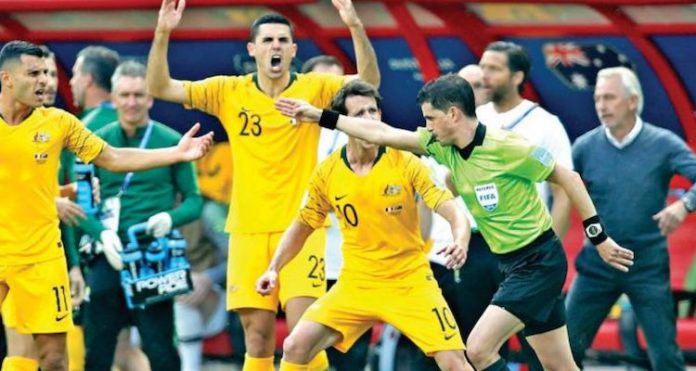 Morning, a quick Sunday round-up for you, but there’s almost nothing Arsenal related to round-up so it’s World Cup all the way really.

There was Arsenal interest last night with Alex Iwobi starting for Nigeria against Croatia, but unfortunately he and his country had a poor night, losing 2-0 in the end. He was substituted midway through the second half, and it’s fair to say he didn’t really have a great impact – but then it wasn’t a particularly good Nigerian performance in general. Hopefully he and they can do better in their next game.

I didn’t see really see very much of Peru v Denmark besides the South Americans missing a penalty late in the first half. It was a costly miss too as they went down 1-0, and penalty misses were the story of the day – along with VAR – as Lionel Messi failed from the spot against Iceland earlier in the day.

It was a pretty poor effort from a player of his calibre, but a good save and Iceland’s run of great results at this level continues. When you consider the relative sizes and – with all due respect – quality of individuals, it was an incredible point for them to take. They ride their luck a bit along the way but what they do is based on organisation and hard work, and on both of those counts they’re absolutely fantastic. Congratulations to all our Icelandic chums.

I suppose people will start the tedious stuff about Messi never doing it at a World Cup again, as if what he’s done for years at Barcelona is somehow irrelevant to his quality or reputation. I noticed some TV coverage last night doing a back to back of Messi’s miss v Ronaldo’s penalty for Portugal against Spain like the two things are somehow related. It would be good to see more from him though, so the next couple of games will be interesting.

The first game of the day was France v Australia which ended with a win for Les Bleus, but there was VAR-related talking points afterwards. The first penalty was awarded by the VAR man waiting in the sky, and I thought it probably was a penalty all things considered. The touch on the ball was tiny, and he did catch the man, but it was the fact play was called back to award the spot kick that took some getting used to.

Griezmann scored, before releasing a three part manifesto performed via the medium of interpretative dance about where he’s going to play next season, but within minutes Australia had a penalty of their own. Umtiti clearly handled the ball, again VAR was called in, and the referee pointed to the spot. I wonder why there was no card for such a blatant offence though, does VAR not deal with those issues?

Pogba was credited with the winner that required goal-line technology but it looked more like an own goal really. As for VAR, I’m still kinda undecided. I’m all for getting more decisions right, but I do wonder if, as some have suggested before, referees will become dependent on it. Like the Umtiti one, the penalty awarded to Peru was absolutely iron-clad, even in real time, yet we had a referral to the video assistants. No doubt there’ll be plenty more VAR chat before the end of the tournament.

There’s Arsenal interest of sorts in every game today. Costa Rica play Serbia and Joel Campbell is technically still an Arsenal player although I’d fully expect him to be moved on this summer. It’s double Swiss with Granit Xhaka and Stephan Lichtsteiner as they face Brazil, and this evening German play Mexico and I guess Mesut Ozil will be involved there.

Right, whatever you’re doing this Sunday aside from World Cup football, have a good one, and I’ll be back tomorrow. Till then.