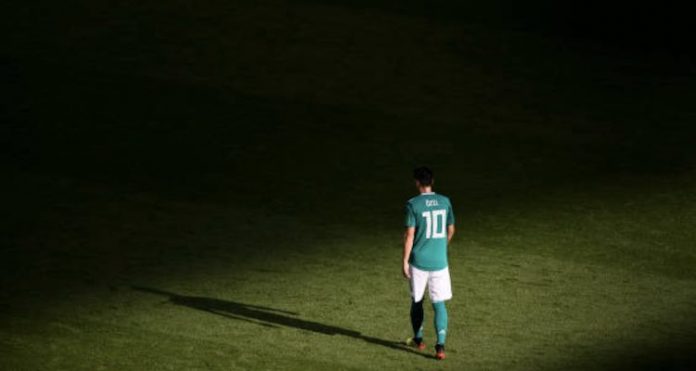 Amazing scenes at the World Cup yesterday as holders Germany were eliminated after a 2-0 defeat to South Korea.

VAR played a part again, rightly ruling the Korean’s first goal onside, and as the Germans pressed forward for an equaliser, we had the incredible sight of goalkeeper Manuel Neuer losing possession deep in the opposition half. A long ball sent Son Heung-min clean through with nobody anywhere near him and he rolled the ball into the empty net to seal the win.

This World Cup has thrown up some surprises, but this was right up there with the biggest shocks in tournament history. Joachim Low’s side have been poor throughout, no doubt, but to finish bottom of a group behind Sweden, Mexico and South Korea is not something anybody expected.

As ever there was spotlight on Mesut Ozil afterwards, with the German manager insisting he wasn’t the only one who played poorly, but it’s become de rigueur to criticise the Arsenal man. In some ways it’s understandable, he’s one of their stars, one of the most high profile players in the world and when his teams don’t do as well as they should he takes some of the heat.

We’ve even seen it with Lionel Messi in this tournament, so nobody’s immune, but in the case of Ozil he is in many ways at the mercy of his teammates when it comes to the perception of his performance. For example, had Matts Hummels headed home the glorious chance that Ozil put on a plate for him and Germany had won 1-0 – a result which would have seen them go through – he’d be lauded for being the creative force and the man who conjured up something just when his team needed it.

In yesterday’s game he created 7 chances, more than any other player in any other game at this World Cup, and yet because nobody finished one or more of them, he comes in for criticism. Like most of the German players he has been a bit below par, but three generally poor performances by that team – one of which he didn’t even play in – tells you the problems they have go far, far deeper than Mesut Ozil.

On the plus side from an Arsenal point of view, he now goes off on holidays, gets some rest and recuperation, and will return to us sooner than we thought he would. How new boss Unai Emery is planning to harness his talent remains to be seen, but you can be sure he’s going to view him as a key player in his team.

So, Germany’s exit means Sweden and Mexico go through, while in the other group Brazil top it after beating Serbia 2-0 and they’re joined in the knock-out stages by Switzerland who drew 2-2 with Costa Rica. The late penalty equaliser for the Costa Ricans was quite fun, check it out here.

Today it’s Japan v Poland and Senegal v Colombia. The 37th minute. That is my guess for when David Ospina will go down looking for his cuddles. Then the 64th minute for some reassuring second half cuddles. Then later on it’s England v Belgium which is an interesting one not simply because of the two teams involved, but also because finishing second in the group would avoid a potential quarter-final against Brazil.

I don’t think it’ll be that tactical though, and I suspect both teams will try and win it, just because they’ll want to continue the momentum they’ve built so far. There are reportedly going to be changes, so perhaps we might see a bit of Danny Welbeck at the World Cup. That kicks off this evening.

Meanwhile, there was a supporter’s club meeting last night with new boss Unai Emery and chief executive Ivan Gazidis. You can read a full report from Tim Stillman over on Arseblog News. Gazidis was keen to remind us that this is a new era, a new regime, and a new way of doing things, especially when it comes to transfers (throwing a little bit of shade at Arsene Wenger along the way too, I think):

We really have a collective effort now, in terms of how we identify players and then how we take forward our interest and of course Unai is a huge part of that as well. This is now a different way of doing things, one with a very, very accomplished team of professionals who we have spent time bedding into the club.

Unai has been in the thick of that process in terms of what we need in the squad, we’ve signed two new players so far this summer and there will be more to come. At the same time we have to manage the squad that we have, but by the first game of the season, we hope that Unai has a squad that he has had time to work with and a balanced squad that addresses all of the needs that Unai has identified.

As you would expect, the chief executive talked a lot, at length, with many many words, but Emery comes across very well I think, and I enjoyed his analogy about how he views supporters as like the leg of a table:

For me it’s like a table, a table needs four legs. One leg is the organisation, two is the players, the third is the media – we all need to see the whole picture and how we communicate, and the fourth is you – the supporters. And it’s very important that the four legs make a big, strong club together. If one leg doesn’t work, there is no table.

I can see where he’s coming from there, and I guess we’ll all have our own ideas about how strong or otherwise some of the legs are, for various reasons. Anyway, there are more signings to come, there is no doubt that this is the start of a new era, and let’s hope that it’s a successful one.

Pre-season starts next week, so the Spaniard will be getting his work underway pretty soon, and the warm-up games to this season will spark more interest than usual as we try and see exactly what it is he’s planning to do with this group of players.

Right, that’s your lot for this morning, back tomorrow. Until then, stay cool.