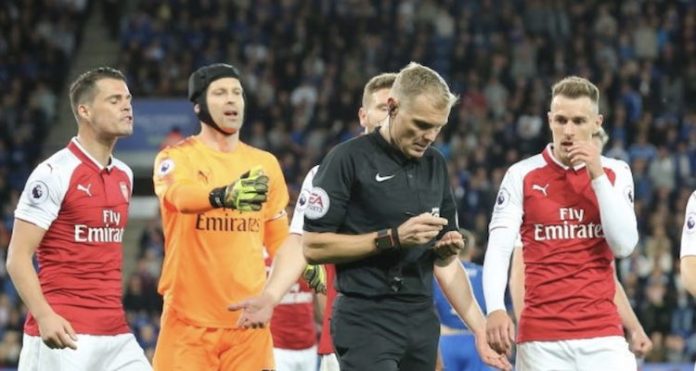 If nothing else, you have to give us some credit for our consistency away from home. Another game on the road, another defeat, making it seven in a row, and that’s our worst run of form since god knows when. Opta probably know when. Is Opta god? That’s for you to decide.

We went 1-0 down early to Leicester, Kelechi Iheanacho shinning one in after we’d failed to clear our lines properly from a corner. It went from bad to worse then when Konstantinos Mavropanos was sent off for a foul on the goalscorer. His touch was heavy, Iheanacho was heading clear towards goal and the young Greek hauled him down.

There’s no question it was a foul but was it a red card? The referee thought it was. I thought it was maybe a touch harsh, Rob Holding was there to cover and it was such a long way from goal I thought maybe a yellow might do but the colour was red and off he went.

I realise that the rules have changed this season, with players less likely to be sent off for fouls in the box which are deemed penalties, but I think the issue is how deliberate they are. If you go for the ball, miss slightly and prevent a clear goal-scoring opportunity then it’ll be a yellow whereas something as calculated as the Mavropanos foul last night will see you sent off.

It was a shame for him, because he’d played so well in the last couple of games, and Arsene Wenger took some of the responsibility afterwards, saying:

I believe when games are very close, it takes so much mental energy at the start of your career that it takes sometimes a bit longer to recover. Tonight he was a bit surprised by the pace of the game at the start, because he had not completely recovered. I had a long thought about playing him straight away again or not. Sometimes you think ‘OK, it’s going well for him, keep him in’. But I don’t think he had recovered.

After that Mustafi came on for Welbeck, and Leicester looked to take advantage of their extra man. Petr Cech made some good saves to keep the score 1-0 at the break, and in the second half – despite leaving ourselves wide open at the back as we pushed for an equaliser – we played some good stuff.

Kolasinac hit the post after what was a really nice move, and then Pierre-Emerick Aubameyang got us the goal. Ainsley Maitland-Niles drove into the box down the right and put in a good cross towards the striker. The keeper saved his first effort but he kept going to spank home the rebound. That’s nine goals since he arrived in January, playing in a team which has been struggling, so there’s got to be some excitement about what he can do next season.

We continued to play quite well with 10 men, but the referee seemed determined to ensure our away misery continued and he awarded them a penalty. Mkhitaryan’s swipe in the box looked clumsy but I’m not sure how much contact there actually was. It looked more like a dive than a foul to me, and Wenger thought similar:

The penalty is a very creative, imaginative aspect from the referee. We watched it again. It’s a nice dive but it’s not a penalty.

Jamie Vardy spanked home the spot kick and late on Riyad Mahrez put himself back in the shop window with the goal that sealed the three points for Leicester. He then handed in another transfer request written on the finest parchment with the most noble quill (actually on the back of a Strongbow beer-mat from the nearest Wetherspoons using one of those pens that has the four colours in it – he used green).

Afterwards, with now literally nothing to lose, Arsene Wenger praised the efforts of his players but suggested there’s something more to our away form than just us:

I believe we played a great game and with 10 against 11, we have shown quality in our game, spirit, and overall it’s very sad because the decision went against us and we are upset because we lost a game we should not have lost. That’s a fact we have to face. It has not big consequences but it’s just in a continuity in what we have faced all season.

One does not need a PHD in reading between the lines to know what he’s going on about here, and while we’ve definitely had some decisions go against us on the road this season, there is no great conspiracy against us. There may be some terrible officials who make poor calls, that’s as far as it goes.

Our inability to win away is in stark contrast to our impressive home form, created with the very same referees in charge of our games, so it’s reductive to insinuate that’s been our problem this season. There is a problem, but it’s our problem, and it’s one that the manager has not been able to fix despite it being obvious early in the campaign. We kept doing the same stuff and hoped it would work and it hasn’t.

Ultimately though, that’s not really a concern for Arsene Wenger beyond Sunday’s final game of the season at Huddersfield (who may well have their foot off the gas now that they’re safe from relegation). The new manager, whoever he might be, will have to find a solution to this psychological block, and the very best of luck to him I say!

So, there’s just 90 minutes left to find an away point in 2018. I know it doesn’t really matter but it would be a shame if the manager went out with such an ignominious record (more ignominious I mean), so let’s see what Sunday brings.

Right, that’s that. I’ll be back tomorrow with an Arsecast, and for those of you who want to join myself, James, Amy and Philippe for the live Arsecast Extra on Monday May 21st at Union Chapel, the tickets will be available here this morning from 10am priced £12 + booking fee. A large chunk of the available tickets went in a flash to our Arseblog Members on Patreon, so there aren’t too many left.

Hope to see some of you there. We’ll have a new column from Tim Stillman here a bit later on, and news throughout the day on Arseblog News.