In some ways the result was the least important part of the day, but Arsene Wenger will, I’m sure, be glad that his final game for the club ended with victory. For him, the most important game has always been the next one and now, for the first time in 22 years, there is no next game.

There is no next season – not at Arsenal anyway – so if you’re going to close the chapter on a remarkable career, there are worse ways to do it. On a warm sunny day, in front of an appreciative crowd – fair play to Huddersfield for how they managed it all – and with a win.

Pierre-Emerick Aubameyang’s goal was really very good. Perhaps it was lost in the overall context but the passing, the movement, the outside of the boot assist from Aaron Ramsey, and the darting finish of the striker made it very easy on the eye. That’s 10 goals since he joined now, often playing ostensibly from the left hand side, and while I’m sure Arsene will have regrets as his time at Arsenal comes to an end, I suspect not being able to work with a goal-machine like this is one of them.

Arsene Wenger: By the Numbers

The rest of the game played out, if not quite like a kind of end of season friendly, something close enough. Huddersfield came close to an equaliser a couple of times, but it was mostly about keeping count of how many times David Ospina would go down injured. As sure as the sun rises in the east and sets in west, just as grass is green, water is wet, and Jose Mourinho is history’s greatest monster, the Colombian will have a bit of a lie down once or twice a game.

Maybe I am doing him a disservice. Maybe he has extraordinarily sensitive skin and bones and every tiny collision with an opponent hurts like the dickens, but surely we’re at a point now where people will be running books on when he’ll go down. Top markets at this summer’s World Cup include: Top goalscorer, Top assist maker, World Cup winner, and like the classic ‘Guess how many pickled eggs are in this massive jar’, the ‘Guess what minute Ospina needs treatment’ market will be a busy one.

That aside, this game will live in the memory not for the football itself but for the occasion. The very end of the Arsene Wenger era. The manager bowed to the away fans before the game, saying:

It was spontaneous. I know that we disappointed the away fans this season. Many of them live the whole week and save money to travel up to games. It’s part of respect. We had disagreements, which I can accept, but we had one thing in common: we love Arsenal Football Club. I just wanted to share that with them today.

I thought it was a lovely moment. An appreciation from both sides about what the relationship has meant down the years, and I do think the vast majority of fans have always had respect for Arsene Wenger even if they have wanted things to change. There are always exceptions, vocally loud exceptions, but they’re not what this last few weeks have been about.

The manager has spoken about how sad he is that things are coming to an end, but from this remove it has appeared as if he’s he’s enjoyed the celebrations of him and his work at Arsenal since the announcement was made. He looks far less stressed, invigorated almost, and from both sides I think there’s been a considerable measure of healing.

Frustration is always most acute with those you care about, and I believe that’s been the case with Arsene and the Arsenal fans. Now though, even if it’s a decision he didn’t fully make himself, he’s realised that the time is right, and the fact he’s been able to enjoy these occasions with everyone has been wonderful to see. 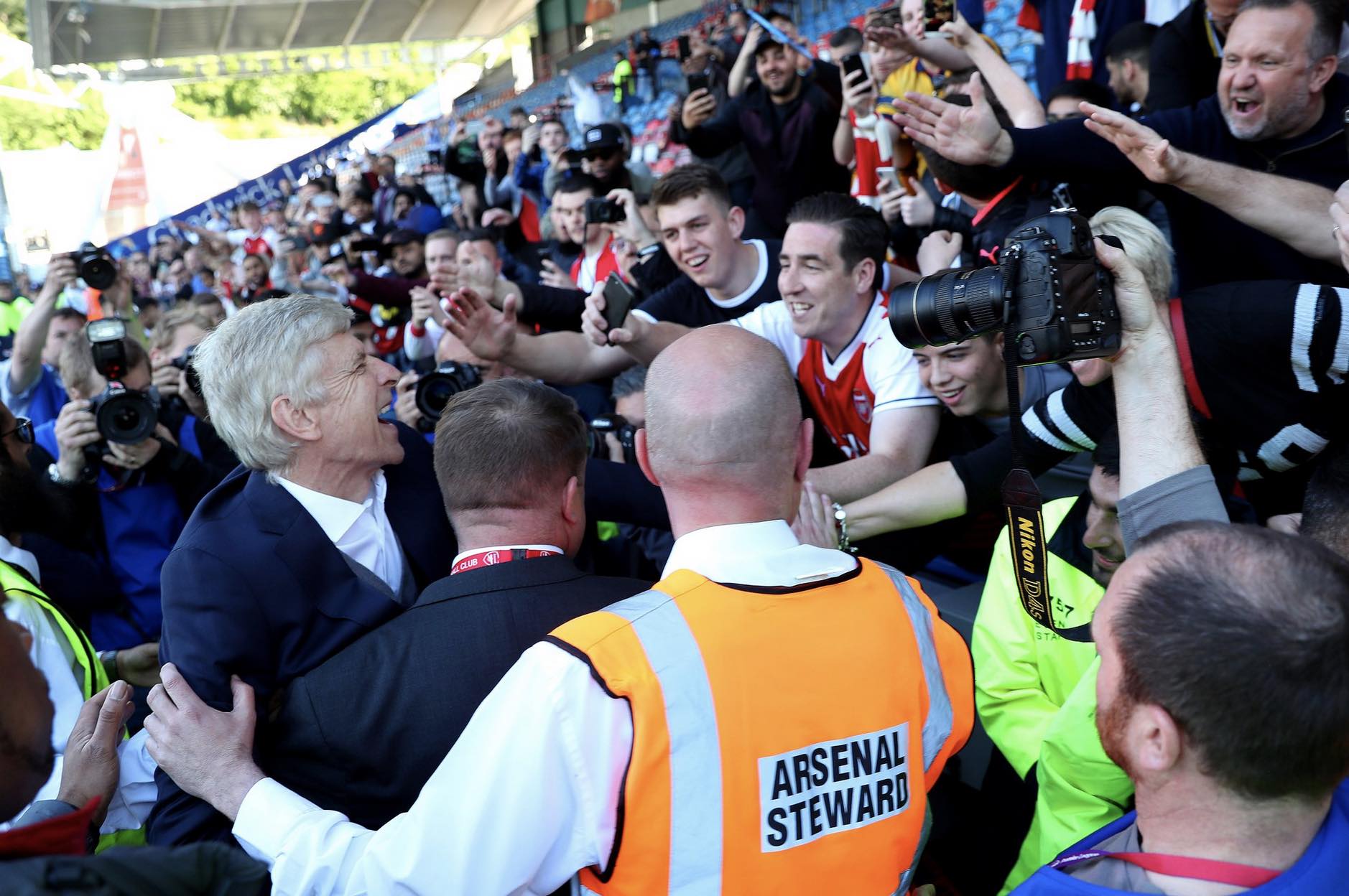 There was also something special about this final game being at Huddersfield, something Wenger spoke about afterwards. The legendary Herbert Chapman was manager there before he came to Arsenal in the 1920s and had such an impact on this football club. Wenger was not blind to that, saying:

Herbert Chapman, who was maybe our greatest manager, came from here. For me to come here on the last day had a special meaning. When you know the history of our club, for me it has a special meaning. In fact there was a photo just in front of the dressing room where Chapman smiled at me, because he was on the photo.

It’s funny how often these little symmetries occur in sport, and rather than try and argue over who was the greatest, maybe we should just acknowledge two remarkable, brilliant men who had a profound and lasting impact on Arsenal.

Wenger’s legacy to the club is unquestionable in my opinion, and while any manager will have ups and downs over the course of 22 years, what he achieved – both tangible and intangible – will live long in the memory. We’ve done the tributes over the last couple of weeks, I’ve spoken about what he has meant to me and what an impact he’s had on my Arsenal supporting life, so there’s no need to go over all that again.

Wherever he goes and whatever he does next, I hope he has a good time. I’d like to see him succeed. Whether that’s with a national team or another team in Europe, we’ll have to wait and see. This is as big a change for him as it is for us, and it’s quite strange waking up this morning knowing this is the last time I’ll ever write about Arsenal with him in charge.

No more ‘Wenger says this’ or ‘Wenger says that’. No more handbrake. No lacking a little bit sharpness. No mental strength or remarkable spirit. None of the mannerisms and idiosyncrasies that we’ve come to know so well over the course of 22 years. He’s going one way, we’re going another, and that’s the way football works.

It’s been a hell of a journey, one few of us will ever forget. From tomorrow we can start looking towards the future and what comes next, but I think today it’s fitting that we leave the final words to the man himself as he sums it all up in typically classy fashion:

It was my last game after 1,235 times, it’s maybe time, but it was a special day and the players wanted to win the game. Overall I would like to thank everybody. I had fantastic human experiences at the club, above the results. I believe that it was a human adventure for 22 years and I wish everybody well and a lot of success to my club in the future.

James and I will be recording the podcast later this morning. If you have any questions or topics for discussion, please send to @gunnerblog and @arseblog with the hashtag #arsecastextra. We’ll have that for you before lunch so stay tuned.