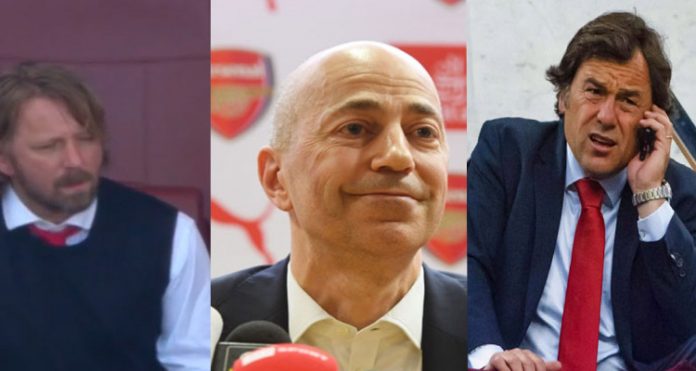 The dust has settled on what was a tremendous weekend, and we head into a week with two Premier League games which will feel more than a bit anticlimactic. It’s Leicester away on Wednesday, followed by the final game of the season – the last one ever for Arsene Wenger – against Huddersfield on Sunday.

With sixth place secured, an emotional farewell already bid to the manager, and very little to play for other than pride, it’ll be interesting to see how these games go. And by ‘interesting’ I mean that thing when someone gives you a taste of something they’ve been cooking and it’s not very nice but you can’t say that so you say ‘Iiiiinteresssting’. There’s room to hand some playing time to young players, but I suspect our 2018 away record is such that we’ll look to get some points on the board to spare us the embarrassment of a calendar year without a single point on the road.

So much of what’s been wrong with this season has been away from home, because when you take the home games into account, it’s been a decent return from the 19 games we’ve played – as the table shows:

But, we’re 15th in the away table, and that tell its own story. It’s a story that doesn’t really matter much now though, it’s going to be all change this summer, and with all due respect to our upcoming opposition, I think people will be far more interested in the two big questions: Who? and When?

Do we have someone lined up already? I really don’t know, and the latest from ‘inside’ isn’t exactly giving much away:

I saw some people concerned that if we wait until the World Cup then whoever the new manager is will have very little time to deal with transfers in what’s already a complicated window. This information also suggests that right now we don’t have a single candidate lined-up, that the push came before we knew exactly who we wanted and if they were available.

I wonder if that’s the case. When you’re dealing with someone like Max Allegri or Luis Enrique, I think the situations are more complicated because of their demands etc. Their experience might make negotiation or agreeing a package a bit more difficult. Someone a bit more low-key, however, might be easier to do a deal with, particularly if – for them – it’s the kind of opportunity a current employer would be unlikely to stand in the way of.

I can’t believe that we would instigate the departure of Wenger without having a very good idea of who we wanted and if they were available. I mean, I suppose I can because this is Arsenal and common sense isn’t always our strong point, but if we’re now being driven by this executive trinity of Ivan, Raul and Sven (the IRS?), you’d like to think they’re more on top of this and it’s out of respect to Wenger that nothing much is leaking right now.

It wouldn’t surprise me if, by the end of the week, we started hearing more concrete things, and if we didn’t have a manager/head coach confirmed by the end of the month that would be heading towards bad planning (bearing in mind the many variables that might prevent an announcement – current job etc).

Arsene Wenger’s departure is clearly the most seismic event at this club for many years, but it’s only one part of it. There’s a big, important job for somebody to take on now, and this is where we’ll see what this chief executive, this board, are made of. Gazidis has been pulling the rug of power out from under the manager’s feet throughout the last 12 months or so, it’s now comfortably under his own, so you’d like to think there’s been something of a long-game going on – which should include potential replacements for the current manager.

Going back to the transfers thing and World Cup summer: if we are in no rush to make an appointment, it probably tells us that the new man is going to have far less involvement in that regard than Arsene has down the years. Stories emerged yesterday about how Enrique and Allegri have unspecified concerns about the ‘club’s management structure, but do they really? Or is it handy for that information to come out to see them ruled out, thus paving the way for a younger coach to come in and slot in alongside Sven and Raul?

If so, it seems likely that we’re heading towards a scenario where the club brings in the players and the manager has to work with them. I’m sure there will be some input from whoever is appointed, it would make no sense to ignore their wishes completely, but a Head of Recruitment and a Director of Football (can we call Raul that now or do we have to wait until Arsene is gone?) carry out pretty obvious and specific roles.

Sven identifies and recruits; Raul gets the deals done; Ivan poses for pictures with the player holding up the shirt and releases a gushing 2000 word statement for each signing by the end of which everyone thinks they’ve heard something great but after a few minutes they’re not quite why.

It’s going to be a brave, new, interesting world. I’m not saying we’ve been institutionalised by Arsene Wenger, but he’s been such a constant that by its very nature his departure is going to mean things are done differently on so many levels. As he said himself ‘Take my strong points and find someone who is stronger in all of them’. It’s going to be a summer and a half, I reckon.

If you haven’t had your fill of football at the Emirates this week, this evening the Arsenal Youth take on Porto in the Premier League International Cup Final. Ticket info etc is here, they’re available till 3pm today priced just £4 for adults and £2 for concessions, so if you fancy getting along to see the next generation you know what to do.

Finally for today, if you haven’t had a chance to listen to yesterday’s Arsecast Extra yet, Tayo Popoola and I look back on the final home game, the celebrations, the cheers, the songs, the boos for the board, and all the rest. All you need to listen to it is below, subscribe, like, share, review etc.