Home Arseblog, the arsenal blog The empty news cycle reflective of the empty seats at Arsenal 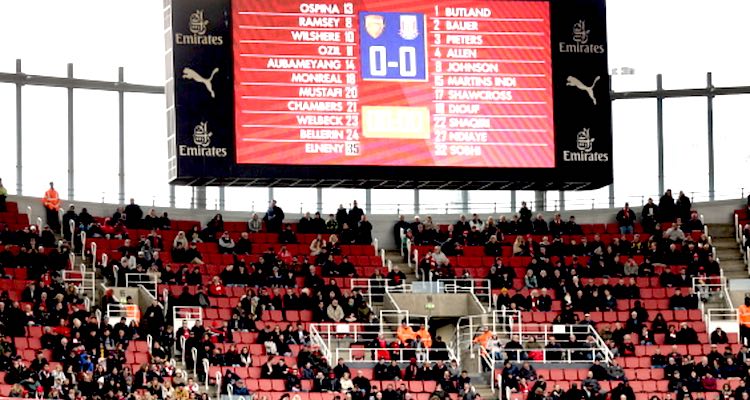 The strange atmosphere that has surrounded the club at times this season was evident again this week, as both Monday and Tuesday following Sunday’s win over Stoke were unbelievably quiet. Interlull quiet.

Normally after a Premier League win ahead of an important European game there’d be plenty going on. The reaction to beating a side like Stoke would have carried on for a bit, then you have build-up to the CSKA Moscow game overlapping with that, but bar a couple of minor things late yesterday there’s been very little.

It might be down to self-awareness. A realisation that things have been difficult and squeezing every last drop of ‘content’ out of a win against a team like Stoke is not going to do much good anyway, while accepting that the Russian side are not exactly the most prestigious opposition.

I think it was something more fundamental than that though, more tied into what’s happened this season. If the empty seats at the Emirates are a sign of the apathy felt by fans, then the nothingness of the Arsenal news feeds over the last couple of days are reflective of that.

On that, there’s an interesting piece on ESPN with some fans talking about why they haven’t attended games this season. For some it’s simply down to how poor we are and how badly we’ve played; for others it’s circumstantial – life, work, kids etc, mean it’s hard to prioritise football at times. But there’s no getting away from the fact that attendances at Arsenal are on a downward trajectory and have been for some time.

We might laugh at the announcement of 59,302 when everyone can see there’s nowhere near that many people in the ground, and the explanation is that they talk about tickets sold rather than people through the turnstiles. You would like to think, however, that the club are making note of the actual, real life attendance, because if not they’re doing themselves a serious disservice.

You have to wonder if it was a case that it was simply tickets that weren’t being sold how much more seriously they’d take it. The fact that people have spent money already and simply aren’t turning up provides this issue with a kind of cushion, because the cash is in the bank and those are the numbers that will ultimately get through to Stan Kroenke.

He doesn’t care that much about tens of thousands not going to games, because he’s dealing in millions of revenue, but they should be paying very close attention to what’s going on right now. Nothing speaks louder than fans staying away, and while there is this idea that a relationship with a football club exists in good times and bad, in sickness and in health etc, attendances are almost always tied in with performance.

When things are good, the ground is full, people are happy, the club is happy, tickets are like gold dust. When they’re not, attendances drop, there are spares ahoy, and you notice the empty spaces in the ground. That’s not just true of Arsenal, but almost every football club you can think of at every level.

So far we’ve heard Arsene Wenger talk about inclement weather, scheduling of games, and even Easter as reasons to why people aren’t turning up, but he pretty much nailed it after the Stoke game when he said:

It’s a fact that we don’t think about a lot in the Premier League. It’s just down to the fact that we’re not fighting for the championship. People know that will not change now.

We’re not competitive, therefore people aren’t coming – and I think it’s also impossible to ignore the length of the manager’s tenure and desire for something new as a contributory factor. For some it’s self-entitlement, that somehow you’re not a true supporter if you don’t go to a game, but if you’ve paid your money – and at Arsenal it is a considerable amount of money – then you have every right to stay away if you don’t feel like it. The Stoke win was fun in the end, but the 70 minutes up to that were further evidence of why people aren’t going any more.

We’ve had seasons before when it’s clear we haven’t had a chance of winning the league from pretty early on, but while there was probably some minor drop off in attendances, what we’re seeing right now is pretty much unprecedented in the Arsene Wenger era. People still came because they were entertained by the football we played, or held on to some hope that we could improve.

What we’re seeing now illustrates that for many that hope is gone, extinguished by the way this season has played out. Whether it’s a form of silent protest – and anecdotally I’ve spoken to people who just won’t consider going back until things change in a significant way – or just sheer indifference, it’s clearly a very unhealthy situation and the club have to pay close attention to it.

They can point to long season ticket waiting lists all they like, but whether it’s something we approve of or not, the people that fill a ground these days are not simply hardcore fans. Part of the reason we moved to the Emirates was to take advantage of football’s move from sport to corporate entertainment. When you can sell packages to people with deep pockets to come to a fine arena, watch a team play exciting, attacking football and face off against some of the biggest and best in Europe, there’s money to be made.

Good luck to the people trying to sell those packages for next season with no clue yet as to whether we might face someone like Barcelona or BATE Borisov. As well as that, commercial partners want to be associated with a ‘brand’ that is prestigious and speaks of success, not one that is synonymous with underachievement and empty seats.

I hope Thursday is packed and I hope that the team gives the crowd something to be excited about it, but those in charge really do need to be paying very close attention to what we’re seeing right now. Forget Easter, forget bad weather, forget the Premier League dicking around with kick off times, the bottom line is that if Arsenal were challenging for the title – or at least there or thereabouts and playing good football along the way – the stadium would not be as empty as it is.

For something to listen to this week (aside from the new Arsecast Extra), why not check out my interview with actor Mark Strong – available to Arseblog Members on Patreon? It costs just €5 per month to subscribe, and you get access to all the other stuff we’ve done there too.

Click here to join up, listen to Mark talk about growing up in Islington and becoming a fan, scoring a goal against Jens Lehmann, his one wish for Arsenal right now, and lots more. It’s a great chat and he is as cool a dude as you would expect.

Arsene Wenger meets the press later today in the build-up to tomorrow’s game, and we’ll have all the team news and more over on Arseblog News throughout the day. Back tomorrow with a preview of the game.