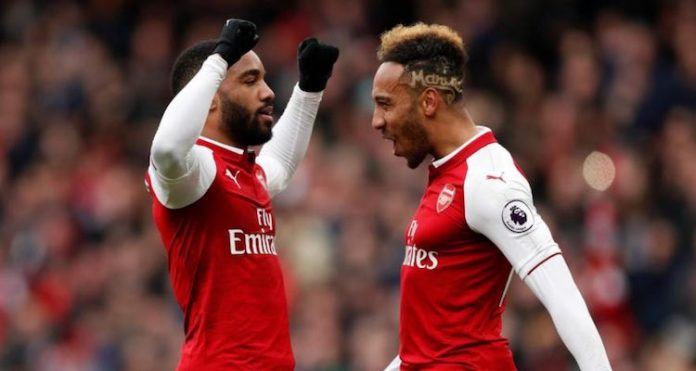 The idea of playing both Pierre-Emerick Aubameyang and Alexandre Lacazette is one which provides some excitement and intrigue at the moment. I’m well aware that this could well be because there’s little else to think about when it comes to our domestic games, but also because when you break your transfer record twice in six months or so, it seems like fitting those two players in ought to be part of a plan.

Maybe some clubs can afford to do it, but Arsenal – as well off as we are – are not in the habit of spending £50m on back-up players, or spending £55m to make someone a back-up. Even though I find it hard to figure out what exactly our strategy is, I have to believe there was at least some thought given to this when we rebuilt our attack in January.

Getting rid of Alexis Sanchez, Theo Walcott and Olivier Giroud was one thing, and you could make a reasonable case for all of them departing for one reason or another, but those decisions, along with the arrivals of Aubameyang and Henrikh Mkhitaryan must have been made with Lacazette’s recent purchase in mind.

I don’t believe that we spent what we did on the French international, decided he wasn’t up to it in less than six months, and ruthlessly went out to find a replacement. That’s just not the way we operate. One of the criticisms of Arsene Wenger is that he’s often far too willing to give players chance after chance when the evidence suggests we could go in a different direction. It would be most unlike him to have made his mind up on Lacazette so quickly, and I don’t believe that’s the case anyway.

On Sunday, during the 3-0 win over Stoke (haha) the former Lyon man came on and had a positive effect on the way we played, and on this occasion Aubameyang was moved out to the left hand side. It almost paid dividends when a brilliant run from that flank saw him dart behind the defender and a precision pass from Mesut Ozil sent him through on goal.

On this occasion Jack Butland stood up to make a good save, but it showed the potential of having genuine pace from from wide areas, and that seems to be the way Wenger sees the pair of them working. Asked after Stoke game if he could see them playing together, he said:

Yeah, I think Aubameyang played a long part of his career on the left, at St Etienne, and in the first year at Dortmund with Lewandowski, he played on the left. After, when Lewandowski moved to Bayern Munich, he played centrally.

Of course the thing is, when he moved centrally he became one of Europe’s most prolific strikers, so while he can play on the left and has done in the past, why would you play him there now when it’s obvious he’s better and more effective as a central striker? Maybe it has something to do with the fact that Lacazette is another goalscorer and Wenger feels that if he’s playing both then Aubameyang, of the two, is more suited wide.

However, it was interesting to hear what Steve Bould had to say about Lacazette in the build-up to Sunday:

So, could Lacazette be on the one to play off or wide of Aubameyang? We’ve seen him come deep in games before, even when he’s been the main striker. Frustrated at the inability of anyone to create for him, he’s tried to do that job himself, and he is technically a good player. He’s strong, passes it well, and while there’s little question that in these forwards we have two finishers first and foremost, Lacazette seems more suited to a role which requires him to be on the ball more often.

You ask yourself if he could produce more than Danny Welbeck, for example, and it would be a surprise to me if he couldn’t. Welbeck, despite his two goals against Milan, has really struggled to make any kind of impact this season. Yes, he’s had injuries but there’s a sense that you get what you get from him and when it’s good it’s quite good but when it’s not it’s frustratingly ineffective.

The other thing to bear in mind is that we can only play Aubameyang and Lacazette together in the Premier League, and as Europe hopefully becomes more and more important, it might well be a case that the latter is rested for our domestic encounters to keep him fresh for the Europa League.

What I would say though is that they seem to have a reasonably good understanding so far, and there’s a lot to like about Aubameyang being aware of Lacazette’s need for a goal and giving him the second penalty on Sunday. It speaks to a positive relationship between the two, and an awareness from Aubameyang of things that are important to the team and not just the individual.

The former Dortmund man will sit out Thursday’s game with CSKA Moscow because of his ineligibility, and I believe Lacazette will start. He’s got a big part to play in whether this season ends with success or not, so getting back on the scoresheet on his first game will be a real confidence boost.

He is going to be our main striker in that competition and without any convincing back-up because of Welbeck’s inconsistency, I doubt Wenger will take any risks if we start to get closer and closer to that trophy. That’s an understandable approach too, so it might well be a case that this question of whether they can play together, and how, is one that won’t be properly answered until next season.

For more on this, as well as general laughter at Stoke, Aaron Ramsey, Mesut Ozil’s on pitch annoyance with Hector Bellerin, and loads more, check out yesterday’s Arsecast Extra. News throughout the day on Arseblog News, more from me here tomorrow.