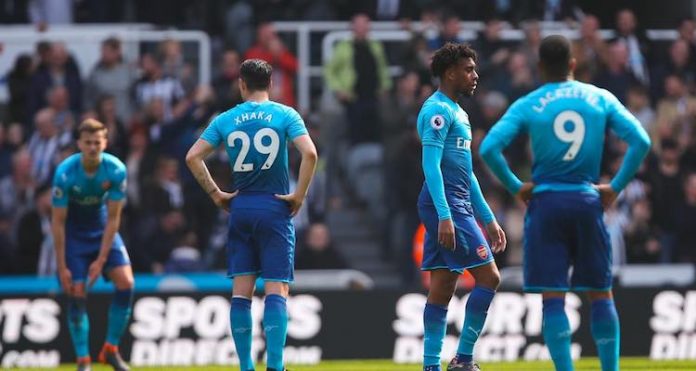 Arsenal on the road in 2018: Played 5, lost 5. To expand on that a little, in three of the five games we took the lead. At Bournemouth, Swansea and again at Newcastle yesterday, we scored first before going on to lose the game.

We are the only club in the top four divisions without a single point away from home in this calendar year, and yesterday was yet more evidence of why this club needs change. The Europa League is the only thing keeping Arsene Wenger in a job, because domestically we are abject and have been for much of this season.

The team was not that surprising. We knew there’d be changes after the trip to Russia on Thursday, and I have no particular issue with us doing that. We know that Europe is the priority, and team selections are going to reflect that more and more. We saw Alexandre Lacazette and Pierre-Emerick Aubameyang start in the same team, something lots of us have been keen to see, and it was that combination that brought us the early goal.

Shkodran Mustafi played a lovely long ball to Aubameyang, he controlled it, hooked it to the far post and Lacazette was there to finish. Promising, but unfortunately that was as good as it got for our two main attacking men. As the game continued, the decision to play one of Europe’s most potent penalty box strikers out wide looked more and more foolish.

The former Dortmund man struggled to make an impact, his pass completion of just 65% illustrates the difficulty he had, and although he drifted infield as much as possible, I just don’t think it’s the right way to use him. If this is Arsene Wenger’s way of getting his two most expensive signings into the team, he needs to go back to the drawing board.

Newcastle’s equaliser came after a long ball over the top stretched us – it wasn’t the only time that Shelvey’s passes into the channels caused us some problems – and once again Mustafi was found wanting, allowing a striker to get ahead of him to finish smartly. Some will point to Cech being beaten at his near post, and that’s never a good look for any keeper, but this was too similar to Shane Long’s goal last weekend for the German to escape criticism.

He was just too slow to react to the run of the attacker. It’s basic defending, and he was found wanting again for their second which came midway through the second half. We hadn’t looked like going ahead again, although there were a couple of moments we could have done more with, but the “defending” for their winner was just absurd.

I think Thierry Henry broke it down well on Sky Sports afterwards, pointing out that from a 5 on 3 situation – where we have the 5 – our lack of awareness and communication saw them end up with a 2 on 1 in our box, and that’s what won them the game. Nacho Monreal’s header was poor, and Mustafi simply stood watching as Slimani headed the ball back into the danger area in the run-up to Ritchie’s finish.

Ball watching at this level is ridiculous, especially for a defender whose main asset when he does perform well is his aggressive, front-foot approach. This time though, he was guilty of just not reacting and while a manager can’t legislate for players making individual mistakes, if he keeps picking players who make those mistakes then ultimately it’s on him. At the moment, Mustafi is a disaster zone, those around him aren’t much better, and we look like a side that will always concede.

Wenger’s attempt to salvage something from the game was to throw on Danny Welbeck, and latterly Eddie Nketiah, meaning we finished with four strikers on the pitch. There was no discernible shape or system though, it was just throw on forwards in the vain hope that one of them might produce a goal out of nothing. The fact that we had no platform to build up play and create chances for them seemed to me to be a rather significant oversight in this plan, and so it proved.

I suppose the thing that strikes me most this morning is how unsurprising or how unremarkable defeat is these days. If there’s a chance to snatch a loss from the jaws of victory, we’ll do it, and there’s not much to like about the way we play football either. How many times did we see players yesterday seeking movement ahead of them before having to go backwards with a safety first pass?

We scored a nice goal, we ought to have had a penalty too I should point out, but some you get, some you don’t, and we’ve had plenty in the last few weeks so I don’t know that we can complain too much about that decision. It just distracts from the main issue which is that the manager is presiding over a pretty abysmal Premier League campaign, and he remains unable to do very much about it.

This is, apparently, the first time Arsenal have lost five consecutive away games in the league since 1984, so that’ll give you an idea of how bad this current run is. Our next game away is Old Trafford, sandwiched between the two Atletico Madrid ties, and while we can all compartmentalise that and the potential team selection, it’s still not going to be much fun if a heavily rotated Arsenal side gets taken apart by United.

The manager says he’s baffled by our form on our travels, which at least makes one of us, because to almost everyone else the root cause is pretty obvious. Europe is propping us up, and I can understand why, but days like yesterday don’t do anything but solidify my belief that whatever happens between now and May, change is necessary this summer. Win it or not, Arsenal need a new manager next season.

Whether there’s anyone brave, or interested enough, at board level to make that happen remains to be seen, but if you take Europe out of the equation, the kind of form we’ve shown this season, as well as the sheer inability to address it in any meaningful way, would be enough to get any manager sacked at any other club.

Some might say this is a churlish response to a first defeat in six games, but this is about much more than that, and the longer it continues the apathy and indifference felt by so many will continue to grow. That’s a very dangerous thing, something the people who run the club should be mindful of, and they’re the ones who have the ability to do something about it.

Will they? We’ll see. You wouldn’t stick too much of your live savings on it though, would you?

James and I will have an Arsecast Extra for you this morning, discussing the game and everything else. If you want to get involved with questions or topics for discussion, please send them to @gunnerblog and @arseblog on Twitter with the hashtag #arsecastextra.

That’ll be available around noon.

Finally for today, big congratulations to the Arsenal Women who are through to the FA Cup final, the late winner against Everton yesterday was scored by Irish international Louise Quinn. They’ll face Chelsea in the final at Wembley on May 5th, get along if you can!

A last gasp winner from Louise Quinn has sealed our spot in the final of @SSEWomensFACup #WeAreTheArsenal pic.twitter.com/ING20QjsE8