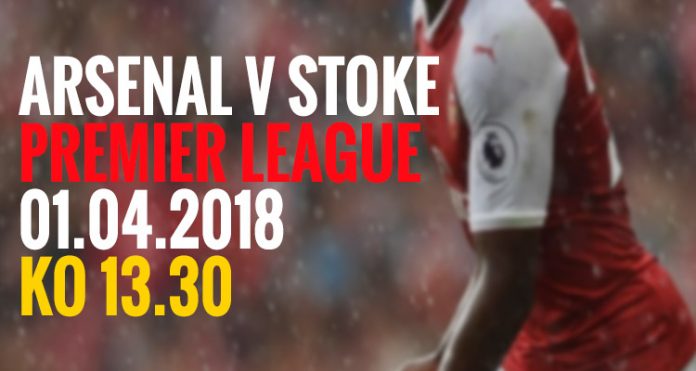 At last, football is back, and let’s hope Arsenal can make it worth the wait when we face Stoke at the Emirates this afternoon.

As we all understand, there’s little to our Premier League campaign at this point beyond building momentum for Europe. With CSKA Moscow on Thursday, the team selection today will be interesting, although I think any idea we might rest key players won’t kick in until this time next week when we face Southampton.

Then I suspect we’ll see some rotation, but for today Arsene Wenger will be keen to get his players up to speed after so long without a competitive fixture. Our last game was on March 15th – the 3-1 victory over AC Milan – and that’s a long stretch without playing at an important part of the season.

It’s hard to think we’ll do anything particularly different with our formation or team selection today. Despite a desire to see two up front, I think we’ll get what we always get, as the manager plays it relatively safe. So, something like: Cech, Bellerin, Mustafi, Koscielny, Monreal, Xhaka, Ramsey, Wilshere, Ozil, Mkhitaryan, Aubameyang.

Lacazette is back in the squad, and really should get some minutes today if we want him to lead the line on Thursday, and we’ll obviously look to continue from where we left off before the Interlull. The three wins, over the Italians and then Watford, was the first time we’d won more than two games in a row since October, and while you couldn’t say we had made everything right, we were at least going in that direction.

Although Chelsea and Sp*rs play straight after us and one of them is going to drop some points one way or another, we need to look over our shoulders as Burnley’s win yesterday puts them within two points of us. I don’t know that finishing seventh rather than sixth changes the complexion of our season in any significant manner – either way it’s an underachievement and it wouldn’t change my opinion on what should happen next.

But, for professional pride, it should be something the players are aware of today. The other thing that lends today’s game a bit of an edge is the history we have with Stoke, and have had down the years since Aaron Ramsey had his leg broken. If an Arsenal win today contributes to their struggles and pushes them closer towards relegation, then I’m all over that.

It might be considered petty and small, but it is what it is. There’s not much pleasure to be gained from what’s left of this season in the Premier League beyond inflicting misery and defeat on others. Our record against them at home is excellent – 12 consecutive wins – so let’s hope there’s another one today, and that the points we take matter when it comes to who goes down.

What else is there to say about this one? As Steve Bould said a win is important for momentum and our European games, but there’s also the danger that the focus is too much on Europe and players protect themselves for that a bit. Hopefully that’s not the case.

Is it worth wondering about attendance for today? Fans have stayed away in droves this season and much more notably in recent weeks. I’m not sure that Arsenal v Stoke is the kind of fixture that will put bums on seats, and it is something the people who are running the club should pay very close attention to.

Anyway, here’s to a the return of football and the hope that after such a long wait Arsenal won’t Arsenal it up today, and we have 90 minutes to enjoy before things get more serious on Thursday.

If you can’t see the game for some reason, remember that we’ll have a live blog for you with up to the second text commentary, clips and more. You can check back here for a post with all the info later, or simply bookmark our live blog page and updates will begin automatically.

Catch you later for the game, and if you haven’t had a chance to listen to this week’s Arsecast yet, you can check it out below, as well as an interesting update on the Aaron Ramsey contract situation.

Also, if you want to win a subscription to The Gooner and help the printed version of the fanzine, check out Goonerholic who can do just that for you.