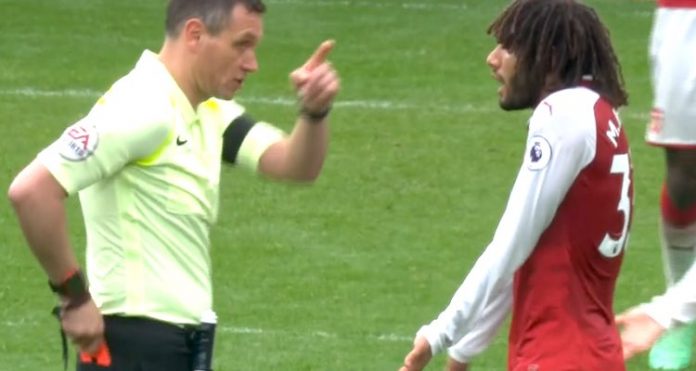 When I first saw the Mohamed Elneny sending off on Sunday, I thought it was harsh. It was a bit of a push but nothing that merited a red card. Given that we only saw one replay of it, that was a point of view I maintained until I saw it from a different angle.

Match of the Day 2 had it, and if you watch the video you can clearly see him push the Southampton player in the face and while it’s still fairly tame, it’s always going be a sending off if the officials spot it, which they did. A pretty stupid, needless sending off too, because there was no need for him to get involved there.

It’s out of character too. If it had been Jack Wilshere, for example, you wouldn’t bat an eyelid but Elneny is usually a fairly easy-going, sensible chap so this was not what you’d usually associate with him. I did ask Arsenal yesterday if we were going to appeal the card and got no reply, but I think it’s pretty obvious now that we can’t/won’t, and it’ll be interesting to see if Elneny’s suspension has an impact on the team for Thursday night.

We’re light on central midfield players as it is. The fact that Aaron Ramsey wasn’t even in the squad for the Southampton game tells you that he’s not going to be risked for Premier League action as long as our Europa League campaign is ongoing. We know he had a little procedure during the last Interlull, but it appears obvious that the Thursday – Sunday – Thursday schedule is not going to work for him, so being cautious is sensible as we nurse him through until the end of the season.

That leaves us with Xhaka, Elneny and Wilshere – but the latter hasn’t really been played as a traditional central midfield player that often. He’s often further forward, a sign perhaps that Arsene Wenger doesn’t feel he has the fitness or stamina to play in what would normally be considered his natural position?

Elneny is cover for Europe, but a starter now in the league because his of his reliability. It lets the manager rest others, and that option is now gone. That leaves us with fewer options for the next three games, and it could mean Wilshere missing out on Europe as a consequence.

A natural way to offset the absence of Henrikh Mkhitaryan on Thursday is to use Danny Welbeck, boosted in confidence by his fine performance against Southampton, while Alex Iwobi could easily slot into the role played by Wilshere in midfield. That would leave Jack fresh and ready to play centrally against Newcastle at the weekend – (making the assumption that Ramsey won’t be used again).

The only other option for the manager at this point is to give more playing time to someone like Joe Willock who has made 9 starts this season in Europe and the cup competitions. He’s looked promising, so if he, like Reiss Nelson, can get more minutes domestically it might stand him in good stead.

The absence of Ainsley Maitland-Niles through injury is untimely for the 20 year old, who has established himself throughout this campaign with 23 appearances. Wenger has picked him in big games, sometimes at the expense of a senior player who is more naturally suited to the position he’s been picked in, but at a time when a door has been opened for him to play in the central midfield area the manager believes he’ll make his own in the future, he appears to be sidelined.

What this does illustrate in general terms though, is how weak our squad is in midfield. I’m not saying Francis Coquelin was the greatest player of all time, but he was handy squad fodder for moments like this. I have to assume that our decision to sell him without bringing in any kind of replacement was made because we had faith that the young players in the squad – like Maitland-Niles and Willock – were capable of stepping up.

However, with Wilshere’s future very much in doubt, and Ramsey’s on the cusp of real uncertainty as he heads towards the final 12 months of his contract, there’s a lot of work to be done here to ensure that a key area of the team is as strong as it should be. Leaving aside the fact we’ve struggled to make central midfield work as well as it should for at least two seasons now, we just don’t have the numbers.

Wenger, after the Southampton game, pretty much ruled out any attacking arrivals this summer – which is understandable given what we did in January on top of the signing of Lacazette last summer. That can only mean that the focus and planning (haha, I know) will be on midfield and defence, and probably goalkeeper too.

And while it’s easy and understandable that we chuckle at the idea of Arsenal using a plan and strategy for our transfer business, what we have now that we haven’t had before is a Head of Recruitment, and that’s literally his job. Backed up by the Definitely Not Director of Football (DNDoF), Raul Sanllehi, we have someone to make the deals happen who won’t miss his flight or get the runaround in Costa Rica trying to sign a lad who ultimately couldn’t play for us for years and when he did wasn’t really that good despite trying his best and providing some nice moments here and there.

This summer will be a big test of their credentials. At the moment we’re all clinging to the hope that they can help make things happen with greater efficiency than we’ve seen in the past. It’s a World Cup summer too with a truncated transfer window, so there’s a lot to do and less time than normal to do it in. We’ll see what they’re made of soon enough.

In the meantime, Elneny’s foolishness gives the manager plenty to think about ahead of Thursday and for the next couple of Premier League games. I’ll have more on the CSKA game tomorrow, and for now I’ll leave you with yesterday’s Arsecast Extra discussing the Southampton win, Welbeck and Iwobi, and great HBO villains. Listen below.