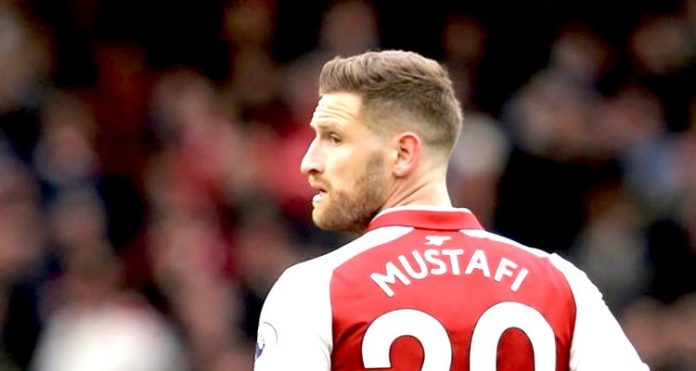 I think we can safely expect this to be a quiet week, unless something unusual happens. With no European game, and another away defeat to contend with, we’re going to be in radio silence mode as a club.

There’s not a lot of room for delicious content when you’re losing games on the road with the kind of frequency we are. People will ask if it’s a tactical issue, a confidence issue, simply an exceptionally bad run of form, or something else. And it’s probably all of those things, with a smattering of individual mistakes throw in for good measure.

I know I’ve highlighted the issues that Shkodran Mustafi is having at the moment, and it reminds me of the early part of the season when Granit Xhaka was similarly a liability for a period. Every time he made a mistake it was punished with a goal, and there’s no doubt the German is going through something similar.

He’s making mistakes in key areas, and at this level when you do that there’s generally little mercy. Under any normal circumstances, you’d take him out of the side, but such is the dearth of options at centre-half that’s a difficult thing to do. An obvious solution would be to return to three at the back, a formation that seems to suit the defenders we have much more than a central defensive pairing, but the main drawback to it is the manager’s lack of real belief in that system.

Also, we are just as capable of defending badly and conceding poor goals playing with a back three as we are with a back four. I don’t really think it’s about a system or a formation, it’s about players being drilled properly to deal with the kind of challenges the opposition will present us with. How is it, for example, that long passes from deep from any player who can hit the ball with some distances and accuracy leaves us absolutely stretched wide open as a team?

We saw it against Newcastle on Sunday. Time and time again they hit it from deep, we’re turned practically inside out. If it happens once or twice, fine, but you react to it and you ensure that you don’t keep getting caught out. We have no real ability to do that, the leadership and guidance doesn’t come from the sideline and it definitely doesn’t come from anyone on the pitch.

We rely on players winning individual duels to ensure that these situations don’t become that dangerous. If you go back to the 4-1 win over CSKA Moscow a couple of weeks back, one of the reasons Mustafi had a good game was the amount of interceptions and tackles he made. It’s eye-catching when a centre-half wins the ball back when an attacker is bearing down on him, but it ignores the fact we’re leaving him in that position in the first place.

I think you could go back to Mustafi’s good games this season and pick out very similar scenarios playing out. We need him to react, to make a last ditch tackle or block and he does it, and that reflects well on him. Which isn’t to excuse the individual mistakes he’s made in recent weeks, but I think we really have to look at the lack of protection our centre-halves get in general and acknowledge that this is a fundamental part of why this is a team that has conceded a whopping 45 goals in the Premier League this season.

I always think back to the interview Sebastian Squillaci gave when he left Arsenal after three really unhappy seasons. Remember, when we signed him from Sevilla he was a French international, used to playing for an exciting team who generally did well in La Liga and who won European trophies with him at the heart of the defence.

And yet his time with us was little short of disastrous. Some of it is on him, for sure, and he spoke very candidly about that afterwards. But it’s far too simplistic to blame individuals for being ‘shit’ and not wonder if we’re contributing to that because of the way we play. After joining Bastia, he said:

“It’s always been difficult for central defenders at Arsenal. You can see that from before my time and after my time. The style of play was a bit like Spain’s. It was very open, and often we found ourselves defending in the middle one on one with the opposition attackers. It was never easy. It was very attacking. But that was the club’s philosophy.

“I talked about it with coach Wenger. He told me, ‘I know it’s difficult, but I want us to play like this, I want the attacking players to have more freedom and less defensive work’.”

To be fair, he acknowledges there was an improvement for a time, but I think we’re back to where we were because Wenger’s fallback philosophy is to attack. It’s not that defending is an afterthought, but it’s not his strength and in some ways he views a good attack as the first part of defending – i.e they can’t score if we have the ball.

The major flaw in this plan is that we no longer possess the quality to control games and dominate possession, and we don’t score enough goals to offset the defensive flaws. So while Mustafi drives me mad because of his mistakes – and also because we’ve seen enough good stuff from him to believe there’s a better player in there than the one we’re seeing right now – we can’t look beyond the way this team is set up.

If ‘Mustafi is shit, we need better defenders’ is the extent or our defensive analysis, then we’re going to get nowhere. Because the next guy will come in and unless he’s some kind of superhuman, he’s going to get found out too. It’s why Laurent Koscielny deserves huge credit for developing into a such a fine player just his time here. He was able to cope with the demands of Wenger’s footballing philosophy, and maybe we credit the manager for identifying a player who could fit into it so well, but as the French international’s physical issues have caught up with him, it’s made him less able to cope and he looks more ordinary.

Anyway, expecting Arsene Wenger to change the way his team operates at this stage is pointless. This is a leopard who cannot change his spots. We see some attempts, his flirtation with the back three for example, but they are only temporary and he always reverts back to the default position.

We had an interesting question on yesterday’s Arsecast Extra about which players had done better than expected this season. We had Ainsley Maitland-Niles (about whom little was expected before we got this campaign going) and Mohamed Elneny. Some have done more or less what you’d want them to, but when you go through our squad, the majority have been below expectations to one degree or another.

Is it that all our players are terrible, or is that we have a style of play that makes them struggle? Do we play to the strengths of the players we have? Is there something about our structure and organisation (or lack of) that is contributing to their problems and performances? I think it’s very much the latter, and this is not a problem that is fixable with transfer funds or player recruitment.

I’ll leave you with yesterday’s podcast, and for some extra reading this morning, check out Jeorge Bird on Arseblog News as he looks at the five most promising players from the U18 side that made it through to the FA Youth Cup final for the first time in 9 years.