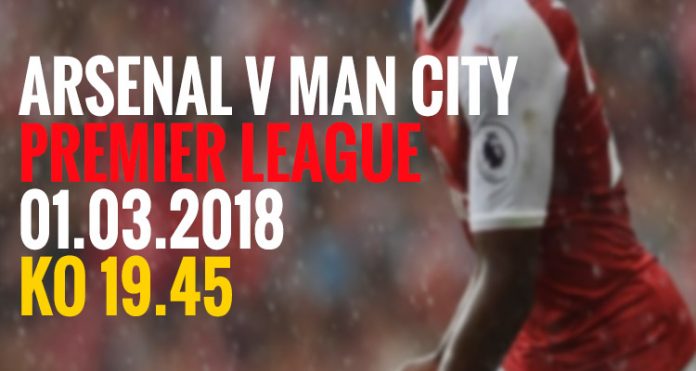 We’re back in the saddle tonight with Premier League action against Man City. Having lost the Carabao Cup final to them on Sunday, they’re about the last team I’d want to be playing right now, but such are the quirks of the fixture list.

In terms of team news, we’ll be without Nacho Monreal who will be missing for at least two games, and maybe more, with a back problem. That should open the door for Sead Kolasinac to return to the side and try to recapture some form/confidence, but it wouldn’t surprise me if Arsene Wenger used Ainsley Maitland-Niles either. Not because he’s better or more suited but because it’s hard to understand what we’re trying to do these days and how we’re trying to play football and that kind of decision would fit into that perfectly.

I mean, what do we do with midfield tonight? It was held at arms length at Wembley by a City side that didn’t have to work very hard to do it. Same guys but tell them ‘Go have another go, but be better!’? Or change it up a bit? What kind of changes can we make anyway? Mohamed Elneny is about the only experienced midfield player we could bring in, and while he’s tidy and generally efficient in possession, will that be enough?

Henrikh Mkhitaryan is available, so that should see him back in the team to link up with Mesut Ozil and Pierre-Emerick Aubameyang, but is he the man to make the difference and turn what was a flaccid performance on Sunday to one which can trouble a team currently 27 points clear of us in the Premier League?

I think it’d be a hugely optimistic outlook to think that way, and while football can always surprise you, it’s hard to look at the players we’ve got and the form that we’re in and see beyond another disappointing night. I’m very open to a nice surprise, I should point out, but it’s going to take something a bit special and I worry that we’re just not capable of that against a team like this.

At his press conference yesterday Arsene Wenger’s future was brought up, much to the ‘amazement’ of the manager himself who said he can’t understand why, when he talks all the time about how he sees out his contracts, he’s asked about this. To be fair to him, that has been his consistent line down through the years, but he knows fine well why he’s being asked about it.

If Arsenal were winning games and playing the kind of football that was long the trademark of his tenure at the club he wouldn’t be quizzed about it. Personally, I didn’t really have any issue about how he dealt with those questions – you can read a transcript of how it went down here – because who among us would like to taken to task over our jobs in such a public manner?

He is pretty restricted in what he can realistically say, especially when he’s trying to find some way to get his team to respond ahead of what’s going to be a very, very difficult game, so the safety net of respecting his contract allows him, more or less, to bat away the questions without really dealing with the issue.

What I thought was particularly unconvincing about his press conference yesterday was how he dealt with questions about the Carabao Cup final, the defeat to Östersunds FK and our current form. He called for ‘perspective’, saying:

And on losing to the Swedish side in the Europa League:

Again, there is no perspective. We won 3-0 in the first game, what you want in the two legs is to win the game and I accept we had a big disappointment on Sunday. But you cannot come out with the game against Östersund because we qualified.

I get that we went through, but to say we shouldn’t look at a defeat at home to a side like that is wrong, in my opinion. Perspective is the fact that Arsenal have won just four of their last thirteen games, and have been beaten six times in 2018 alone. We’ve lost to Bournemouth and Swansea and Nottingham Forest and Östersunds FK. We could have been absolutely hammered in the North London derby if it weren’t for Petr Cech and poor finishing, and we lost a cup final in a hugely disappointing way.

As I’ve said before, losing a final in itself is not a disgrace, especially to a team like City, but it was the manner of that defeat which which was so disheartening. You can look at almost any single game and find a reason why we lost or dropped points. A refereeing decision, bad luck, missed chances etc etc, but perspective is looking at those games in a wider context and right now that wider context shows us a team which is playing poorly and a manager who appears unable to do very much about it.

That’s why there are difficult questions about the team and about Arsene Wenger’s future. This is a non-issue if you’re winning games and you’re competitive, but when you’re struggling the way we are – and you have to be wilfully blind not to see that we’re having a very difficult time at the moment – it’s normal and right for questions to be asked.

He even admitted that himself, saying:

My job is to protect the players and to get them to focus on the next performance. I am responsible. I get the plaudits when it goes well, so I have to take the bad when it doesn’t go well. It’s part of the job.

Some might say he’s too protective of the players and I do think they have to take some of the responsibility too because no manager can legislate for Mustafi doing a Mustafi the way Mustafi did a Mustafi on Sunday, but it’s tacit admission that he understands the realities of his situation.

Maybe he’s shouldering the burden, taking it away from his players as he tries to get them refocused for tonight, but whatever the truth of it, it simply adds to the sense that there’s a lot wrong behind the scenes and that we’re struggling, as a club, to make it right.

Finally for today, if you read between the lines of this Jack Wilshere story, it suggests that Arsenal have gone as far as they’re willing to go in terms of a new contract, and that it’s not acceptable to the player. Quite where that leaves us is open to question, but with just four months left on his current deal, time is well and truly running out.

Assuming weather doesn’t rule the game out later on, we’ll have a live blog for you, plus all the pre and post-match stuff on Arseblog News. Until then.