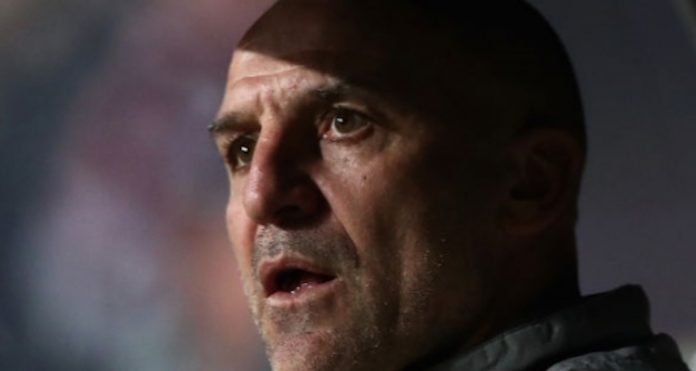 Morning everyone. I was hoping to have tall tales and great stories from the manager’s press conference to work with this morning, but apparently Arsene Wenger has lost his voice and he was replaced at the last minute by Steve Bould.

I’ve seen plenty of people ask the question ‘What does Steve Bould do?’, and I can tell you the answer is: really short press conferences. He looked like he would rather have been trying to find a way out of a Martian’s bum than be there in front of the assembled press. The range of ‘I don’t want to be here’ faces he had during the six minutes or so was actually pretty impressive.

That’s really just the tip of the iceberg, but I enjoyed it immensely. There was some perfunctory team news – Wilshere fit, Lacazette back but his involvement for Sunday not yet decided etc – and some vague questions about our approach to the rest of the season, but then it was all about Arsene Wenger, Bould’s relationship with him, the future and all that.

None of which we ever going to get us anything other than what we got – which was the assistant manager saying he admires and respects the manager. Quite what else you would expect with that line of questioning I don’t really know, but he played with a straight bat and then after a few minutes that was that.

In some ways it’s a shame that there weren’t better questions, because it might have been interesting to ask hear from someone different about some of the issues we’ve had this season. Like, when one of the club’s greatest ever defenders – and I put him up there with best I’ve seen at Arsenal – is sitting in front of you, would a question about our defensive issues not seem like a good idea?

What does a man who was part of one of the most well drilled defences ever think about our approach to defending? Again, he’s not going to say ‘We’re shit’, but surely with the right questions we might get some kind of insight into the way we operate, what we can or should expect from individuals and the collective? Instead, the vain hope that he might say something that could lead to a back-page splash drove the questioning and it was as tedious as the Interlull that has just gone.

Going back to the start though, and the ‘What does Steve Bould do?’ thing, it’s an odd one for me. Wenger’s critics will point to his autocratic nature and unwillingness to delegate as one of his flaws, yet still wonder why the assistant manager doesn’t have any influence. It’s well known that the manager is in full control of our training sessions – as he always has been – and that nobody can influence that in any significant way.

They are timed by the second, it’s Arsene’s way of working, and that’s the reality of it. So why do people expect Steve Bould to be a miracle worker in the confines of this set-up? What does he do? As much as he’s allowed by a manager who maintains that approach to his training sessions.

The other thing that strikes me is that at no other club is there such focus on the assistant manager when the actual manager is performing poorly. Nobody asked what the assistants to Louis van Gaal or Ronald Koeman were doing before they got the sack. Unless there’s some serious personality conflict between an assistant manager and the players, or some other extraordinary set of circumstances, nobody ever points the finger beyond the manager when things are going badly. Except at Arsenal.

It’s a bit mad really, but then as a club we’re a bit mad. As I said yesterday, we’re not really normal, an outlier in the modern football world, and I think the Steve Bould stuff is part of that. Anyway, it was a different face and let’s hope he doesn’t look quite as crotchety on Sunday when he’ll be sitting beside Arsene Wenger hoping we stick a bucket full of goals past his old club.

For some extra reading this morning, Tim Stillman looks at Alex Iwobi and his place in the team, and for traditional Friday listening today’s Arsecast is below. I chat to Rory Smith about Jack Wilshere, Arsene Wenger, the backroom executive shift and lots more. Listen and subscribe below, and have yourselves a good Friday.