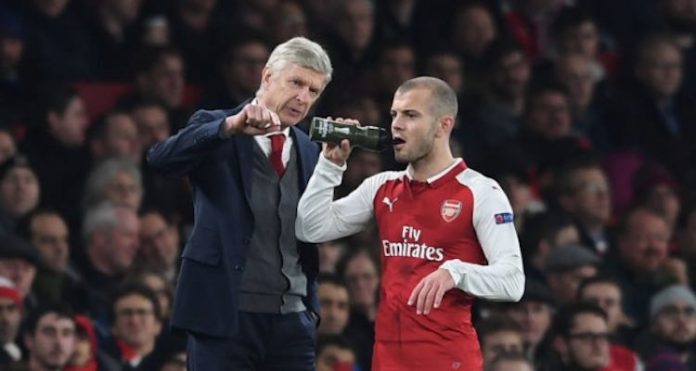 Last week Jack Wilshere was recalled to the England squad for the first time since 2016, although the last time he played for his country was against Iceland at the European Championships in the summer of that year.

Since then his career has taken a few different turns. Firstly, he decided to go on loan to Bournemouth which I still think was a bad idea. It felt a bit impetuous at the time, a decision reportedly made because he was frustrated at not being named in Sam Allardyce’s first (and only) England squad.

He was making his way back from injury (again) and felt that with Aaron Ramsey, Granit Xhaka, Santi Cazorla, Francis Coquelin and Mohamed Elneny as midfield options that his playing time would have been minimal. Even so, he’d been involved in both our opening league games, but rather than stay he decided to drop down to a team battling against relegation rather than stay with one that – at the time – we hoped would fight for the title.

That said a lot, and when you look back at it now it seems even more foolish. Concerns about playing time were understandable, but he should know Arsenal better than anyone. On the opening day Aaron Ramsey did his hamstring and missed over three months; by October Santi Cazorla’s injury nightmare had begun and the Spaniard has still to play for us since; while Granit Xhaka’s disciplinary issues saw him miss plenty of games.

When you consider that the make-up of our midfield had yet to be decided, there was every chance Wilshere could have forced his way into the reckoning if he’d had a bit of patience, but he went on loan and did ok on the south coast. However, towards the end of the season he wasn’t starting games anymore. Then he broke his leg in a challenge with Harry Kane and he was back to square one again in terms of his fitness.

This season he’s played 31 games, having begun the campaign very much in the second string playing Europa League and Carabao Cup, but the 26 year old spoke yesterday about how Arsene Wenger was prepared to let him last summer. He told the press on England duty about the conversation he had with the manager:

It was an honest conversation. It had been boiling up for a while. Everybody knew I had a year left on my deal and had been out on loan, got injured and wasn’t really in his plans.

He just said: ‘At the moment we are not going to be offering you a contract so, if you can get one somewhere else, you can go.’

Turns out the injury meant he couldn’t get one, so he stayed, and was given assurances by Wenger that if he played well in the cup competitions he’d have a chance for the Premier League, and so it’s proved. Although you might ask how much of his recall has been down to his form, and how much of it is because our midfield is a troublesome area in which we struggle to maintain balance and control, and thus we’ve been trying all kinds of combinations to varying degrees of success.

Still, it puts into sharp focus this current situation we have with his contract right now, which expires in a little over three months. We all know what’s going on. Arsenal have offered him something that he doesn’t seem willing to sign. He has every right to consider the deal unacceptable, and I wrote some days ago about why that might be.

Nevertheless, as Arsene Wenger tells us he wants to keep Wilshere and hopes he’ll commit, it’s impossible to listen to that without the subtext of it being on the club’s terms. They appear to have drawn a line in the sand when it comes to the financial offer they’re willing to make, and unless something changes it’s as likely to be unacceptable to the player in the future as it is now.

Which leads you to just one outcome: Jack Wilshere leaving the club on a Bosman in the summer. My suspicion – and it is only that – is that the relationship between player and manager is not what it used to be. I think when Wenger opened the door for Wilshere to go on loan he took his decision to leave for Bournemouth as one which said he wasn’t willing to stay and fight for a place at Arsenal.

Regardless of how it was dressed up about getting fit again, he’d have got plenty of playing time with us if he’d stayed, and I don’t think things have been the between them same since. Even this season, when he has been fit for almost the entire season, it hasn’t been enough to convince manager or club to offer him even the slightest increase on his wages to tempt him to stay, and that says plenty.

So, unless something big happens between now and June, and the situation alters, we’ll be down at least one midfield player this summer. With question marks over Aaron Ramsey’s future – and it looks like his agent is starting to feed stories linking him with other clubs – on top of the significant need we already have to rebuild in this area, it looks like we might end up tearing down midfield like we did with the attack in January.

Out went 60% of our goals from the previous season in the shape of Alexis Sanchez, Theo Walcott and Olivier Giroud, and in came Pierre-Emerick Aubameyang and Henrikh Mkhitaryan. If we lose Wilshere and potentially Ramsey, it leaves us with Granit Xhaka and Mohamed Elneny as established central midfielders, and it means there’s a lot to be done in the transfer market to get us up to scratch.

With a World Cup, a shortened transfer window as new rules come into play, and the overriding issue of the manager’s situation, we’d better hope that the people behind the scenes – Sven and Raul – are on the ball this summer, because there could be a hell of a lot to do.

Right, that’s your lot, have a good Interlull Thursday.