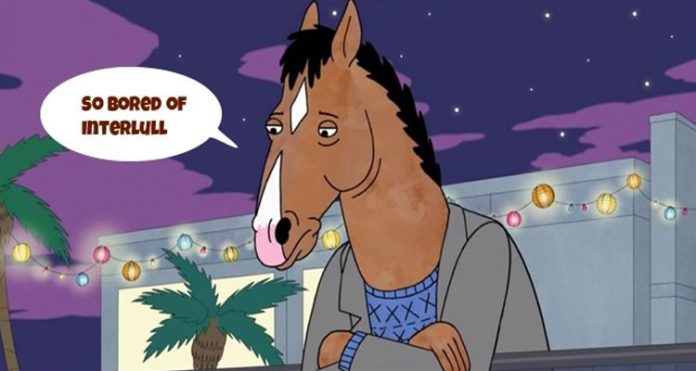 An open letter to the Interlull.

“Dear Interlull, it is not often I take such great pleasure in the demise of something but now that you’re over I must express my immense happiness that you are no more.

You have been tedious and boring, like one of those books by one of those writers who everyone says has a wonderful way with words and such eloquent prose but what they have in flowery language they lack in storytelling and are often stuck up their own arses, what with their satchels and fountain pens and that.

You have been mind-numbingly dull, like an album by one of those guys who when you were younger would always bring out his guitar at a party and people would think he was all cool and sensitive but in reality he would go on to write songs so dreary their only real use should be to torture people at Guantanamo Bay (which is not to condone torture or anything like it but I’m simply stating a fact).

You have been prosaic and mundane and, dare I say it, lacking in integrity. Last night we had a VAR frenzy where VAR did its thing and some people said ‘Oooh VAR is great’ and other people said ‘Oooh VAR is a big load of shit’ and if that in itself doesn’t tell you that VAR is just going to be another thing for people to argue about rather than something that will provide clarity and precision with decision making then nothing will.

You have been lifeless, soulless, bland, banal, plodding and pedestrian, in many ways a lot like the football played by Arsenal at times this season, but dammit I’m in this thing and I choose to sit down and watch that and I don’t choose to have an Interlull foisted upon me. Well, I suppose I do because in choosing to watch football I also tacitly accept the various components of a season, of which the international games that cause these lulls are a part, but that’s beside the point because it doesn’t suit me for the purposes of this piece.

You have been many things, none of them good, much like … nah, do not feed the trolls, as they say, and that would be a delicious plate of sustenance so I won’t go there, but suffice to say I am glad to see the back of you as you totter off into the distance. Please do not take care crossing the roads; consider relaxing in a nice bath with a two-bar electric fire perched on the side of the tub; and do not, under any circumstances, mind the gap because that’s just a thing that they say and the gap is not to be feared. Embrace the gap, I say, narrow the gap, and do so wearing plimsolls with no grips.

ps – Nobody likes you and you smell.”

So, that’s it. The Interlull is done and dusted, and we can now start to concentrate on what’s left of this season. As we all know, the Premier League is not where its at, but it doesn’t mean there aren’t things and points to fight for. This Sunday, for example, sees us play Stoke and if we can contribute in some small way to their potential relegation then I will be quite happy about that.

Is it small and petty and an indicator that our season has fallen well below the standards we expect and hope for? Absolutely. Does it make me any less inclined to want us to win the game and send them down? No, no it does not.

One of the great things about being a football fan is how we can all re-calibrate our minds to take into account the circumstances we find ourselves in. When you’re 33 points behind the league leaders it’s fair to say your season has been less than successful, but what can you do? Do you just stop watching? I guess some people do, and that’s their choice, but it’s not for me so I need to find some other way to derive pleasure from our games.

It’s not exactly what I had in mind back in August, I’ll admit that, but it is what it is and I’ll take what I can get at this point. To a starving man some scraps from a plate are perfectly acceptable nourishment, even if he would have preferred the Filet Mignon washed down with a lovely bottle of Chateau de NotPlayingLikeTwats in the first place.

Then, of course, we have the Europa League, on which all that remains of this season rests. A competition scorned by many before we entered, but one which now provides the chance of silverware and entry into next season’s Champions League. The stick is long, but the carrot is enticing. We need that carrot. Carrot me up, Arsenal.

We’ll have more on that in the days, and hopefully weeks, ahead, but for now I’ll leave you with some interesting reading from Tim (@7amkickoff) on Arseblog News, as he looks at our tackle. Literally. From a football point of view.

And if you have nothing else to do today, James and I played FIFA 18 against each other last night as we promised to do on the podcast for such a long time. A full replay can be found here  – and I think it’s fair to say from the comments we received that people had never before seen such a high-quality, online gaming experience. We’re just waiting for the endorsements to roll in this morning.

Right, have a good one, more from me tomorrow.