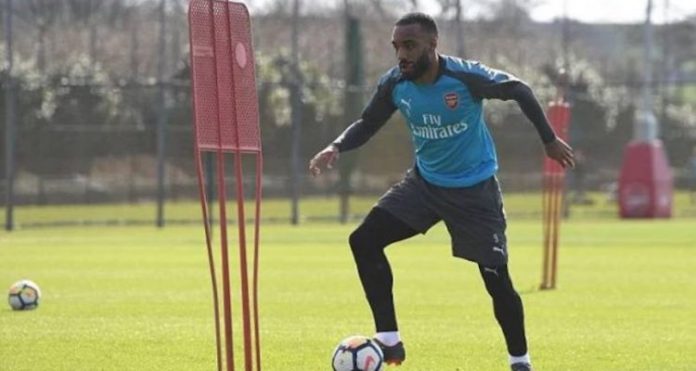 Arsene Wenger’s voice is still lost. If anyone finds it, return to Arsenal, London, The World, as soon as possible. In the meantime though, we’ve still got Steve Bould who appears to be much more comfortable sitting down with the in-house media chaps than with the ‘external’ press.

He spoke yesterday about training being ‘lively’ this week, which is something you’d expect after a couple of weeks without it. Regardless of those who were away, the players have come back and can now focus on the final few weeks of the season. Let’s hope their liveliness translates into performances when we start playing games again.

While some would write off the Premier League as the games mean so little to our potential final position, the assistant manager was having none of that, saying:

It’s important that we concentrate on league games, people keep talking about the Europa League, but we need some wins in the Premier League. That’s where out focus is at our present time. I don’t think there’s any fatigue. Fatigue is when you’ve not got anything to strive for.

We’ve still got an awful lot to do and I think there’s a bit of excitement actually.

He then turned his attention to Alexandre Lacazette who has just come back from knee surgery and whose first season in England hasn’t been entirely convincing. The fact he’s our top scorer with just 9 is much more a reflection of the team’s inconsistency than it is of him, and Bould had answers for that:

I think the physical element has surprised him a bit and caught up with him, which it does with many players who come from abroad. Like I said I think the last month may have helped him, I know he’s been working in the gym. We’re hoping he comes back sharp.

The arrival of Pierre-Emerick Aubameyang sparked stories about how Lacazette was a flop, I don’t believe that to be the case by the way, and Bould touched on qualities he didn’t realise he had:

Having struggled to score with a back three and a back four, perhaps these final games of the season could be a chance for Wenger to experiment a bit more. Why not play two strikers? I know there’s a reliance on Lacazette for Europe, but it’s something I’d be quite interested to see, not least because it would be different. How much more evidence do we need that the systems we’ve used this season are a significant contributor to our lack of consistency?

Tim wrote a bit about it in his column a few weeks back, and at this point I’d be well up for it. It’s something we could also use in Europe too, swapping out Aubameyang for Danny Welbeck because of UEFA’s stupid rules, and the fact it would make us far less predictable might well be a bonus as we head towards the final in Lyon in May.

Meanwhile, Bould’s comments on Jack Wilshere probably tell you exactly why we’ve offered him the kind of deal we have – one which is incentivised by availability and fitness. He spoke about his injury problems, and said:

It is something he might have to manage all his career I guess. He has been training fully with us over the last month – two or three months even. It gets tempered a little bit occasionally. That’s the nature of Jack I’m afraid. He can pick up an injury because his ankle will turn, his knee will… he’s got a sore knee.

It’s hard not to think so much of what he goes through comes from that one bad ankle. The body tries to compensate and it causes knock-on problems elsewhere. So if he’s being nursed through training now, at 26, carrying a weak ankle and a sore knee, where does that leave him in two years time? Or three years time? You can understand the club’s position, I guess.

Footballers carrying injuries is not a new thing, Wilshere is hardly unique in that regard either. Irish great Paul McGrath could barely train during the week but at weekends and in games he delivered. The question is can Jack deliver to that extent, or to the point where it wouldn’t be better for Arsenal to say ‘We need someone who can play three times a week’, without the constant worry of whether or not a kick or a slip or a twist or blocking a shot is going to put him out of action for weeks or months.

It’s a complicated one, emotive too because of his connection to Arsenal going back so many years, yet the Guardian report this morning the club are ‘sanguine’ about the prospect of him turning down the take it or leave it offer that’s on the table and which doesn’t not look like it’s going to be improved on at this stage. Whatever happens, with just a few weeks left this season, we don’t have too long to wait to see.

Finally for today, a sneak preview of what’s coming up next week for Arseblog Members on Patreon:

And for that the day that’s in it, as we remember the great David Rocastle, you could do a lot worse than spend an hour watching the brilliant Rocky and Wrighty documentary (hat tip Ricky).

That’s it from me, have a great Saturday, back tomorrow to preview the game against Stoke and the return of football, hurrah!