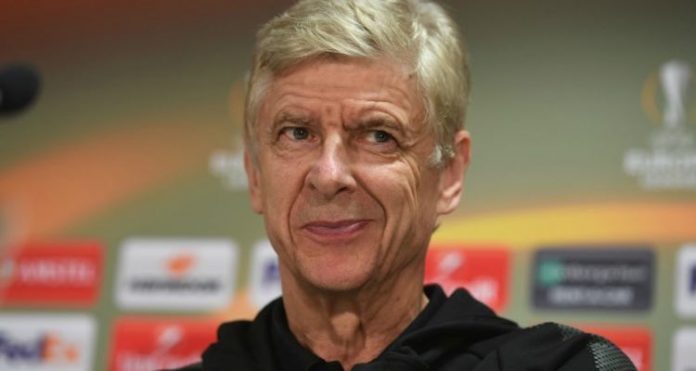 Welcome to Monday. It’s a new week at the end of which we’ll have an Arsenal match so that’s something, but in the meantime we’re still feeding off scraps.

Yesterday all the talk was of Thomas Tuchel with kicker reporting he’d be taking over at Arsenal after Arsene Wenger, but just as everyone was having a great old time with that information, Raphael Honigstein poured cold water over the whole thing with this Tweet:

"Tuchel is definitely not going to Arsenal". You can take this, from Christof Kneer (@SZ_Sport), as gospel. https://t.co/ghBb0nKUzW

So, there you on that one, I guess. Do you do that thing when you look at someone and realise they’re basically a mix of two other people? Tuchel, to me at least, looks like Jamie Vardy crossed with John Malkovich. ‘What is the relevance of this?’, you might ask, and there is none, I just wanted to put that out there.

Anyway, I suppose we’ll just have to add him to the list of people linked with the job who end up somewhere else. Focus on who might be the next boss tends to ignore the fact there’s still a current boss who, from the sound of it, doesn’t sound like someone who is planning to go anywhere, of his own volition at least.

Arsene Wenger once again spoke to beIN Sport, which he now does during every Interlull, providing them with juicy interview snippets. He is much more open in these pieces than he is generally, and in this latest one it was put to him that winning the Europa League this season would provide him with an excellent opportunity to go out on a high.

He was having none of that though, saying:

Overall, the older you get the more it becomes a bit age discrimination. I can accept that if results are not good enough that we are in a job that has consequences, but that perpetual thing about how old are you, how long you’ve been at the club, I find that a bit difficult to take.

But all the rest I accept. I’m in a public job where I have to make results and I am responsible for the results.

And when asked again if it might be a good way to finish his career with the club, he said:

Honestly, I am not too concerned by image because I focus on working with the values I think are important, to give my best for my club. I believe I’m a little bit fed up with all that modern thing that is to completely take care of your image.

In that last one I can see what he means. He’s simply not bothered about what his reputation is because his focus is on winning games for Arsenal, however I don’t think it’s quite as cut and dried as that. There’s no question that right now Wenger is a divisive figure, but I believe that in time he’ll be looked upon by the majority as someone who did fantastic stuff for this football club.

I also think that in some ways the club have a responsibility to ensure that happens with the decisions they make and when they make them. From what he’s saying in that interview, it doesn’t sound like a man who would see Europa League success as a way to ice his Arsenal management cake, which is a bit of a shame really.

I think the dream scenario for him, and for the club, is success this season, a European trophy plus entry into next season’s Champions League, and for the goodbye to be wrapped in glory and achievement. It would fantastic for Arsenal, fantastic for Wenger, and both parties could move on.

And yet Wenger being Wenger, as we all know him at least, would see winning the trophy as validation of his work, and it’s not difficult to understand that point of view as well. ‘What more do you want? I’ve won a trophy, I’ve got us back into the Champions League, what’s the problem?’

The problem, of course, is evident this season in our league position, our patchy form, in the swathes of empty seats at every home game, and the general sense of ennui that envelops the club at this moment in time. Maybe success this season would spark a revival, make us more competitive next year, but we’d hoped that would happen after FA Cup wins and it was not the case.

The club then run the risk of more of the same next season, people staying away despite having bought tickets, and the Arsenal ‘brand’, so to speak, being damaged further. Empty seats are a bad look for any football club at any level, and the Premier League table tells you that the ‘big 6’ is in danger of becoming a ‘big 5’ as we find ourselves more closely aligned with the likes of Burnley and Everton than we are with the teams at the top.

Regardless of what else happens between now and May, that is the reality of our situation. We’re 33 points behind the league leaders, we’re 13 points behind our North London rivals, and that is on Arsene Wenger’s watch. It’s why I believe we need a change, and success in a knock-out competition doesn’t alter that for me.

I want us to win the Europa League, of course, because it would be fantastic to lift a European trophy after so long, but I also want that success to be as much a catalyst for change as the under-performance that has preceded it. It would be the right thing for the club, and I believe the right thing for Arsene Wenger – even if he doesn’t seem to agree at this moment in time.

Anyway, that’s your lot for this morning. James and I will have an Arsecast Extra this morning. If you have any questions or topics for discussion, please send to @gunnerblog and @arseblog with the hashtag #arsecastextra. That’ll be ready before lunchtime.