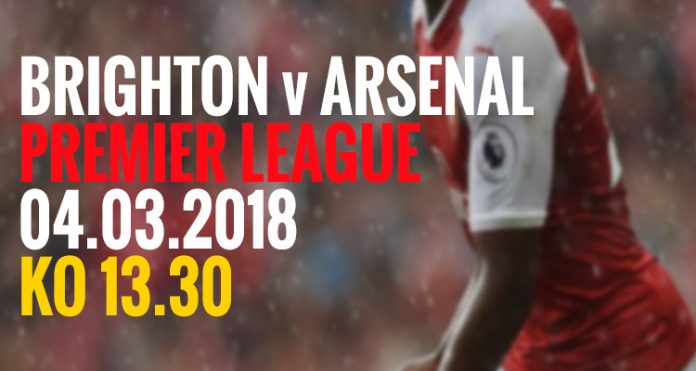 It’s the day of a game. I sit at my computer with coffee. I think about the game, the opposition, the team Arsene Wenger might pick. Usually I have some sense of what we’ll do and how we’ll approach it, but today feels a bit different.

It’s early March and we’re 13 points off the top four. Basically, the rest of our Premier League season is meaningless. What we do today, however we do it, is unlikely to have any significant impact on where we’ll be come May. Perhaps, and I truly hope this isn’t the case, we have to start looking over our shoulder at Burnley who are just five points behind us, but we seem more or less nailed on for 6th unless this current slump gets even slumpier.

That’s an unpleasant consideration on a Sunday morning when you’ve got a bit of the *boilk* going on, but that’s where we are. I suppose you look at this game as a way of steadying the ship ahead of a Europa League clash with AC Milan, but such is our situation you can imagine Brighton will be fancying their chances of getting something from today’s game.

We’ve played fourteen games away from home this season and won just three times. We’ve lost seven of those games, and our goal difference is -7. We’re bad on the road, there’s no other way to say it, and if you were Brighton, having seen us lose to Nottingham Forest, Swansea, Bournemouth and Östersunds FK in 2018 alone, why wouldn’t you have a go?

Arsenal could surprise everyone and turn up, play well and win the game. There’s no question that we’ve got the players capable of doing that. Despite the malaise that exists at the moment, it’s easy to forget that on paper we have a good squad. The problem is that on paper isn’t translating to on pitch.

Does Arsene Wenger change things today? How much can he change? What he can do with the players at his disposal to shake things up? A new formation? Promote some youth into the team? Drop some under-performing first team choices? We are not blessed with a lot of options unfortunately, but I suspect we might see a bit of a shuffle just because something’s got to be different from the selection that failed so badly against Man City twice in a week.

Arsene Wenger’s plan is to not get weighed down by what happened in the last week, saying of the most recent encounter:

The game was not all negatives – there were a lot of positives in that game. The size of the score, it’s always tempting to think it was all rubbish, which was not the case. You have to take perspective, sit back, look at the whole picture and analyse really where we were poor and where we were strong, and insist on the strong points and get rid of the weak points that we have shown.

I mean, the positive I took from the 3-0 defeat on Thursday was that we were not as shit as we were in the previous 3-0 defeat, so in that sense I guess it’s true. Were there a lot of positives though? I’m trying to think of them and the only one I can come up with is that it could have been worse if City hadn’t taken their foot off the gas so completely in the second half.

I get that Arsene is trying, publicly at least, to ensure his team’s confidence isn’t more badly shaken than it already is, but it’s hard to read the manager say – after a second successive 3-0 loss – that there were positives we should focus on. I don’t know if he believes that at all. There’s a big part of me that hopes he doesn’t and is just saying this because he kind of has to say it, but there’s also another part of me that thinks/worries that he actually does and that makes my head hurt.

In truth I have no idea what we’re going to get today. It could be anywhere from brilliant to catastrophic. That’s who we are these days, and there’s no getting away from it. Obviously I’d like it to be much more the former than the latter, life is better when Arsenal win football matches, so I hope they can make that happen today. It’s just impossible to provide any analysis beyond that.

As ever we’ll have a live blog for you, and all the pre and post-match stuff on Arseblog News. Fingers crossed, and catch you later for the game.

Plenty to choose from up front, but midfield and defensive worries abound for Brighton trip