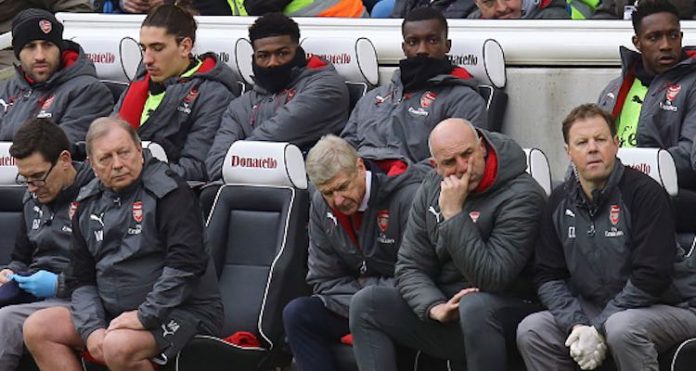 Arsenal’s eighth defeat of 2018 was also our eighth defeat away from home in the league this season, so there’s an almost pleasing kind of symmetry to the numbers, but there’s nothing pleasing at all about seeing what’s happening at the club right now.

The steady and inexorable decline continued as two first half goals illustrated the problems we have, and despite being lucky to be only two behind, we couldn’t muster up more than Pierre-Emerick Aubameyang’s strike just before half-time which gave the scoreline a measure of respectability at that point.

We huffed and puffed our way through the second period without causing them any real problems, and if they’d had a bit more composure and a striker with even a bit of pace it could have been much worse for us.

The main damage was done in the first half with Petr Cech culpable on both goals. For the first he came to take a corner, didn’t get there, and when the ball was headed back across goal Lewis Dunk was there to take the biscuit and put his side ahead. I know we can’t look too far beyond the keeper’s mistake, but the ease with which Brighton won headers in our box all day spoke to a team that simply wasn’t able, or properly willing, to compete defensively.

That was illustrated in the second goal. Laurent Koscielny gave the ball away, didn’t close down as well as he could have, and a long cross from the right completely bamboozled Mustafi who let it sail over his head, allowing Glenn Murray to double the lead. Again, Cech should have done better, but it was hapless all round.

The 35 year old came out afterwards to apologise:

If you want to win a game away of home in the best league in the world your GK can’t concede 2 goals like I did today … it’s simply not possible … The team fought back but the damage was done .

Which is fair enough, but he shouldn’t feel as if this was simply down to him. I like the fact that at least he’s willing to take responsibility for it, which is something that’s in short supply at Arsenal these days. As an aside though, how is that when a keeper leaves us they seem to become better players, and when they join us they tend to get worse? I wonder what that could be about.

Granit Xhaka set up Aubameyang to poke home from close range, and Brighton had a bit of luck themselves when the ball rebounded back off their post just before the break. It could have been 2-2, it might have been a different game in the second period if that was the case, but it wasn’t so there’s not much point thinking about it.

I was hoping for more in the second half but in reality we played like we have for some time now, without any real confidence, without pace or incision, and what got the away fans singing the name of one of our players was when Jack Wilshere got a well deserved yellow card for a bad foul. That tells its own story.

I think Sead Kolasinac was lucky to stay on after a clash with Ezequiel Schelotto left the Brighton man in a heap on the ground. Already on a yellow card, the Bosnian got away with what I thought was an offence worthy of a second. My marker for this is what would I think if an Arsenal player had been on the other end of the challenge, and I’d have wanted a card. I don’t think he set out to hurt him, just be stronger than him, but he hit the man shoulder first in the face and I don’t think we could have any complaints had he seen red.

Not that it mattered though. Brighton looked more likely to score again than Arsenal did to grabbing an equaliser. The introduction of Danny Welbeck did little, and sending on Hector Bellerin and Eddie Nketiah with 83 minutes on the clock just felt like an afterthought, a reaction perhaps to not making any changes against Man City.

The final whistle went, and I confess that I’m now almost inured to defeat. I hate it when we lose, but there was such a sense of inevitability about it that it’s difficult for it to have the kind of impact it used to. It felt matter of fact, and that’s a terrible thing, because when you’re a team like Arsenal and you lose to a team like Brighton – with the greatest of respect – it should be something of a shock, at least. They fully deserved it though, and that’s the point I’m trying to make.

Afterwards, Arsene Wenger blamed all kinds of things. He said the team was low of confidence, and that’s obviously true, but then claimed the timing of the Carabao Cup final was problematic because when you lose it, it creates ‘negative waves’. Then there was the schedule, saying it’s almost impossible for players to play Sunday to Thursday to Sunday etc, but that doesn’t wash.

Firstly, it’s his job to make sure you have a squad which can cope with it, but secondly there’s no difference between Wednesday to Saturday and Thursday to Sunday. I get that there are Champions League weeks when it’s Tuesday to Saturday, but even that is offset by the fact that for the majority of our European campaign the manager has been playing a fringe selection while his so-called ‘first team’ sit those games out. We can’t start crying about fatigue now.

He was also asked if he feels he’s the man to turn things around, and in that sense he answered in the way you probably would expect him to:

Yes, because I have done it before and it’s the first time I lose so many games on the trot in my life. I believe in our quality. Until now, I always managed to do that and I still believe that I can do it.

At the moment my future is not my main worry. My worry is to get Arsenal to win football games, and then we see where we go from there.

I’ve seen people suggest that if he really cared, or he wanted what was best for the club, he’d call it quits and walk away, but that’s not how it works. Managers don’t operate like that, and Arsene Wenger is not unique in that regard. They almost always think they can win the next game, then go on a bit of a run and make things better again.

Managers rarely resign, they’re almost always sacked, and I don’t see why anyone would expect anything different from Wenger. It’s that belief in their own ability, that self-confidence, perhaps even arrogance, that makes them top level managers in the first place, and while he can’t be blind to what’s happening, he’ll also back himself to put it right.

That’s why it’s pointless getting angry at him for not walking away, and anger should be directed a ‘board’ and a majority shareholder who are letting this gaping wound fester. Not a single Arsenal board member represented the club at Brighton yesterday. Did Ivan Gazidis have something better to do than, you know, his actual job? Tell you what, I’d hate to play hide and seek with that guy because he clearly has powers of invisibility. Like some kind of master spy he’s seen only when he wants to be seen.

Ultimately though, what passes for a board at this club is handcuffed by the fact that only one man makes the decisions, and Stan Kroenke is allowing this decline to continue, to worsen, and to damage so many aspects of this club right now. In the passing of time, after the dust has settled, Arsene Wenger will rightly be remembered as a great man who did brilliant things for Arsenal.

There will be no such kindness towards Kroenke though as he will be seen as someone who presided over an era which has seen fans grow apathetic to the point where they simply don’t turn up for games when they’ve already bought tickets (and let’s not use the slightly inclement weather of last week as any kind of excuse – it’s been going on much longer than that).

He’s watching a team slide down the league table, with just four wins from its last fifteen games, with players who don’t look like they know what do, managed by a man who cannot make it better regardless of how he works and who, I believe, looks absolutely beaten down by it all. The pictures of him on the bench, head in hands or staring at the ground, are not pleasant to see. I know they make some people angry, they just make me feel sad.

And when you’re the majority shareholder, you have a responsibility to do what’s best for Arsenal. Leave aside your personal feelings for Arsene, and make the decision that everybody knows needs to be made. Dress it up as a mutual one, if you like, and I hope that’s the case if and when it comes, but if he continues to do nothing and things continue the way they have been on the pitch, there’s a risk of exacerbating an already toxic situation.

33 points off the leaders, 13 points off the top four, and looking over our shoulders at Burnley. That’s where we are. That is our reality. Arsenal is damaged institution and unless Stan Kroenke does something it’s going to get worse.

James and I will have an Arsecast Extra for you this morning. If you have questions or topics for discussion, please send to @gunnerblog and @arseblog on Twitter and we should have that available for you before lunchtime.