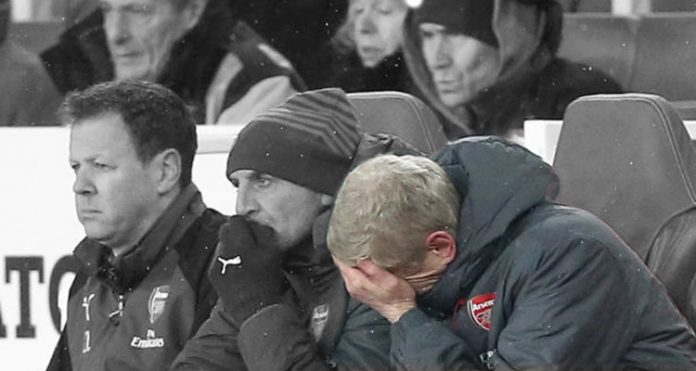 After what happened at Wembley on Sunday, and bearing in mind the league table which showed them 27 points ahead of us, I don’t think anyone needed any further evidence of the gulf in quality between Arsenal and Man City, but just to make sure last night gave us exactly that.

It wasn’t even so much in the first half where we chased shadows and ended up going in 3-0 down, but in the second. Such was the ease with which they controlled the game, they took their foot off the gas and allowed us to have a bit of possession, confident that we wouldn’t hurt them or, if we did, they could always step it up and make the game comfortable again.

It felt like a kindness, and this morning that’s what gets me more far more than their superior footballing ability. It was that they came to our stadium, blew us away in the first half with some fantastic stuff – helped to a large extent by the fact we remain defensively hapless – and then decided, whether it was under Pep’s instruction or not, that they had no need to turn the screw and waste any more energy than necessary.

Perhaps Pierre-Emerick Aubameyang’s penalty might have changed the game, got us back in it for a bit, but I think it would simply have seen them hit the accelerator, and go at us like they did in the first period when we just couldn’t live with them. Instead his weak effort was saved and in some ways it summed up what was another toothless night for a team that is well and truly in the doldrums.

The goals: well, you have to give them credit for some superb football but I don’t think we made it particularly difficult for them. Leroy Sane waltzed through our midfield for the first, and Bernardo Silva’s finish was aided and abetted by Sead Kolasinac allowing him inside and onto his favourite foot. Kinda like how we always seem to let Arjen Robben do it.

For the second Mustafi got done twice by Sane, but then the interplay between Aguero and David Silva was outstanding and the midfielder scored his second goal in four days against us. As for the third, it was impressive again from City who kept the ball and broke through Arsenal’s press, but it was one of those moves which could have been stopped by a foul on halfway, but that’s not the kind of team we are and those aren’t really the players we have.

In truth though, had they not worked it to Sane to score, they’d probably have found another way through because they’re that good and, unfortunately, we’re that bad. Willingness to praise City for their quality shouldn’t provide a shield our deficiencies and to see us struggle the way we are at this moment in time really is tough to watch.

I think James summed it up very well in his post-match Tweet:

If you asked me to imagine the saddest possible expression of Arsene's demise, I probably would have said a half-empty stadium bearing witness to his lifeless team being battered by a side playing the kind of football he was once renowned for.

There was much discussion about how, throughout the second half, the manager simply sat there, with Steve Bould alongside him looking as if he’d like to get some of the players and throw them out a window but knowing he’s not allowed, without changing a single thing. The whole 90 without a substitute.

Was it a case that he simply didn’t know what to do? More likely he looked at his bench, and looked at the Man City side, and he knew that there was nothing he could do to change it. Was it worth introducing another ‘villain’ to the pantomime that is Arsenal at the moment? Sunday might tell us, as we have another game to contend with, but my suspicion is he knew it was pointless to even try, and that tells its own sad story.

I realise, after many years of writing this blog, that people will have different reactions to what they saw last night. Arsenal supporters will have been the full gamut in terms of emotional responses to it, from anger to disenchantment to indifference, and that’s normal and fine. There’s no right way or wrong way to feel about it and I can only tell you what it did to me.

I watched Arsene Wenger sitting on that bench, in a stadium that was built to take us to a new level and realised that we are at a new level. But instead of it being the ultra-competitive one we’d all hoped for, we’re now an also-ran in the Premier League, and it made me feel sad and a bit angry at how this has been allowed to happen.

We moved in there in 2006 and while things were changing in the football landscape, with the emergence of billionaire, sugar-daddy owners, the Arsenal of back then was a club with huge ambition. You don’t embark on the kind of project we did and leave behind your beautiful, historical home on a whim.

It took so much work to make it happen, and Wenger was one of the driving forces behind it. While nobody could really foreseen the way the ownership model would shift so radically, he knew that for us to be truly competitive at the highest level of European football we had to get bigger, we had to modernise, and that’s exactly what we did.

Within a few years of that move most of the people who made it happen at executive level were gone. The majority shareholder the chief executive arrived at a swish, swanky new stadium with no real understanding of what it took to get there, and also why we got there. Champions League football was taken for granted because that’s what Arsene always delivered. There were ways to justify what now appears a very obvious slow decline. Chelsea’s money, City’s money, United’s long-standing power, as well as our restricted financial situation.

But in reality the people who were supposed to be running the club, and I don’t mean the manager, were happy to exist in this comfort zone. Kroenke saw his investment increase in value year on year; Gazidis got a nice healthy bonus every year regardless of what we did on the pitch; and Arsene kept control over the footballing side of things, until recently when even these absolute shitheads at board level realised something had to give.

The appointment of a Head of Recruitment and ‘Definitely not a Director of Football’ are welcome, but they come years too late. If we’re going to judge Arsene Wenger for his work – and we absolutely should – then let’s not be blinded to the fact that other people are culpable too. People who have hidden behind the manager and let him take all the bullets during difficult times.

I haven’t forgotten that, nor should anyone else as we see them try to re-position themselves as the potential saviours and men to make the decisions about what’s best for the future of this club we support. I’ve seen what you did, and didn’t do, and your leaked photos and internal power-plays don’t mask that.

And so, as I saw Arsene sit on the bench I thought that this must have been so far from the vision he had when the Emirates was built. He can’t possibly be blind to this, and ultimately he’s the manager, he’s spent the money since the shackles came off, and the decline has continued. That’s on him.

This is a huge club with massive potential and we’re under-performing in such a big way. The need for something different is obvious, and it feels like those above are abdicating their responsibilities again, content to let Wenger remain in the firing line as long as possible, afraid to stick their heads above the parapet lest they be held accountable in any way. Anyone heard anything from any of them? No, of course not.

I don’t take any pleasure in seeing a once brilliant manager like this. He looks a broken man and it’s not nice to see. I find it hard to see him struggle on the pitch and off the pitch, but I while I won’t absolve him of his responsibilities when it comes to our current situation, he’s not the only one at whom fingers should be pointed because there are people who can do something about it, and don’t.

Because of Thursday night football, the Arsecast schedule is a bit all over the place, but I’ll have a podcast for you before lunchtime. Until then.