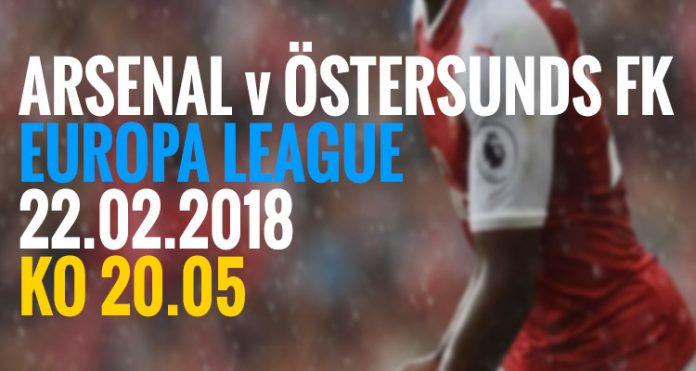 It’s Östersunds FK in the Europa League tonight, with Arsenal holding a strong position with a 3-0 lead from the first leg.

Arsene Wenger is clearly going to rotate his squad this evening as he has done for most of the European campaign so far. As ever, he talked about picking a team that he thinks can win the game rather than saying explicitly his selection would be strongly influenced by the Carabao Cup final on Sunday, but I think we’ll see a very different team tonight from the one that runs out at Wembley.

All the same, he’s urging his players to stay focused, and not take anything for granted:

If you look at the results of Ostersunds in the Europa League, it’s quite impressive, home and away. That game for us demands respect. It would be absolutely stupid for us to think we go out there and have a stroll – we could have a bad surprise.

They showed flashes of danger in the first game, and you wonder if they’d scored that penalty if tonight’s game might just be a little more on edge, but at home with a three goal lead against a team still in its pre-season phase the expectation is that this should be routine for Arsenal.

Henrikh Mkhitaryan will play because he’s cup-tied for Sunday, but there’s no Mesut Ozil who has been sick this week. Someone needs to get him on a course of multi-vitamins because he picks up colds like Sergio Ramos picks up red cards, but in reality he was never going to play tonight anyway, so it’s hardly a big deal – unless he doesn’t recover in time for Sunday of course. Which I think he will.

The absences of Alexandre Lacazette, who is recovering from surgery, and Pierre-Emerick Aubameyang because he’s ineligible, mean that Danny Welbeck will start up front again, and although he had a fairly indifferent performance in Sweden, Arsene Wenger is hoping that he’ll have gained some confidence by coming through without any injury problems on a pitch which can, at least in the minds of players, be a contributory factor.

The manager touched on Welbeck’s injury issues and the impact they’ve had on the England international over the last couple of seasons:

One of the advantages of being young is that you feel undestroyable. It gives you an arrogance. But as soon as your arrogance is hit, you are lost. Sometimes the players are very confident, very arrogant but as soon as they lose that belief in their body, suddenly you are lost and you don’t know any more what is going on.

I believe he has gone through a torrid time but he has come out well. I see signs in training now that are positive.

The increased short-termism in opinion means that there’s often summary judgement passed on a player without taking into account his circumstances. Like many, I think Welbeck could be a player on the move this summer because it hasn’t really worked for him here, but I also think it’s impossible to ignore the way the injuries have affected his career.

He’s had two really serious knee problems. The first, sustained in April 2015, left Arsenal and the medical team perplexed, but eventually required surgery which saw him sidelined until February 2016. He worked his way back to fitness, but during a 2-2 draw with Man City in May he damaged his meniscus and required surgery again to correct ‘significant cartilage damage’.

He didn’t play again until January 2017, and since then, despite some goals (Leicester at home! – although that was after the first injury) and glimpses of his power and pace, he’s found it hard going in general and has been beset by a string of minor injury problems. Even with the departures of Theo Walcott and Olivier Giroud, the arrivals of Lacazette and now Aubameyang have left him further down the pecking order when it comes to playing up front when everyone’s available, but football is strange in the way it opens doors for players and tonight is another chance for him to, hopefully, regain some confidence.

Between now and the end of the season it’d be great to see him rediscover some form because he is a player with qualities that can be very useful – even if he’s deployed in wide positions. I think it’s fair to say it’s not been a period of his career that he’ll look back on with total happiness, but he did start the FA Cup final and was really effective that day during a fantastic team performance.

With just 12 months of his deal left come the summer though, there’s a decision to be made from both sides of the fence. For Arsenal it’s about whether they can justify a deal for a player who will be essentially third choice striker and a utility player in wide positions, and for Welbeck it’s about what he wants to do with the ‘peak’ years of his career. He might feel playing regularly elsewhere is better for him than being a squad player at Arsenal.

Between now and then however, I hope he stays fit, and with the Europa League growing in importance, he could yet make his mark in a significant way. Fingers crossed for him because he always comes across like one of the good guys, and it’d be fitting if things went his way for a bit after all the troubles he’s had.

Right, that’s your lot for this morning. We will have a live blog later on so join us for that, and all the pre/post-game stuff over on Arseblog News. Till tomorrow.