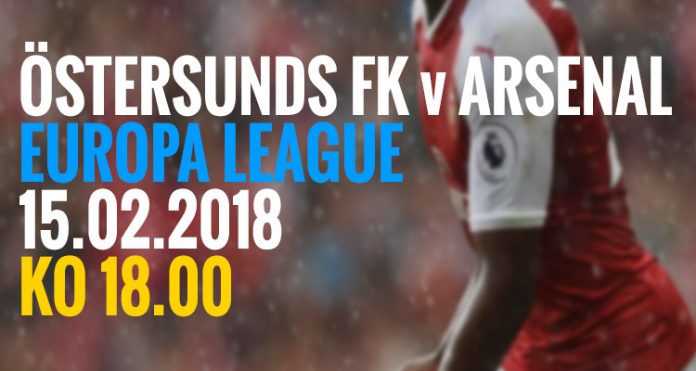 It’s Europa League action tonight as Arsenal take on Östersunds FK away from home on an artificial pitch in sub-zero temperatures without a host of first team players. What could possibly go wrong?!

This competition is our bread and butter now, and tonight’s game is very much a trip into the unknown. By now I’m sure you’ve read all about the opposition and the great job done by their English coach (see here if not), but it’s probably a reflection of where we are right now that nobody is taking this one for granted.

In terms of team news, we’re without Alexandre Lacazette who had surgery this week; Pierre-Emerick Aubameyang, cup-tied because of UEFA rules which make ‘no sense‘; Aaron Ramsey because of his groin problem; and others as Arsene Wenger explains:

One or two had recent problems. Koscielny with his Achilles, Wilshere as well. I don’t know what the pitch is about. I wanted to rest Jack because he was sick several times in the game against Spurs and felt he hadn’t fully recovered.

It seems as if Per Mertesacker is out too, as the manager admitted he’d yet to decide who will captain the side this evening, an issue he wouldn’t have to contemplate if the BFG had made the trip. You suspect, as the senior man at the back, it’ll be Nacho Monreal, but that’s very much a side issue really.

Mesut Ozil has made the journey and will play, you would assume with Henrikh Mkhitaryan, while up front it’s a chance for Danny Welbeck to play in his favourite position and in the position Arsene Wenger says he prefers him in. Speaking about deploying him as a striker, he said:

It’s where I prefer him personally and it is where I believe that he has an opportunity to do well. He had to wait a little bit to get back in the team but that gave him time to work on his fitness and from what I have seen today he is sharper than for a long time. He looks very sharp.

Genuinely, I can’t remember the last time Welbeck started a game up top for us – was it Liverpool away earlier in the season? There may have been others but I just can’t recall, and this season, much like his Arsenal career to date, has been one disrupted by injury. A few weeks ago his chances of starting this game up front would have been slim, but football is funny and here he is with an opportunity and no small amount of responsibility.

Since he joined in 2014 we’ve seen glimpses of the player he might be, that Champions League hat-trick for example was a night when everything went right for him, that goal against Leicester etc, but those occasions have been so few and far between. We shouldn’t overlook the impact two serious injuries have had on him and his ability to play regularly, but it’s also hard to be convinced by him when you see him play.

He does have five goals to his name this season, but that’s from 25 appearances, and with only youngster Eddie Nketiah on the bench as back-up, there’s an onus on Welbeck to produce tonight. He seems like a good guy, and it’d be nice to see him to take his chance, so let’s see how it plays out.

The conditions and the pitch are going to make this a bit more challenging, but Wenger is calling on his team to deal with that:

Our technical level should help us to adapt quickly. The temperature at the moment I don’t find a big difference with London. We have cold wind as well similar to what has happened here so I don’t think the temperature will be a big problem.

Our target will be to adapt quickly to the pitch.

It may well be an advantage for the home side, but if you ask me which kind of pitch is more difficult – a bobbly, rain-soaked mud-heap, or a state of the art 4G artificial surface – and it’d be the former every time. We should be good enough to cope with that side of things, and tonight we’re facing a side who didn’t even exist when Arsene Wenger took over as Arsenal manager.

The Swedish league hasn’t even started yet, so Östersund are almost in pre-season mode. I know we’re away and our form on the road has been patchy at best; I know it might be a bit chilly and the pitch isn’t precisely what we’re used to; but anything other than a win tonight would be a big shock. They’re very much the underdogs with nothing to lose, which can be liberating, but there ought to be enough quality in this Arsenal side to deal with all the various elements of tonight’s Europa League cocktail.

For some extra reading this morning, here’s Tim Stillman’s column on our European season so far, and remember that we’ll have a live blog for you later too. The game kicks off at 6pm, so in many parts of the world people will be in work etc, so you can follow the action with us. Bookmark our live blog page now.

Catch you later on for what should be an interesting game of football. Until then.