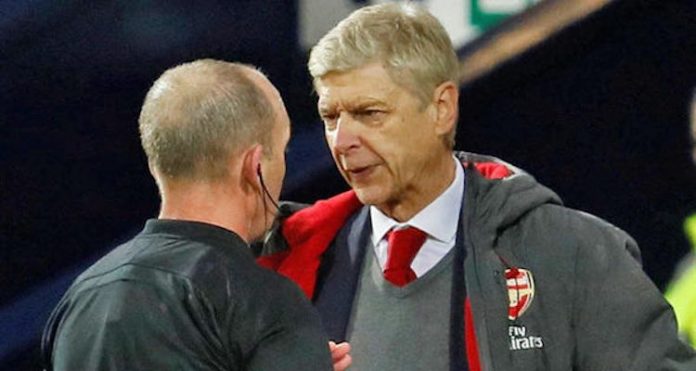 Hello and good morning. I played 5-a-side for the first time in about two months last night, and this morning it’s fair to say I’m aching a bit. Don’t worry though, it’s just my limbs, torso, back, skin, and organs – everything else seems to be fine.

Let’s start this morning with Arsene Wenger’s three match touchline ban. Earlier this week, the manager said that was ‘100%’ going to contest the FA charges leveled at him following his remarks to celebrity referee Mike Dean. Even in his press conference yesterday, he said:

I’m 21 years in the game and what I’ve seen and heard in the corridors from people, you can understand why I’m surprised and shocked by having been charged.

Not shocked and surprised enough though, as yesterday he, according to an FA statement, “admitted that his language and behaviour in the match officials’ changing room after the West Bromwich Albion game on Sunday was abusive, improper and questioned the integrity of the match referee.”

Perhaps some kind of plea bargain went down, as when you look at the games he’ll miss – Forest in the cup on Sunday, the first leg of the Chelsea semi-final in the Carabao Cup, and Bournemouth away – it could have been worse. Or better, depending on your perspective, but from his point of view they’re hardly the most intense fixtures of the season.

I don’t even know that it makes that much difference in the grand scheme of things. Wenger is not really a touchline prowler, leaping around in his technical area like some managers, and I’m pretty sure he can remain in contact with the bench via fax, telex, and walkie-talkie. Steve Bould can issue the instructions from the sideline via the mediums of mime and interpretative dance to save him having to say anything, and everything should be hunky-dory.

Interestingly, I went back to a blog from last season around the time when Wenger had been issued with the same charge for comments he made to Anthony Taylor – comments still worth a read today in fairness – and there was some stuff about how Mike Dean had had five of his previous six red cards overturned, and when he was ‘demoted’ the Championship he awarded a penalty for a handball that was miles outside the box.

Conclusion from that blog: But just you watch, quicker than you can imagine, he’ll be back in the Premier League given a top game to do, because there’s just no accountability.

And here we are, another club having endured another Mike Deaning. So while I think of all us can accept Wenger being handed a ban if he has admitted to questioning the integrity of the referee – however valid you think might be – as well as using abusive language, why is the manager the only one accountable for his wrongdoing?

Why is there no serious way of disciplining a referee who has singularly failed to do his job to the required standard, hardly for the first time either? The brouhaha over Wenger’s charges and his questioning of officials throughout the week provided a handy distraction for the PGMOL who remain answerable to nobody but themselves. It’s a ‘Who will police the police?!’ kinda situation, and in this case we know what the answer is.

The conclusion to the blog from last season was this:

By all means punish Arsene Wenger for his behaviour, but as long as they think that’s all they have to deal with, then we’re going to have to endure these kind of things even longer. A hefty ban, a massive fine, making Wenger referee Sunday League, or any of the other suggestions that range from rank stupidity to downright moronic, won’t make the blindest bit of difference until they address the elephant in the room – which is the PGMOL, led by the inept Mike Riley, the way it’s set up and allowed to operate with such impunity and with no accountability to anyone but itself.

12 months down the line has anything changed? Has there been even the slightest acknowledgement from that body that they could make things better or improve? Of course not, because there’s no value in that for them. Wenger made a point during the week that no English referee is going to the World Cup next summer. Not that I care really one way or the other, but it tells you something about how this current crop of officials are perceived by their peers and fellow administrators.

Some will say that the focus on referees is pointless, that we should concentrate on our own flaws, and I get that, but it’s not as if the two things have to be mutually exclusive. You can acknowledge the weaknesses and problems we have as a team, and still believe that refereeing can get better.

They are such a fundamental part of the game, like it or not. They make decisions which influence matches, they can turn a game on a sixpence with a blow of the whistle. Most of the time they’re spot on, sometimes they’re not, and occasionally they’re really, really not, but if you continue to wilfully ignore the incidents when things have been so blatantly wrong and not even try to address them in any meaningful way it’s little wonder people get so frustrated.

The continued presence of Mike Riley at the top of the organisation surely has to come into question at some point. I realise people will be quick to point out some parallels with the situation at Arsenal, but when the man at the top has presided over an organisation whose performance has been consistently sub-par, then surely the most obvious step is replacing him with someone new. Someone willing to take on the responsibility of making things better.

Anyway, Wenger will serve his ban, people will move on, referees will do what they do, and I suspect very little will change until the next time we have to revisit something like this – and it’s something that affects all clubs, not just Arsenal.

We’ll have a full preview of the game tomorrow, but in the meantime I’ll leave you with this week’s Arsecast in which we get a Forest perspective from Nick Miller, as well as all the week’s action and usual waffle with Dan Levy. Check it out/subscribe below. Have a good one.