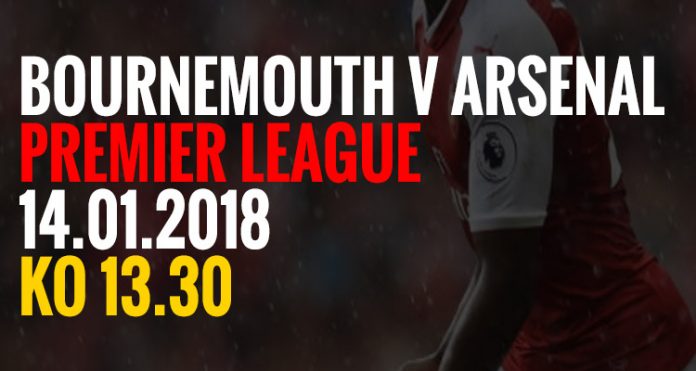 With just two wins from eight in the Premier League, nothing less than three points will do today as Arsenal face Bournemouth away from home. Our record and form on the road this season has been patchy, to say the least, and Arsene Wenger highlighted the importance of this game on Friday, saying:

There’s a massive importance for these kinds of games, of course. We have been distracted a little bit by the cups, but now we have to come back to the Premier League. It’s a very, very big game.

Here’s how the league table looks this morning:

I am making the assumption that Liverpool are going to drop a couple of points today, as Man City continue their relentless run of form, so it’s a chance to close the gap on them. That other lot won handsomely yesterday against an Everton side that are looking to reinforce with Theo Walcott, but anything less than a win today and we’re allowing a gap, slight as it is, to start to build.

In terms of the team news, Mesut Ozil is a doubt with a knee injury, while Koscielny, Monreal and Kolasinac remain sidelined – although the manager did say the Bosnian had a ‘little, little chance’ of being available today. The only one definitely back is Aaron Ramsey, and I’m curious to see if he goes straight into the team. With Jack Wilshere having suffered an injury scare against Chelsea in midweek, there’s scope for Arsene Wenger to recall the Welshman in place of Wilshere whose schedule has been pretty hectic in recent weeks.

From playing once a week, he’s done 90 minutes 5 times since December 13th, and while his form has been good, there’s always the need to manage his fitness in the back of your mind. Whether that’s something the manager is thinking of we’ll find out soon enough but it wouldn’t be a surprise to see him rested today against the club he spent last season on loan with.

Further forward, the big question is what he does with Alexis Sanchez. Wenger’s insistence that the speculation over his future and the possible departure had no impact on him being on the bench against Chelsea just doesn’t ring true. That’s fine, that’s what tends to happen with players in his situation, and when he came on he wasn’t found wanting for effort.

Will he start today? I’d be surprised if he didn’t, I think he should, but if he doesn’t that wouldn’t shock me either simply because of the circumstances which remain far from ideal. Goals remain in relatively short supply for the team at the moment and despite his form not being as stellar this season, he remains one of our most potent attacking options. He can score and create, and if Ozil is absent, we’d be diminishing ourselves further if we didn’t pick him.

Further forward, Alexandre Lacazette has now gone eight games without a goal, and the manager says the physical aspects of football in England are still proving a bit of a challenge for the French international:

What he has worked on is to cope with the intensity of the challenges. In France, if you go down it’s a free-kick. In England, you go down and it’s no free-kick. That is much more difficult for a striker to get used to.

This guy is used to scoring 30 goals per year so at the moment, even if he says no, I am sure he is frustrated. It is always a surprise for the players. You accelerate and play more and the body needs to get used to it, the mind as well.

I think it’d also be fair to say that we’re still not quite providing him with the kind of service he thrives on. His best moments in recent weeks have been ones he’s gone a long way to creating for himself, so if we can help him out by spotting those runs earlier and giving him chances in the areas he usually makes no mistake from, that would be a real help.

So, an ideal outcome today is Lacazette getting back on the scoresheet and sorting out that little drought, coupled with an Arsenal win however it comes about. It’d be great to see a sterling performance, but right now I’d take the points however we can get them. With no midweek football this week, there’s time to rest and recuperate a little so hopefully that will reflected in the team’s endeavor today.

If you can’t see the game later on, you can follow on the live blog – bookmark this page or check back here later for a post with all the details.

We’ll have pre and post-match stuff on Arseblog News, including a match report, player ratings, stats and more. Catch you later for the game.