Mohamed Elneny is funny, and Ivan Gazidis is under pressure

Morning all, welcome to Friday on an Arsenal free weekend. Normally, we’d be playing our FA Cup fourth round tie on the way to, you know, winning the FA Cup – which is what we do more than anyone else – but obviously that’s not the case this year after our third round exit to Nottingham Forest.

So, it means we have no game until we face Swansea on Tuesday. Time for the players to rest those beautiful, muscly legs – legs like Tarzan! – and get them ship-shape and glistening for an away trip in the Premier League. Will we have any new players by then? Will we have one particular new player by then? Time will tell, and I’ll touch on that in a little while, but to start this morning I want to give some props to Mohamed Elneny.

Not simply for an excellent performance against Chelsea the other night in which he played in midfield and then dropped back to become an auxiliary centre-half, but for his social media japery which, I think it’s fair to say, is pretty funny. To give some context to this, here’s something he posted at the end of December: 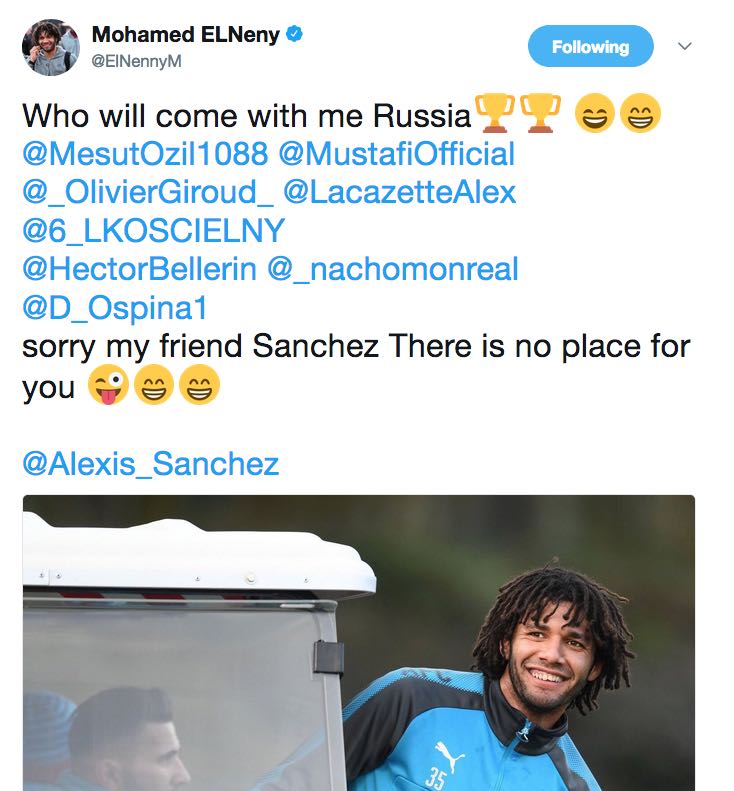 Now, everyone knows at whatever level of football you play, there’s a certain element of piss-taking goes on. Dressing room ‘banter’, or whatever you call it, goes on from Sunday League to Premier League, and this was some of that. What made it particularly amusing was the fact that Sanchez was, reportedly, particularly sensitive about the fact Chile didn’t make the World Cup, and here was one of his teammates having a very public dig.

Elneny could be just that kinda guy. He either doesn’t know, or doesn’t care, where the line is, and I choose to think it’s the latter. It’s all just football, not life and death, and if someone’s gonna get upset about a Tweet then maybe they need to relax a bit. Still, it suggested there was a little friction there.

So yesterday, some days after Sanchez had departed to United, and after we’d won two games without him, Elneny posted this: 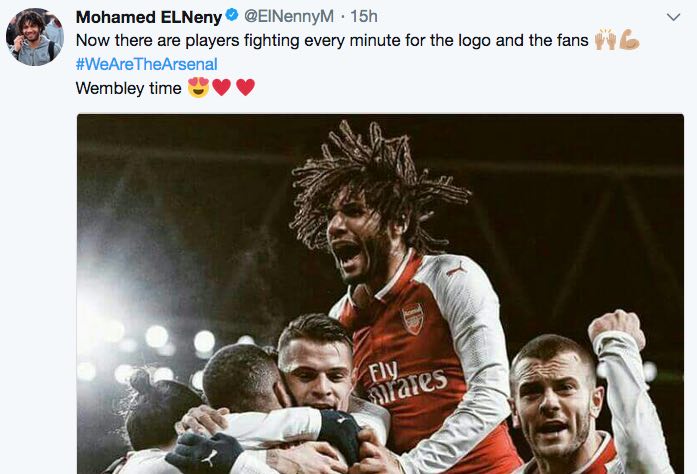 Hahaha. It’s not exactly subtle, is it? NOW there are players fighting … you don’t need to be a genius to work out the subtext of that particular message. And look, I’m not one of those people who puts our two wins this week down to the fact Sanchez is gone. He was ‘gone’ for Bournemouth and we lost, and I don’t want to downplay the contributions he’s made in all those games when his goals and assists were vital.

Nevertheless, in an era of media-trained, perfectly bland, talk a lot but say nothing of consequence footballers, it’s nice to see a little bit of personality. We take everything so, so seriously these days, and I’m bang on board with someone who’s willing to cut through that. Go Mo!

Meanwhile, the negotiations continue for Pierre-Emerick Aubameyang, and the longer it goes on the less promising it all seems. The latest is that Dortmund are annoyed with Arsenal for making bids they feel don’t come close enough to their valuation and you can understand why. We have a long tradition of low-balling teams, even if it’s not unreasonable to say that’s part of the negotiating process.

You don’t go in with your highest bid first etc etc, but we’re trying to convince Dortmund to sell us their leading goalscorer and, at the same time, appear unwilling to let them have Olivier Giroud as part of the deal. Regardless of whether Aubameyang wants to come, or whether personal terms have been agreed, they have a very strong hand because when it comes right down to it, they don’t have to sell.

Aubameyang has only made his position at Dortmund a bit awkward, it’s far from untenable, and with months of the season still to go they can just keep him, reintegrate him and watch him score lots and lots of goals, which is what he does. They have no reason whatsoever to make this easy or cheap for us. So unless we can make them a satisfactory offer, Arsenal will then have no new striker, no new goal threat, and will come home from Germany with egg all over our faces. So much egg, so many eggs, ostrich eggs too.

Because let’s be clear about this: it was made very clear to us that this was a deal being done by Ivan Gazidis, his new Head of Recruitment Sven Mistlintat, and his new contract guru Huss Fahmy. It was no accident they were photographed in Dortmund, beside Aubameyang’s easy to spot chrome car, and the message it was sending was, like an Elneny Tweet, not subtle at all.

It said, “This is the way transfers are done now. We are the transfer team, and the power has shifted from Arsene Wenger. This is the future.”

So, to arrive back from Germany empty handed would be a serious blow to Gazidis and his reputation. Some people have been prepared to give him the benefit of the doubt, a chance to show that he’s got the stones to step up and take charge and be influential when, eventually, the club is operating without the manager calling the shots in every single way.

Make no mistake, the public posturing over this deal, and Gazidis and his transfer dream team being front and centre, was a deliberate step by him to show that some of the power has shifted, and that he’s got what it takes. Thus, this will not be a transfer failure attributable to Arsene Wenger. It’s now almost a week later and a deal for Aubameyang seems more distant than it did a few days ago.

Can he turn it around? Can he get the deal done? Is he prepared to do what it takes to get the player he obviously wants us to have? We’ll see, but if not, there’ll be real damage done to his credibility, even if they’ll probably point the finger of blame elsewhere to cover their tracks. The ball is in your court, Ivan. Stop hitting it into the net.

Right, that situation is something we discuss on today’s Arsecast with @thegoonerholic and @northbanklower, as well as reaching the Carabao Cup final, and loads more. Listen/subscribe below, and for some extra reading here’s Tim Stillman on life without Alexis Sanchez.

Have a great Friday folks, more throughout the day on Arseblog News, and I’ll be back with some weekend waffle tomorrow.