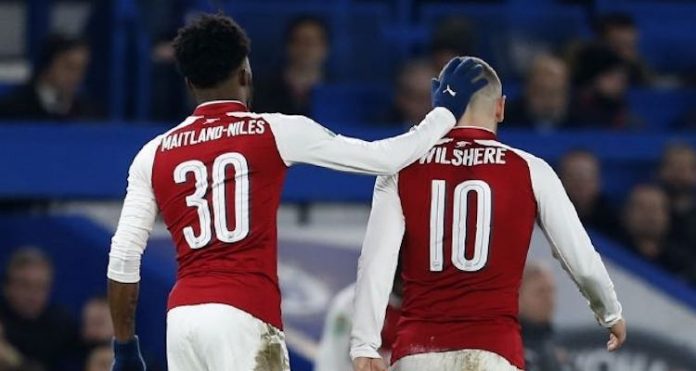 A 0-0 draw with Chelsea, the second of the season at Stamford Bridge, wasn’t the most exciting or enthralling game of the season, but given the fears I had going into this one – especially defensively – it’s not a bad result at all, and it showed this team does have some defensive mettle when they put their minds to it.

Without Mesut Ozil, and with a clutch of other injuries, the team was more or less as expected, although Danny Welbeck coming in for Alexis Sanchez raised some eyebrows. Arsene Wenger said afterwards his team selection had nothing to do with the transfer market – something I tend to believe him about when you consider he was quite happy to play Oxlade-Chamberlain at Anfield hours before selling him – but it’s impossible to look at the decision outside the prism of that Man City bid.

The front three of Welbeck, Alex Iwobi – who put in ‘mea culpa’ performance in terms of effort and endeavour after his late night indiscretions – and Alexandre Lacazette struggled to really trouble the Chelsea defence. The French striker had been ill all day and his presence in the starting XI was doubtful right up until kick off, but they weren’t able to cause the home side too many problems.

David Ospina was the busier of the keepers, Chelsea looked more threatening, hit the post, and either side of half-time had two great chances, but both Fabregas and Christensen failed to make the most of their headers. Ospina saved again from Morata, the Spanish striker continued his miserable run of form against us with a shot that went under the keeper from a tight angle but wide of the post.

Alexis came on for the under the weather Lacazette and ran around with great and very obvious determination, but couldn’t really make any difference from an attacking point of view. It was always going to be about how we defended, and if the central defenders could keep things at bay.

Both Chambers and Holding look far more comfortable in a back the three, and the former – along with Mustafi – made 9 clearances in what was a very solid performance overall. Some of what we had to do was last ditch, and we finished the game sitting very deep and hanging on a bit, but we did, and a 0-0 to take back to the Emirates isn’t a bad result at all.

We’re very pleased, it’s a good result. We were strong at the back and it was a good defensive display. I thought the boys dug in.

It was the first leg of a decisive tie and overall I must say we had a great solidarity, spirit in the side and overall it was a deserved 0-0. We couldn’t score in the last 20 minutes there, where there were opportunities that we didn’t use well, but overall we now have a job to do at home and we will do it. We have played Chelsea so many times that the two teams know each other very well and that’s why when the two teams decide to block the game, they can do it.

The second-leg takes place on January 24th, and fingers crossed we have some players left for it, because the injury situation is now approaching critical. That was not helped by the departure of Jack Wilshere midway through the second half with an ankle problem. Typically for him, it wasn’t strain or stress, his ankle got bent backwards blocking the ball, and that’s always a sore one.

The manager confirmed afterwards that it was a sprain but didn’t know how long he’d be out for. Hopefully not too long because midfield is an area that’s looking a bit light, especially as Francis Coquelin is expected to complete his move to Valencia today. Those expecting his sale to precipitate a dip into the transfer market are likely to be disappointed, with Wenger broadly hinting that the Frenchman’s departure would open up a midfield slot for the quietly impressive Ainsley Maitland-Niles, and that’s not an unreasonable solution really.

If he thinks the 20 year old is the future, then making some space for him in the squad by shifting a player who has barely featured in the first team this season is a good way of going about things. The issue really is what happens above that in terms of our more established players.

Like most, I’ve been both surprised and pleased by Wilshere’s recent form, but last night showed why putting yourself in a position in which you’re reliant on him is problematic. I believe he’s done enough to earn himself a new deal, and I think we should tie that down, but if – after all the years of evidence which show he will miss games through injury – we make ourselves dependent on his fitness, then that would be foolish.

There’s clearly scope to improve the midfield at that level, but whether or not there are any plans to do so during this window, I’m none the wiser. As for Alexis, Wenger was in no mood to explain his decision to leave him on the bench:

The team selection had nothing to do with the transfer market. I have not to justify every decision I make, I made over 1,000 games and I made over 1,000 teams and got it wrong every time. I have to make a decision.

He spoke again about how he wants to keep him, and while many have pointed to the fact Sanchez didn’t play in the Premier League 0-0 draw back in September, the circumstances were different back then. This time around, as I said above, you simply can’t look at that decision – to leave basically our most productive available attacking player on the bench – without taking into account the possibility that City’s bid and interest has played a part.

All the same, it wasn’t as if he left him out completely, and he threw him on for Lacazette with 20+ minutes to go, so he wasn’t wrapped in cotton wool completely. Based on no inside info whatsoever, just my gut, I think Alexis will go this month if we can identify and bring in a replacement, and I think last night’s decision was Wenger reminding people he’s in charge of what happens and when it happens.

It was another gamble, because a different result would certainly have provoked a more visceral reaction to his team selection, but as it is the 0-0 wasn’t a bad outcome at all and got away it. In the end, does it say something that we’re sitting here pretty pleased at a scoreless draw? Yes, I think it does, but it is what it is right now, and there you go.

Right, we’ll have all the news throughout the day on Arseblog News. More from me tomorrow, with an Arsecast, so join me then. Have a good one.