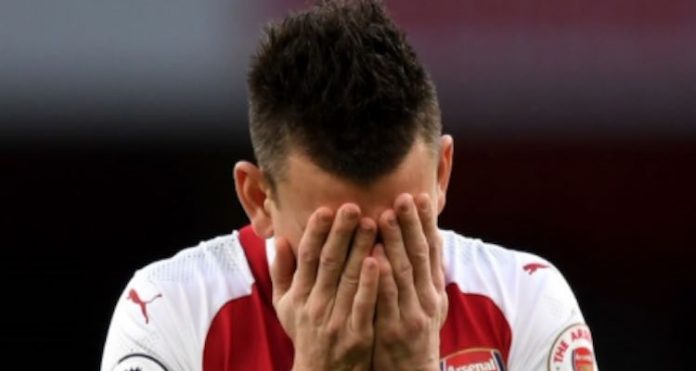 Hello everyone, holidays are over now, and people are getting back to work and into the offices again. Hopefully if you’ve had time off you’ve spent it well, and the routine of a morning blog helps ease you back into things.

There’s been no holiday for the team obviously, with a festive schedule and performances that have been somewhat underwhelming. In fact, our current form is pretty poor, as this illustrates:

In that run, they have played five of the current bottom eight.

In that seven game period we’ve only lost once – that ridiculous game against Man Utd back in November – but draws with Southampton (1 win in 12), West Ham (2 wins in 13) and West Brom (1 win in 20) have cost us points that would make our position in the table look far healthier than it is right now.

Yes, there’s the Mike Dean influence on that last game, touched on in yesterday’s blog and Arsecast Extra, but for all the manager’s talk of fatigue playing a part in the performance, it’s not as if that display was markedly different from many others this season. Away from home in particular we’ve failed to click more often than not, and the way we played at the Hawthorns was not an exception based on the schedule and our heavy legs, but more or less the norm.

A side note on the fatigue/rest thing, we potentially have eight games between now and January 30th if we win our FA Cup 3rd round game on Sunday. That’s a match every 3.5 days, and the only way to cope with that is rotating properly. What Wenger says about scheduling makes a lot of sense when you look at it objectively, but this is not a problem unique to Arsenal, and until something is done about it, it’s up to the manager to find a way to cope with his expensively assembled squad.

We do have a game in hand on Liverpool, sitting in 4th on 44 points, but the 6 point gap back to us in 5th is not one we can allow to get bigger. And with Chelsea coming to the Emirates tomorrow night, we have one of those must win games against big opposition we beat far too rarely.

Last season’s 3-0 win was one of the highlights of our season, in hindsight tempered by the fact it forced Antonio Conte into a rethink and a rejigging of his side that was so effective they put together a winning streak that played a massive part in them going on to become champions.

For our part, our reshuffle in mid April, which saw us move to a back three, was a last gasp antidote for a side that no longer responded to anything else. It worked for a while, and the FA Cup triumph was a wonderful day, but here we are a few months down the line and things are not any better defensively.

I don’t think the switching between the back four and back three is as much down to tactical flexibility as it is to a manager not quite knowing what his best set-up is with the personnel he’s got. For me it feels somewhat confusing, with players being played out of position at times (Maitland-Niles, for example), and others struggling for form and fitness.

The departure of Laurent Koscielny against West Brom is, in some ways, a worry, because on his day he’s probably our best central defender. At the moment, however, he’s struggling and you can’t help but wonder if we’ve asked too much of him. Is it realistic to expect a 32 year old centre-half who has a chronic, ongoing Achilles problem to play every three days? His schedule has been intense:

He has, like others in the ‘first team’, had the benefit of not playing in Europe this season, or in the Carabao Cup, but then few of them require daily treatment on an injury to allow them to play. It’s a worry because you’d rather face Chelsea with an in-form Koscielny than without, and also because it’s not clear who Arsene Wenger will ask to deputise.

Will it be Per Mertesacker in the middle with Shkodran Mustafi pushed wide, or Rob Holding brought in to play the Koscielny role? There was no Holding on the bench against West Brom, so you have to wonder if he’s picked up a knock too. The manager could also go to a back four, with Chambers + Mustafi, but that’s a duo over whom you might have some concerns.

Add to the injury list Sead Kolasinac, who went off against West Brom. The continued absences of Aaron Ramsey and Olivier Giroud – two players who have made telling contributions in games this season – are a problem, and we’re beginning to look a bit threadbare going into tomorrow’s game. We’ve been boosted by the return of Jack Wilshere, but can we expect the maximum from him when he’s been asked to do so much in recent weeks too?

Alexandre Lacazette hasn’t scored for six games, Danny Welbeck looks unable to make any kind impact when introduced from the bench, and Theo Walcott’s Arsenal career looks like it’s coming to an end, so goals are a bit of a worry too.

On Walcott, I’m cautious about writing him off completely because he is the kind of player you think is done and dusted until he gets a chance and scores, but it’s been made very clear to him by Arsene Wenger that he needs to leave to play regular first team football again. Despite scoring 19 goals last season, he’s seen just about 45 minutes of Premier League action this time around, and even over the hectic festive period he hasn’t started what would have been his first league game.

Some might ask if selling him now is a good idea, when other options are having troubles or sidelined with injury, but as Wenger appears unwilling to use him anyway, we might as well take whatever we can get for him and add it to the coffers. How or when we use that money is another topic for another day, but if the interest from Everton and Southampton is as real as the rumours suggest, then it’s one we should just do as quickly and efficiently as possible because the last thing we need is another saga.

We should get some team news updates today, I’m not sure if there’s a press conference this morning, but we’ll bring you the latest over on Arseblog News. For now, I’ll leave you with a New Year’s Day Arsecast Extra with Andrew Allen, discussing West Brom, our current form, and there’s plenty of everyone’s favourite Mike Dean in there too. Till tomorrow.