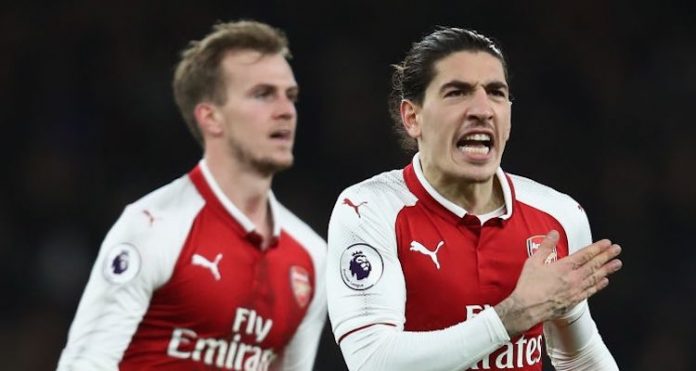 Another one of those games where it’s hard to know exactly where to start. A draw wasn’t ideal, but in the circumstances it was hard to argue against it being a fair result, and when you score a late, late equaliser and then almost throw it away straight from kick off you have to accept it’s probably not a bad one.

It was a game that began with both sides looking a little cagey, but after an Alexis free kick deflected wide it burst into life. Chelsea had a glorious chance to go ahead through Alvaro Morata, but the Spanish striker failed to take advantage of Calum Chambers’ indecision and when one on one with Cech he skewed his shot wide. That was followed by another great chance when a cross from the right found it’s way into our six yard box but he missed the ball completely allowing the Arsenal keeper to get down well and claim the ball.

At the other end Courtois made a superb save to touch an Alexis toe-bog onto his near post, then watched as the ball ran across the line and hit the other post before he got down to grab it ahead of Mesut Ozil. There were shouts for an Arsenal penalty when Ainsley Maitland-Niles went down in the box. Not for me, his heel caught Moses as he was running, causing him to trip himself up. If we’re going to complain about soft penalties – which we are – we have to be reasonable enough to admit when it’s not one for us, and this wasn’t.

Chelsea were threatening throughout, Bakayoko forcing Cech into a save before missing a glorious Fabregas pass drilled over the head of Rob Holding. Ozil, who was ghosting imperiously through the midfield all night long, cracked a shot not far wide, and in the dying embers of the first half Hazard set up Fabregas for a chance which he fluffed and put over the bar.

It was enthralling stuff really, and the second half even more so. The two goalkeepers stood out and once more Cech showed his quality with a brilliant double save, first from Morata who was clean through again, and then seconds later he pushed an Alonso header around the post.

At the other end a brilliant turn from Lacazette gave him the chance to put us ahead, but I thought he delayed his shot just a touch – perhaps some indecision about which kind of finish to attempt – and in the end Courtois made a fine stop with his feet. It thrilling stuff, and in the 63rd minute we went ahead.

After a period of pressure, Ozil played it to Holding near the edge of the box, there was a touch of good fortune as his pass deflected into the path of Wilshere but there was nothing fortunate about the finish as he cracked the ball beyond Courtois at the near post to make it 1-0.

Lacazette had a chance to double the lead – although had Alexis picked out Ozil at the far post it would surely have been 2-0 – and then Chelsea were awarded a penalty. Of course they were. For me, this is one of those where people say ‘There was contact’,  therefore it must be a penalty, but although Bellerin does catch him, there’s nothing in that contact that should provoke that kind of reaction from Hazard other than a dive. He made sure the referee knew he’d been caught, but clutching his shin when the Arsenal man barely touched his foot tells you everything you need to know.

Let’s be clear: Contact does not mean it’s a foul. If every contact was a foul, there’d be 10,000 free kicks in every game, 50 penalties in every game, and once more I think we were hard done by. As you’d imagine, Arsene Wenger was not best pleased after the game, calling the decision ‘farcical‘, but that’s the way things are going for us at the moment. Hazard scored it, 1-1.

That was followed by another incredible Morata miss who was having the kind of game that would have made Kaba Diawara look like a lethal finisher, but with just six minutes remaining Chelsea went in front. For the first and only time, Ainsley Maitland-Niles was caught out by an opponent, and Zappacosta’s low cross from the right was turned into the net by Alonso who had run off Bellerin and across a static Mustafi to poke home from close range.

You might remember Alonso the guy who smashed Bellerin unconscious with his forearm at Stamford Bridge last season, with pundits like Jamie Redknapp telling us he just wanted it more than our man who lay twitching on the ground. As such, there was something quite lovely about the fact Bellerin denied him a winner at our place with a sumptuous injury-time finish from his weak headed clearance. Make no mistake, this was not an easy chance on the half-volley, and it was a goal that most strikers would be pleased with.

At 2-2 that really should have been that, but there’s something fundamentally self-destructive about this Arsenal side. Having just equalised we should have been organised and not let them anywhere near our goal. Instead, we allowed Morata to go clean through again and for the final time the Spanish striker fluffed his lines, shooting straight at Cech before Zappacosta’s follow up shot cannoned off the crossbar. I mean, really.

All we can this morning is say ‘Thanks Alvaro’, because on another day, with another striker, we’d have paid a very high price for that kind of defensive instability. In the end though, a point I think we deserved because of the way we attacked and the spirit we showed to keep going, but even with complaints about the penalty, when you defend the way we did, you can’t say they didn’t merit something from the game too.

The manager’s post-game comments and press conference were dominated once more by questions about penalties and referees, and his irritation regarding that – the questions and the fact an official was once more in the spotlight – was very clear.

Look, what I find terrible is that we have just seen is a great football game and we talk only about things that are nothing to do with football. At some stage, you stand up in the morning and you say ‘we have seen a great football game’ but you are not interested in that. For me, that would be nice, that at some stage we speak about football again. What are we talking about? It’s nothing to do with football.

I would have liked for someone to ask him questions about the way we defended, for example, but we all know the way the media works. There is a thirst for controversy that cannot be quenched by asking a manager about his tactical set-up. That said, when you call a penalty decision ‘farcical’, days after another one that was even more so, it’s easy to understand why it went in that direction.

Wenger says he’ll contest the FA charges handed down to him following the West Brom game, and he may find himself answering more questions depending on how polite he was to his favourite referee Anthony Taylor after the game. I can understand his frustration, as a fan it’s annoying when you feel like you’ve been hard done by, but we shouldn’t overlook our own failings too.

As good as we were going forward – and there was a lot to like about the way we played in that regard – our defensive frailties were ruthlessly exposed by Chelsea last night, and but for Cech’s goalkeeping and the paucity of their finishing, we’d have seen a much less enjoyable scoreline. You think of a Chelsea side with Costa up front, for example, and he would not have been so wasteful.

The defensive system changes, the midfield set-up changes with it, the personnel in our back three or back four changes, but the inherent weaknesses do not. The manager seems unable to maintain any solidity back there. Perhaps it’s a confidence thing, but this is not a new phenomenon: we simply don’t defend well and we don’t appear capable of addressing those issues in any meaningful way (the signing of a young Greek central defender won’t do it as he’s going out on loan).

Last night we got away with dreadful defending, not just because of their rubbish finishing, but because we attacked well and scored a couple of very good goals to offset it. It’s when we can’t score that our defensive issues are really damaging though, and I think this is going to be what we get for the rest of this season. We’ll have games where we struggle up front and our generosity at the back will hurt us. We’ll have others where we ride our luck and outscore the opposition.

It’s just who we are. I’d like it to be different, but I don’t really see how that’s going to happen. So, a point leaves us 5 off the top four, and with two cup games between now and our next Premier League match (Bournemouth on January 14th) the manager will have a chance to rotate his squad and keep some key players fresh.

I suspect that the second half of this season could be something of a roller-coaster. Strap yourselves in folks, there’s no getting off now.