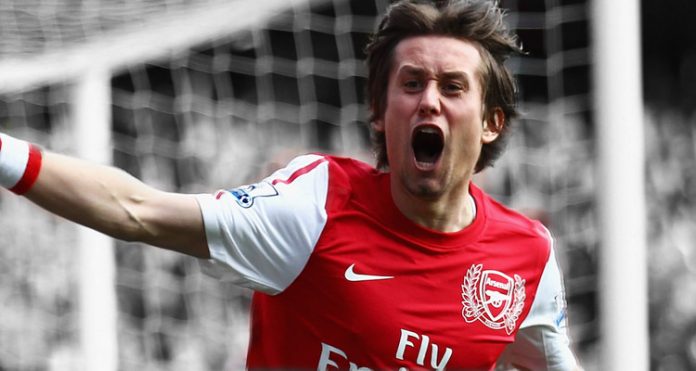 Not countries taking part in next summer’s World Cup, but nations whose red wine I sampled last night. From the way I feel this morning the only one I didn’t have was Chateau Neuf de Yer Da, made from the finest supermarket grapes – trampled by a grizzled old farmer’s feet in a gigantic vat in a garden shed in Mountmellick. Still, ’tis the season and all that.

We start with somewhat sad news this morning, and that’s the retirement of Tomas Rosicky. Down the years we’ve had players at this club who have never quite reached the heights we’ve wanted them to because of their injuries. People will obviously think of Abou Diaby, whose potential was never realised after the horrendous assault and injury that was needlessly inflicted on him early in his time at Arsenal.

Eduardo was another, a player who was just finding his goalscoring groove in England before he nearly lost his foot because of a disgusting challenge on that fateful day in Birmingham. He recovered well enough to score goals again, just not for us.

In the current squad there’s a bit of that going on with Jack Wilshere who, at 25, wants to sign a new deal with the club but remains in the dark about whether that’s going to happen. You can understand why people want him to stay, but stepping back and being objective about it you can also see Arsenal’s point of view and their desire to see him stay fit and healthy before offering new terms.

However, the one over whom I’m saddest, the one who, if I could make like Cher and turn back time and start over again and have him fit and healthy throughout his stay, is Rosicky. Sometimes you just love a player and he was one of those for me. He signed in the summer of 2006, and he was, for all intents and purposes, a replacement for Robert Pires who had left to join Villarreal.

That left a big hole for most Arsenal fans, and if you’ve been Arseblog reading long enough you’ll know he was my favourite player, so how we went about replacing him was of particular interest to me. If I recall correctly we announced the deal relatively early in the summer, so much so that when he spanked home a cracker in the World Cup against the USA he did so as an Arsenal player.

Early in his career, we saw him do something similar in a Champions League game against Hamburg, and you knew we had a player on our hands. Sadly, his time at the club was blighted by injuries, one in particular saw him miss ages as it turned out to be the most bizarre situation.

Some years back I was given a tour of the Arsenal medical facilities, and Colin Lewin explained that a knee ligament was giving him trouble and nothing showed up on the scans or x-rays but there was clearly a problem. What had happened was that the ligament had detached and sat back down exactly where it should have been, so everything looked ok. Such was the rarity of it that it became a case study afterwards, when they eventually figured out what went wrong.

It’s also easy to remember the emotion of his final season, his realistion that – after coming on as a 71st minute sub for his first appearance of the season in late January – he’d suffered an injury that he knew was going to pretty much end his last campaign with the club. All the same, he stayed on the pitch to ensure Arsenal held on to their one goal lead over Burnley and probably did himself more damage in the process. His interview afterwards was tough to watch because if anyone deserved a break from injury he did.

And yet we do him and his talent a disservice by defining him through his absences. We didn’t get to see as much of him as we would have liked, but what we got was worth remembering fondly. His talent was unquestionable, he matched that with hard work and commitment, and he was a supremely intelligent footballer who had wonderful vision and scored some superb goals.

That rocket at White Hart Lane; the breakaway goal against Sp*rs in the FA Cup which played its part in ending our trophy drought; the game at Anfield when he scored a couple; that wonderful move and chip against Sunderland when he gave us his own version of the Wilshere goal v Norwich; and more.

The sliding tackles, the passes with the outside of his foot, the no-look passes which prompted Phil Neville to say that if Rosicky had done that to him he’d have ‘two-footed him’, as if he’d ever have been able to get anywhere near him, the mallet-headed dimwit. He was, in short, a joy to watch at times.

In an era when there’s been an equalisation of talent and ability in the Premier League, where most professionals now are generally functional to a reasonably high level, and possess the fitness and stamina to offset some of their technical weaknesses, you still need the guy who has that something special, the ability to create a moment which lights up a game, to always look to do something positive, and Tomas Rosicky was one of those.

“If you love football, you love Tomas Rosicky,” said Arsene Wenger some years ago, and he’s never been more right about anything in his life. We talk about players ‘getting it’ and understanding a club and the fans, and he was one of those who genuinely did. So much so that he took time to call Arsenal yesterday to send one final message to the supporters.

It’s a shame that we never got to see the very best of him for as long as we should have, but for me he’ll always be a player I remember for the good things he did rather than the time he missed.

Till tomorrow, when we’ll preview the Liverpool game, and have a lovely fresh Arsecast for you.