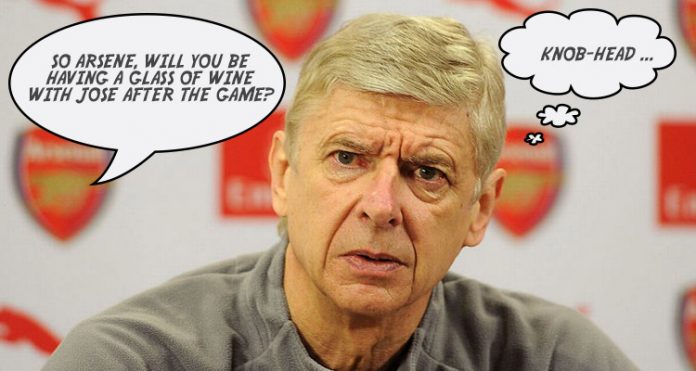 Welcome to Friday folks, and it’s been quite an interesting week all things considered.

Since Sunday we’ve won a tough away game in fun fashion – fun for us that is, not for the opposition; we racked up another three points and improved our goal difference considerably with a 5-0 win over Huddersfield; and appointed a Definite Not A Director Of Football in the shape of former Barcelona man Raul Sanllehi.

It’s decent preparation for the weekend when we face another considerable challenge in the shape of Jose Mourinho’s Manchester United. I am looking forward to this morning’s press conference in which some journalist will attempt to wind things up between Arsene Wenger and Mourinho, and regardless of what happens some other wind-up merchant will tittle-tattle it back to the United manager to try and spark some confrontational headlines.

Journalist A: Arsene, your relationship with Jose has often been strained. Would that make beating them more special?

Wenger: Look errr, I don’t want to go into that. It’s not about two managers, it’s about Arsenal v Man United.

Journalist A: So you don’t think about Mourinho as an extra motivation?

Wenger: No, I am just focused on my team and the next game.

Journalist B: Jose, Arsene Wenger said earlier he doesn’t pay any attention to you whatsoever and –

Mourinho: He says this but we all know he is expert in talking. How is a man without a title in so many years can speak like this? If I speak like this without winning … (waffle waffle blah blah twat)

Zzzzzzzzzzzzz [to infinity]. Don’t get me wrong, I’m all for a bit of managerial headbutting if there’s something there to butt heads over, but trying to manufacture something for the sake of it is beyond tedious. Particularly when those trying to do it tend to have all the wit of a shoe. Whatever else you think about our manager, his willingness to endure some of the stupidest questions you’ll ever hear without just looking at the person asking it like they’re something he found on the bottom of his shoe is endlessly impressive.

The big question ahead of this game is what Arsene Wenger does to replace the injured Alexandre Lacazette. His absence really is something of a blow, because it means the on-field relationship we need to build between him, Ozil and Alexis is once again disrupted. Between injuries to the others and some odd selection decisions here and there from the manager, it’s taken longer than we might like for them to start playing together on a regular basis and the signs have been generally very promising.

The two goal salvo from Olivier Giroud was welcome, but it ought to be nothing more than a reminder that he’s a player who can come on and contribute from the bench if we need him. I’d be very surprised if it prompted Arsene Wenger into starting him tomorrow, and I think the obvious replacement for Lacazette is Danny Welbeck.

The manager likes starting him against United, and the the only question then is whether he plays him as a direct replacement for the Frenchman, or shifts Alexis up top and asks Welbeck to play on the left. My suspicion is that it will be the latter, but we might get a better idea of that, and any other fitness issues, later this morning when the manager meets the press.

Meanwhile, there’s been further bad news for Santi Cazorla who revealed that he’s had to undergo surgery yet again. It’s the 9th operation he’s had since suffering that Achilles injury and the subsequent infection which caused further damage (documented last month). Arsene Wenger says:

That is for me, the disastrous, sad news of the day. I feel really sorry for Santi. He is a guy I admire, that we all love here, who came into training every day with a smile because he loved so much the game.

The manager was due to speak with doctors yesterday, so may have a further update today, but the plan for Cazorla to return in January must now be in serious doubt. Indeed, it’s not just the January comeback that’s in doubt, but his entire career. At what point does he have to consider his life after football and how pushing himself at 33 might impact that?

It’s such a shame for him, and to see a player of that talent and ability to have the final years of his career ruined by an injury and circumstances which are almost unprecedented. Certainly I’ve never seen anything like this before but let’s see. Maybe there’ll be a little miracle which will allow him to pull on the shirt again before he has to call it quits.

For some extra reading this morning, here’s Tim Stillman on our Massive Attack, and remember we’ll have all the latest team news and everything else from the press conference over on Arseblog News.

Update: It seems he did his pre-match presser after the Huddersfield game and it was embargoed, so no Mourinho high-jinks. What a shame.

For now, I’ll leave you with this morning’s podcast in which I chat to Philippe Auclair about the midweek win, plus the backroom appointments, who these guys are, and what they can bring to the club now and in the future. We have a Man Utd preview with Musa Okwonga and lots more. Listen and subscribe below.