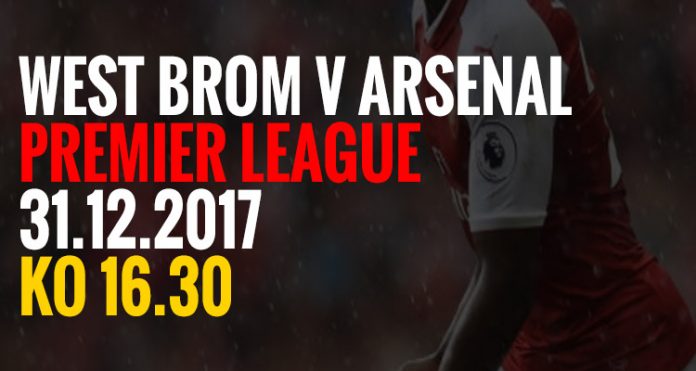 It seems strange to play football on New Year’s Eve, but there you go. The TV companies call the shots and they’ve obviously earmarked West Brom v Arsenal as the perfect build-up to Jools Holland’s giganto-suit revelry later in the evening.

Ordinarily you might look at a game against a team that’s bottom of the table and who haven’t won a game since the opening day of the season as one from which you could almost be guaranteed three points. However, such is the state of uncertainty that this Arsenal side has created in me, all I can see is a giant banana skin.

I could be wrong. A team with the quality of Mesut Ozil, Alexis Sanchez and the rest could turn over a team that’s so genuinely terrible it lost to Stoke. Of course we also lost to Stoke, so what does that tell us? We picked up just our third away win of the season at Crystal Palace on Thursday night, and another would be very welcome today, but it’s hard to feel any assurance about what we do and how we do it.

This isn’t just trying to find a negative. I honestly look at this game and think the potential for a slip-up is there. They’re in woeful form, bottom of the league, can barely score goals, but the only image in my mind is Alan Pardew dancing in a ski suit like stupid sexy Flanders after they pull off a most unlikely win.

I’m not normally like this, I can usually feel the positives and think we’re going to win. I know we’ve got the players who can do them damage. We have Alexis firing again and hopefully he’ll do the same again. Ozil has been in great form recently, and Lacazette is overdue a goal. I see all that.

Yet I also see a defence that is leaky and prone to mistakes, and a team that is really feeling the festive season in that it’s happy to give the gift of goals to the opposition. I hope we’re not as generous this evening as we were against Palace, and against Liverpool, and against Man Utd.

It’s not as if we’re incapable of keeping clean sheets, so I hope we can do what we did against Newcastle, West Ham, Huddersfield and Burnley in recent times, opposition of relatively similar calibre to tonight’s.

As for the team selection, it’s impossible to know if it’ll be a back three or a back four. If I had to bet I’d say away from home he’ll go with the former, but then you have to ask is that a bit cautious when facing a team with West Brom’s record. I guess much will depend on whether the Achilles of Laurent Koscielny can take another game with Chelsea on the horizon, and what he feels like doing in midfield.

The duo of Xhaka and Wilshere worked well against Palace, but if he plays a three in there it will really to be someone who adds balance, and I’m not sure Ozil does that – not to mention we need him to be further forward. So, your guess is as good as mine. I have a suspicion we might see a team picked with half an eye on Chelsea.

Not simply because we play them, but anyone who is carrying a knock of any kind may not be risked because of how much more difficult it should be on Wednesday. All the same, it’s about finding the balance because the three points tonight are just as important.

Meanwhile, there’s some interesting stuff in The Times today from Jonathan Northcroft about how things are changing at Arsenal. It’s behind a paywall – link here if you’re a Times subscriber – but it touches on the arrivals of people like Sven Mislintat (Head of Recruitment), Raul Sanllehi (Definitely Not Director of Football), Huss Fahmy (contracts) and Darren Burgess (Fitness).

It’s clear that things are moving behind the scenes, not simply to support Arsene Wenger in the final part of his Arsenal career, but also to put in place the structures we require for life without him. There are some choice snippets, but this was the one that caught my eye:

“In one meeting room Sven Mislintat is addressing members of his new network of scouts.”

This made me feel good, because scouting at Arsenal has long been an area overdue a shake-up. That we haven’t simply brought in Mislintat to work with our existing scouting team is excellent news. It’s not to say there aren’t good scouts with us right now, but to have new people with new contacts and new ways of thinking can only be a positive.

Perhaps this January transfer window might be too soon to see the benefits of that, but hopefully the summer is where we can see some improvement, not simply in the players that we target, but the ones we actually manage to sign – because at that stage Sanllehi will be there to get the deals done.

Right, that’s that today. For those of you who have been missing the live blog, we’ve been working on it (well, Tom has obviously!), and hopefully we’ll be testing out the new version later on. I’ll put a link up on @arseblog on Twitter before the game if that’s the case, and if you see any issues please reply to that Tweet as it’ll help us correct any problems.

Finally, a big thank you to all of you for your continued support throughout 2017. Whether it’s the blog, the podcasts, the news, or anything else we produce, thank you for reading, listening and all your comments, emails and feedback. I’d just like to take this opportunity to wish you and yours a very happy, peaceful and prosperous 2018.