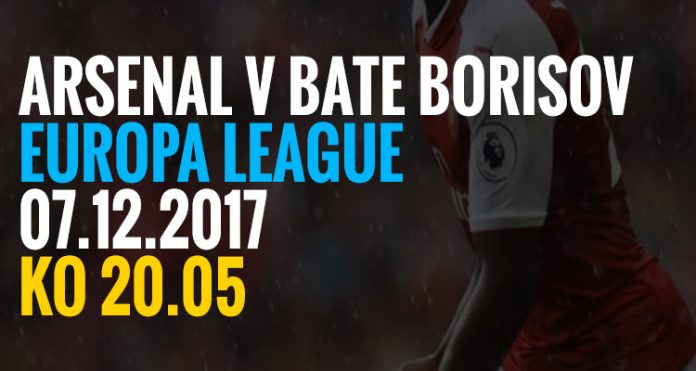 Step right up, step right up. Europa League fun and frolics for all the family lie ahead. See the incredible bearded man, the young boy who never grew up, and Ice-Skating Jack.

Those of us hoping to see Arsene Wenger throw out a team full of young talent for tonight’s game against BATE Borisov are likely to be disappointed for the most part as the manager sees this as a way to keep his second-string Premier League choices fit. You can understand it to an extent. If we have an injury crisis or a clutch of suspensions, it’s these guys who will be asked to step up, not the kids.

That seemed to be in the manager’s thinking as he explained what kind of a team he’d be sending out. Asked if he’d be rotating more because this game would have no effect on who wins the group, he said:

Not too much because I have many players who need competition, because we go into next week, another week with three games. We’ll play tomorrow with quite an experienced team.

It means the same chaps who have scored just the one goal in the last three stupefying Europa League games will be given the nod tonight. We might see team along the lines of: Ospina, Chambers, Mertesacker, Holding, Nelson, Coquelin, Elneny, Maitland-Niles, Walcott, Wilshere, Giroud.

I do hope there’s room for a couple of the kids at least. Let’s make some concession to the future by including Nelson at wing-back, rather than playing Mathieu Debuchy in the back three. With all due respect, he’s not a player who is going to be here in the long-term, so let’s play Calum Chambers – who just signed a new deal – in there instead.

That would allow Nelson to play at wing-back, although I’d really like to see him get a go in the front three, but given the manager’s comments about Theo Walcott and how he wants to keep him, he’ll be the one given the nod there. Jack Wilshere will probably start on the other side with Giroud up front.

It hasn’t really worked on a consistent basis during the Europa League campaign. There have been flashes here and there, the first game against tonight’s opposition saw us score four times, so maybe with home advantage they might click and do something similar, but it’s hard not to worry that we might just a bit more of what we did in the last few games which is unlikely to tell us much we don’t already know.

Maybe being a couple of goals to good would prompt the manager into making some relatively early subs, and it would be good to see some of the youngsters given a bit of playing time. As I said though, the result means nothing to how the group finishes, and after this fixture this competition becomes quite a bit more competitive.

The knock-out stages include teams that have dropped out the Champions League, and they add some real quality to mix. It means that at some point we could face the teams like Atletico Madrid, Sporting Lisbon, Napoli, RB Leipzig and Borussia Dortmund – and those are games for which the manager is going to have to seriously consider how he sets his team up.

One of the so-called benefits of playing the second string in Europe is that it keeps the ‘Premier League’ team fresh. We can see it’s had an effect in terms of injuries, because only the stricken Santi Cazorla remains an absentee, but we haven’t taken advantage of it when it comes to performances and results.

At this exact time last season, when we were juggling both Premier League and Champions League, we’d lost just one game and that was on the opening day of the season. This side have already lost five times in the league, so the freshness has not been translated into results.

Perhaps we’ll see greater benefit later in the season as key players don’t end up quite as fatigued as others, but for now the inability to marry our rotation with better results has been a bit of a disappointment. Let’s hope we can finish the group stages with something of a flourish, a twirl, and creamy how-do-you-do.

With January approaching, transfer speculation about players going out is starting, and this week Olivier Giroud was urged to ‘find a solution’ to his lack of playing time by the France assistant manager. With a World Cup next summer, they want him playing more regularly, but the manager is not inclined to make decisions about what’s best for the French national side:

Quite right too, but you could look at one or two players in this squad now and think that the right thing for the club would be to cash in, move them on, and reinvest. Even if that means waiting until summer to do so. I suspect there will be some transfer activity next month, not much, but a couple of outgoings and maybe one coming in would just refresh things a little bit.

Right, that’s it for this morning. We’ll have all the pre and post-game stuff on Arseblog News, and thanks for all the comments and feedback on yesterday’s post. The was an interesting variance to the answers, although the one that played out most was a kind of apathy, seen this all before.