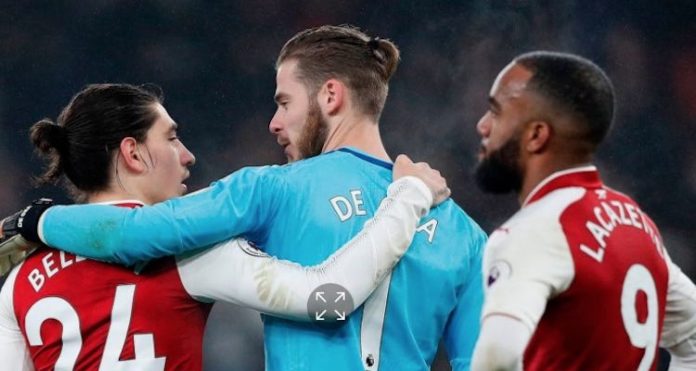 Where to start? The result, I guess. We lost. Yes, we played well, apart from the glaring errors which cost us goals – which I find hard to separate from our overall performance, dominated possession and chances, but for me that makes what happened yesterday all the more frustrating.

I understand there’s some comfort to be taken by focusing on how well we did after going behind, and there were some very good individual displays. However, imagine if we’d played that well without being so horribly careless and sloppy, we’d be enjoying a much brighter morning – and that’s even taking into account how United’s approach to the game would have been different without the two goals we gifted them.

The 4th minute of the game, Laurent Koscielny’s cross-field pass was intercepted, Sead Kolasinac wasn’t quick enough to react when we lost the ball, United came forward and Valencia’s shot went through the legs of Monreal and Cech to put them ahead. Hardly an ideal start.

Yes, Mustafi was put under some pressure but that’s what happens in football. He could have played a pass back to Cech or even returned it to Xhaka in midfield, but he dallied, got caught on the ball, Martial’s lovely flick put Lingard through and he doubled the lead.

The German then went off with what is, as yet, an unspecified injury, Alex Iwobi came on, we went to a back four, and then the hammering began. Arsenal were relentless and while people talk about how it suited a Mourinho team who are happy to play defensive football, this wasn’t exactly a defensive masterclass from them.

You don’t allow as many chances as Arsenal had if you defend well. You don’t have you goalkeeper to thank for what was an extraordinary performance if you defend well – and while I’m not inclined to be that magnanimous the day after a defeat to United, my cap is well and truly doffed to David de Gea because he was nothing short of brilliant.

So, if we’re playing down their defensive solidity, do we not also have to ask if we made the most of our chances? Can you really say you played well when you have that many opportunities and only score one goal? You can say one part of our game was excellent – making the chances – while others were not – taking the chances and defending.

Still, the early second half goal was just what we needed. Alexis crossed from the left, Aaron Ramsey’s run was brilliant and the cushioned assist for Lacazette gave the Frenchman the chance to get us right back into the game and he made no mistake. That’s seven and seven in that little combo, by the way: seven goals for Lacazette, and seven assists for Ramsey – cementing his position as our most creative player by three over Ozil and Kolasinac (stats here, you can sort by whatever category you like).

Arsenal then had another six attempts at goal as we looked for an equaliser, and how it didn’t arrive was down to de Gea – the double save from Lacazette and then Alexis on the rebound was incredible goalkeeping, although I think the Chilean should have done better from close range with the keeper flailing a bit.

Then Alexis gave it away, United countered, Pogba left Koscielny for dust and crossed to Lingard for a tap-in. Xhaka, who had done the hard part and tracked the United man the whole way into the box, simply switched off at the last second, something he’s prone to, and once again we didn’t as much shoot ourselves in the foot as blunderbuss half our leg off.

We still had half an hour to try and get back into, aided by the sending off Paul Pogba for a really nasty foul on Hector Bellerin (the risible attempts of some to defend it would hilarious if they weren’t so pathetic).

We brought on Giroud and Welbeck for Kolasinac and Xhaka, and the former United man should have had a penalty in the final few minutes but Andre Marriner didn’t see it that way. I’m not condoning cheating, but I do wish Danny had stayed down and cast more doubt in the referee’s mind, the fact that he got back up so quickly – and I understand why he did it – didn’t really help his cause. It doesn’t excuse the referee getting it so wrong though.

That would have made what was left of the game and the five minutes of injury time more interesting, but I don’t think we can blame the referee in any way. This wasn’t a defeat of his making. It wasn’t even down to the manager who picked the team we all wanted to see, including the surprise return of Lacazette who had been ruled out earlier in the week. It wasn’t down to United outplaying us, it was Arsenal pressing the self-destruct button more than once, and when you do that you get punished in this league and especially by a team as good as United.

More than anything individual errors are what cost teams. Sometimes there’s such a gulf in quality between two sides that the outcome is obvious. Arsenal v a non-league team, for example, but in the Premier League games are decided on marginal differentials and it’s down to concentration, awareness, and ensuring you don’t hand the opposition gift-wrapped chances like we did.

And it’s not to say that we should demand perfection, that’s not possible either, but how you react to errors is another quality, and I really feel like we’re too slow when things go wrong. Sometimes we get away with it, think of Koscielny’s block to deny Huddersfield an equaliser on Wednesday, but there’s just a bit too much ball-watching/someone else will sort this out, going on in this team.

On Koscielny, it’s hard not to look at his performance and think that it’s probably not a good idea to ask a 32 year-old who suffers from a chronic, ongoing Achilles problem to play three games in six days. Does that excuse his performance? No. It might go some way to explaining it though.

Afterwards, Arsene Wenger acknowledged that despite the good elements of our performance, you can’t escape the bad ones:

We played well but there is nothing more frustrating when you have that quality of performance and nothing to show for it at the end. The attitude was impeccable until the end, but you cannot make the mistakes we made at the beginning.

I can’t disagree. It is positive when you make that many chances – particularly when facing another side in the top four – but for me our performance is defined by our mistakes. To play as well as did but to spend 80 minutes basically firefighting because simple carelessness has cost you two goals doesn’t really do it for me, sorry.

It exacerbates the frustration because you can’t help but wonder what the outcome would have been like without our generosity. I can only hope that the team’s outlook on this is one of frustration too, because they must know on another day this was a United side they could have beaten and beaten well – and it’s not often you can say that.

However, our statistical domination, our chances created, our shots on goal, and all the other positives are – for me at least – no comfort this morning when we’ve dropped three points and seen our home record this season broken. Our next league game provides another away challenge, this time at Southampton, and if we can replicate the good from  yesterday and leave out the bad, you could be reasonably confident of a win.

And yet, this is why doubts remain about us. After impressive wins over Sp*rs and Huddersfield and three points at Burnley, we were perfectly set up for the United game, but Christmas came early for them in the shape of three lovely Arsenal presents. Once more we were masters of our own downfall, and despite how well we performed the scoreline tells its own brutal story.

Back tomorrow with more and an Arsecast Extra.