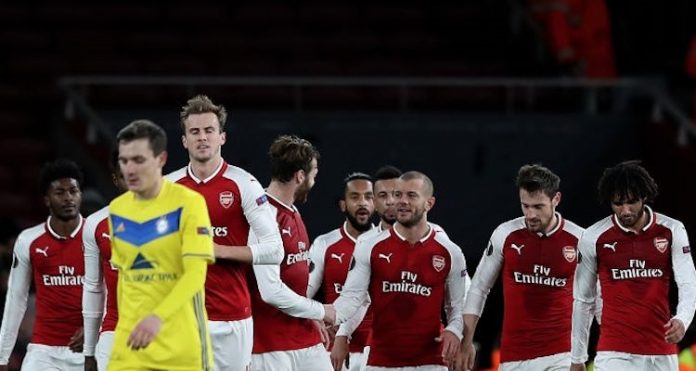 There may not have been many there to see it, but Arsenal put on a show for those who did turn up. The smallest crowd of the season saw the biggest win of the season, a 6-0 thumping of a BATE Borisov side who, let’s be honest, weren’t that good. And I’m being a bit kind there.

However, regardless of how not good the other side are, you still have to do the business, and I think we’ve all seen our team play against far inferior opposition in the past and fail to be as convincing as we should be.

There was something of a surprise in terms of the formation, Arsene Wenger reverting to a back four with Mathieu Debuchy and Ainsley Maitland-Niles as full backs, and perhaps a chance for him to try something by playing Rob Holding and Calum Chambers together at centre-half. The young England duo really didn’t have very much to do, but I thought it was an interesting selection all the same.

The opening goal came from an unlikely source, Mathieu Debuchy cracking home a superb shot from just inside the box after the ball broke to him following what looked like a foul and a probable penalty on Theo Walcott. He didn’t wait for any whistle though, punching a fizzer beyond the keeper to make it 1-0.

Walcott had been denied by the BATE keeper moments before he actually scored. Shortly after that sensational work from Danny Welbeck bamboozled the defender into laying the ball directly in Theo’s path, and he made no mistake from close range.

It was like ‘save one, let one in’ for Scherbitski because minutes after saving from Wilshere, he could do nothing about the midfielder’s first goal for the club since a cracker against West Brom at the end of the 2014-15 season. This time he picked the ball up from Walcott, cut inside a defender and leathered it into the net to give us a three goal cushion going into the break.

A Walcott cross was turned into his own net in some style by a defender to add another goal early in the second half; Walcott was fouled for a penalty which Giroud scored twice – the first effort chalked off for encroachment; and then Mohamed Elneny got in on the act, curling a Wilshere pass home first time to make it 6-0.

Having already brought on Reiss Nelson for Walcott, Arsene Wenger threw on Eddie Nketiah and Joe Willock for Welbeck and Elneny, and after that the attacking momentum seemed to stop. I can’t really remember any further chances to score and the last 15 minutes or so was basically going through the motions of a game which was well won at that stage.

It was done in a stylish way and in a technically high-quality game from our side. You can say the opponent was not exactly the level of the Premier League and I would agree with you. But you can only do your job and that’s what we did in a convincing way and with a remarkable spirit. We finished the job well in this group stage.

Can’t really argue with that. It was game which would have had no effect on us had we lost beyond professional pride, but after three unconvincing European outings it was good to see the team step it up last night. There were some lovely goals, some good individual performances – Wilshere and Walcott in particular – and if you just take it on face value then it was quite enjoyable. I don’t think it’s one of those games that really deserves any greater analysis beyond the fact we scored six goals on a cold night which went some way to keeping those who attended warm.

The attendance is a talking point, of course, with the lowest ever official attendance at the Emirates. 55,000 tickets might well have been sold, but nowhere near that turned up. It’s something Wenger understands:

You respect the decision of your fans. They knew we were top of the group anyway. You could basically expect that. Look around at the Champions League last night in game number six. I’ve seen many grounds that were not full and were half empty. That’s a bit the problem of the group stage.

It’s true, and a game on a Thursday night against BATE Borisov when you already have the group won is never going to be the most attractive – especially after a disappointing defeat in the last league game. I suppose the key thing is the difference between the tickets sold and how many people used those tickets.

Perhaps it’s fanciful or idealistic, but wouldn’t it have been great to see those tickets redistributed in some way, filling the ground with young fans who perhaps don’t normally get to go or who can’t afford to? I understand it’s not as easy as it sounds, but surely when it comes to our ticketing mechanisms we need to start taking nights like last night into account and as part of our planning.

It’s clear that things have changed a lot. It’s not just about selling corporate packages to bigwigs – especially not in the Europa League group stages – so it would be great to see the club have a good think about this and how they might be able to offset the no-shows to some extent and provide an opportunity to irregular/new fans.

We now have to wait until Monday when the draw for the knock-out stages is made to see who our opponents are going to be when the tournament continues next year. There are some good teams in there now, which could well make for more interesting and attractive ties, but that’s something we’ll touch on when we know more.

Right, that’s that. For those of you expecting an early morning Arsecast, late night football on a Thursday tends to scupper that, but there will be a podcast at some point today, but probably closer to lunchtime.