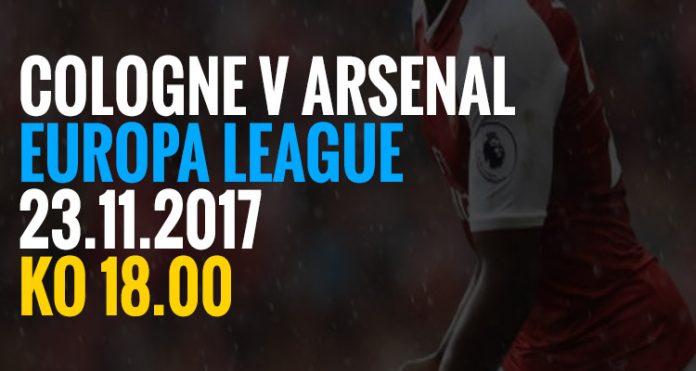 It’s Europa League action tonight as we face Cologne in Cologne. A win tonight and Arsenal top the group, something which appears to be in the forefront of Arsene Wenger’s mind when it comes to his team selection.

Throughout the tournament we’ve leaned heavily on youth, particularly in midfield where Reiss Nelson, Joe Willock and Ainsley Maitland-Niles have featured, but this time around it seems as if the manager is going to use his more experienced ‘fringe’ players. Speaking ahead of the game, he said:

Well, we have an experienced team. Overall I believe that you will see that every single player has a big experience in the Premier League. We have brought some young players as well who have played in former games and done extremely well, like Joe Willock, Eddie Nketiah and Reiss Nelson.

Overall I believe we have a good mix between experience and young players.

There’s no Theo Walcott who misses out through illness, and while some have expressed a desire to see Nelson given a go in the front three – something I wouldn’t mind seeing myself – I think it’ll be seen as a chance to give Welbeck some minutes. If, for example, he played Wilshere deeper in his more natural central midfield position, there’s scope to play both Welbeck and Nelson either side of the fit again Olivier Giroud, but it remains to be seen if Wenger will do that with Jack.

I think he’s looking at this game as one for which he needs the maximum experience in the team, giving him scope to change things if it’s comfortable later on. It would then allow him to select a team full of youngsters for the final game at home to BATE Borisov once winning the group has been confirmed.

It would be fair to say that tonight’s opposition come into this game low on confidence and belief. Having played 18 games this season, they’ve won just twice, drawn three and lost thirteen times. They prop up the Bundesliga with just 2 points from 12 games, and Arsenal will be clear favourites for this one.

It’s again a chance for some of the players outside the ‘first XI’ to show what they can do, something Wenger made clear again:

We are Arsenal. We want to always win. We are always under pressure. It is very important that we also show a good performance tomorrow. The players that came, that travelled with us here, they of course want to give a good account of themselves.

The first couple of Europa League games were something of a tonic, the fact that it was different made it a bit more interesting, but the last two fixtures against Red Star Belgrade have felt like something of a chore. Hopefully there’s a bit more colour to tonight’s game and the Arsenal performance, and that we get the win we need because it would be fun to see a full on League Cup team for the final game at the Emirates.

There are all kinds of reports and whispers about Barcelona being interested in the German, with reports this morning of a deal being reached between the club and the player’s agent – remember Ozil himself can’t negotiate until January, but we’re all wise enough to know the realities of situations like this.

There are also stories linking Alexis with a move to PSG and you can see why rumours involving the star duo would gain traction. The contract situations, the manager kind of opening the door the possibility of a January departure, and the nature of transfer stories themselves. It’s the classic case of believing everything about players leaving the club while at the same time dismissing those involving players coming in, but unless Arsenal have lined up replacements – something I doubt at this point – it’d be crazy to let either of them go.

They showed on Saturday against Sp*rs that once they’re on the pitch they’re committed, and when you look at our two main aims this season – finishing in the top four and winning the Europa League – we have a much better chance of doing that with them at the club. Yes, money would help when it comes to replacing them but it’d be tantamount to writing off half a season when you lose that many goals and assists, so I’d take all of these rumours with a hefty pinch of salt for now.

Right, we’ll have all the pre and post-game build up over on Arseblog News, and just another reminder that the arses are back if you want to comment here. We have added the link for mobile, so that’ll take you directly to the comments for each post, and you can sign up here for an account – click login at the top right and then go through the very simple process. You can go traditional with a username and email, or you can use a social media account – Twitter, Facebook or Google.

Have at it, and for some extra reading this morning, here’s Tim Stillman on Alex Iwobi.

Back tomorrow with an Arsecast and more.