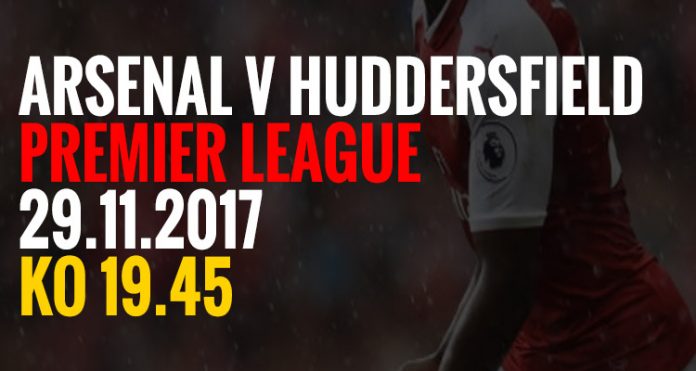 We’re back in the Premier League saddle tonight with a home game against newly promoted Huddersfield. On paper a fixture people would expect Arsenal to cruise, but anyone who has seen them this season will know we should take nothing for granted.

They’ve beaten Manchester United at home and almost held Man City at the weekend, so they’re a team with something about them. It’s not escape Arsene Wenger’s notice either, who says:

It’s a massive game for me because I watched their game against City, they didn’t deserve to lose. This team has come out from hell, you have to play 46 games in the Championship to get out of it, and you need to be ready for a fight. With all the teams that come up, you realise that especially in the first season they have that kind of fighting spirit that makes them dangerous for every Premier League side, no matter what kind of names you have on the teamsheet.

With Manchester United coming to town at the weekend, the manager was asked if his team selection tonight might have one eye on that game. ‘Zero eye!’, he insisted, but I wouldn’t be surprised to see a few changes tonight. Nothing substantial, but a few to add some freshness tonight and keep some freshness for the weekend.

Mesut Ozil was back in full training so he could well be an option, meaning that he could perhaps make a change in midfield. Aaron Ramsey seems the obvious one to me, showing some caution over a player who runs a lot but is also prone to hamstring and calf strains may be a sensible idea – despite the fact the Welshman’s form is good at the moment.

I have a feeling we could see Olivier Giroud start tonight, perhaps with Danny Welbeck coming in too. There’s potential for Jack Wilshere to start also, depending on how Wenger views him. If he’s now simply part of the front three then I don’t think we’ll see him, but if he sees him as fit enough now to play in his more natural central midfield role then it’s possible.

At the back, as effective as that back three has been, you have to ask if Laurent Koscielny and his Achilles can play three times in a week. If using him tonight makes him a risk for the weekend then we should think about a different option. With Per Mertesacker, Rob Holding and Calum Chambers all fit again, it’s not as if we don’t have cover, so we’ll wait and see what happens there.

As ever it’s about finding the balance, ensuring that we don’t disrupt things too much, and that we maintain an impressive home record. We’ve won all six at the Emirates this season, conceding just four goals and three of them were on the opening day against Leicester. With United winning and Sp*rs slipping up last night, there’s a bit extra in the three points tonight, so let’s hope we take this game and tonight’s opponents as seriously as we should.

Given the fact his ‘first team’ haven’t been involved in European action this season, as they would have been with the Champions League, the manager might decide to go full strength for this game as fatigue won’t be as big an issue, but we’ll see. Let’s just win this one, then focus on doing United on Saturday.

Meanwhile, the quiet revolution behind the scenes continued yesterday with the appointment of former Barcelona man Raul Sanllehi as Definitely Not Director Of Football. His role is entitled ‘Head of football relations’, and he’ll join the club officially in February.

His job spec, via the official site, says that he will ‘lead future player negotiations and work alongside manager Arsene Wenger, chief executive Ivan Gazidis and contract negotiator Huss Fahmy. He will also represent and support the club with international and domestic governing bodies.’

So, he’s Definitely Not Director Of Football, that much is clear, despite having a job that seems to entail many of the things that a Director of Football would be responsible for. I think we all know why, and that’s ok. It’s an appointment that isn’t short-term, it’s to prepare the club for life after Arsene Wenger when we’ll transition from a club with an all-powerful manager who does many things himself to one with a head coach who requires support structures around him.

Having already brought in Sven Mislintat as Head of Recruitment, this is another big appointment for the football club. We have long needed to address the dearth of football knowledge and experience at board/executive level, and Sanllehi’s many years at one of the biggest clubs in the world addresses that in a significant way.

Having been critical of the lack of action in the past, I’m happy to give credit where it’s due – both Sanllehi and Mislintat are two very forward thinking appointments by Arsenal. We’ve brought in somebody whose track record of identifying talent is superb, as well as a man whose work has seen him negotiate and finalise some very difficult transfers, and when you consider our weaknesses in both those areas over the last number of years then it’s clear we’ve moved to address those in a big way.

It also raises questions over what the future holds and how soon the big change is coming. You can’t help but wonder if this might be Arsene’s final season, going out in the summer after the club have put in place the people to enable us to bring in a modern-style coach, as well as avoiding the drama of the final season when people will ask consistently what’s going to happen at the end of his contract.

Obviously that’s just speculation on my part, I don’t know anything about that one way or the other, but I guess we’ll see soon enough.

Right, that’s your lot for this morning. We are having some issues with Arseblog News at the moment, but hopefully we’ll have that sorted out as quickly as possible this morning. When we do there’ll be more match build-up, as well as all the post-game stuff.