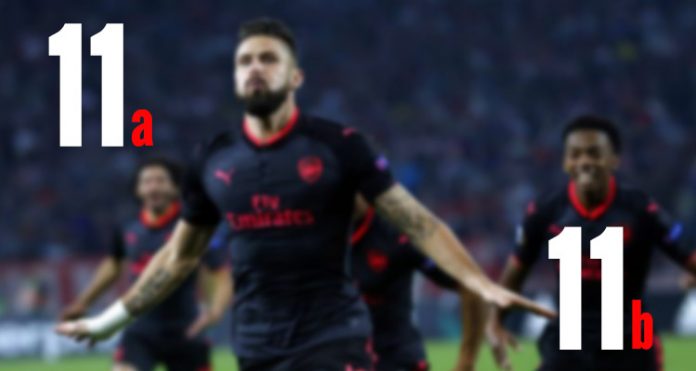 Arsenal travel to Cologne today, for our fifth Europa League game of the season. Top spot in the group hasn’t been secured yet, but a win against the Germans would ensure that, thus allowing Arsene Wenger the luxury of even greater rotation in the final game – assuming that’s something he wants to do.

In many ways playing our European football in this competition this season is currently an advantage when it comes to the Premier League. The fact we basically use a completely separate team for the midweek fixtures means the ‘first XI’ remain rested for the domestic games.

Apart from the opening game, which saw Alexis Sanchez, Hector Bellerin and Nacho Monreal play in the 3-1 win over Cologne, we haven’t used a single player from that Premier League line-up in any of the other games, and our record after our European exertions has been pretty decent – bar one match.

After the win over Cologne we went to Stamford Bridge and drew 0-0, a result viewed at the time through a pretty favourable lens, given what happened in our previous away game at a top six rival. The trip to BATE Borisov was followed by a fairly routine 2-0 victory over Brighton, and we beat Everton 5-2 at Goodison Park three days after securing a 1-0 over Red Star Belgrade.

The only hiccup so far has been the 3-1 defeat to Man City which came after the 0-0 at home to Red Star, but that’s a game I think you have to take on its own merits. The manager’s selection decisions, and some iffy refereeing, contributed to a defeat which, on balance, you can’t argue too much about. City were by far the better team on the day, in much the same way we were against Sp*rs, regardless of whether or not you think we got a bit of luck with some of the decisions.

The benefit of being able to rotate to such a large extent is obvious when you consider that five of the six Premier League games we play after European games are away from home. On Sunday we go to Burnley, and after our final game at home against BATE Borisov, we have a trip to Southampton.

In the last few seasons we’ve seen teams like Liverpool and Chelsea take advantage of the fact they have no European football to get a run of results in the Premier League, and for now that’s sort of what Arsenal have. It’s not quite the same, because no midweek games at all allow for greater preparation and focus on the next game. Arsene Wenger has to train and select his side for a match, return late, and deal with restricted preparation time for the weekend game, but in terms of what it means for the players he can pick it’s definitely a bonus at this stage of the competition.

With no more Interlulls, it’s now time for those players to really get some points on the board and to build some momentum. It’s heading towards that time of the year when there’s so much football and so many points to play for that a good run of results can really have an impact on your position in the table.

You look at the fixtures and you see some relatively winnable games, but you can’t take anything for granted in this league – as we well know. Then there are games against the big sides. Man United, Liverpool and Chelsea all come to visit in the next six weeks, and given how tight it is in that group behind Man City, they’re almost your cliched six-pointers.

However, defeats to Watford and Stoke on the road this season show us that we’ve got some improvements to make and some questions to answer about our away form. The team has shown what it’s capable of at home, our record there is excellent, and while many expect that, it’s not as if the Emirates has been a noisy cauldron of hate, or the most intimidating place for the visitors. The good results have been down to team doing what needed to be done, and there’s really no reason why they shouldn’t be able to replicate that away.

On Sunday we go to Burnley, a team currently riding high in the table who are level on points with us, and who have built a reputation for being difficult to beat at Turf Moor. Last season was unquestionably a struggle, and only a bizarre, injury-time handball goal from Laurent Koscielny got us the three points.

Yet they were far from invincible at home, losing 6 times in total, although their 10 wins and 3 draws there went a long way to securing their Premier League survival. They have a very defined way of playing, sitting deep, inviting shots from distance which they love to block, and that’s surely something the manager will be aware of for Sunday. If he displayed some tactical acumen in the win over Sp*rs, it’ll be interesting to see what kind of solution he has for this weekend.

Of course that’s something we can discuss further closer to the game, and we do have tomorrow night to think about first. We should get team news later on, with fitness updates on Olivier Giroud who missed the derby with a thigh injury, and Theo Walcott who missed out through illness. It might be that he sees this game as a way of giving Danny Welbeck some minutes after his return from injury, but beyond that it’ll likely to the same kind of team we’ve seen throughout this Europa League season.

We’ll have all the updates you need over on Arseblog News throughout the day. A full preview of the game and more tomorrow.