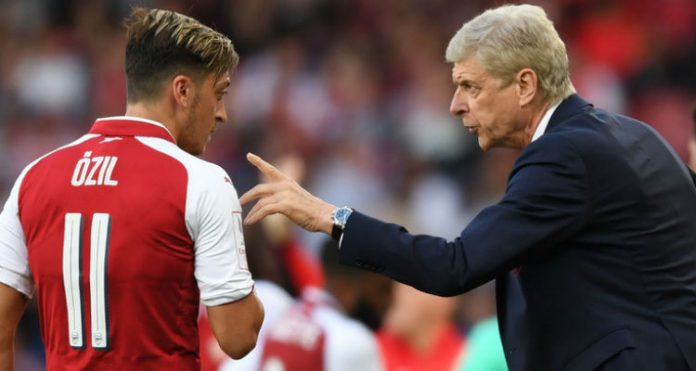 Blogs was up very late last night dealing with something far more important than Arsenal so I’m going to run through a quick Saturday morning round-up before I head to my day job…a day job that doesn’t usually involve Saturday work but does today because for one November weekend every year global consumerism decides to gorge on itself against its better judgment.

I digress…and before I go off on a rant that’ll get me fired, let’s talk about Mesut Ozil.

A couple of days ago the Catalan media speculated that the Germany international could seal a cut-price move to Barcelona in January as we look to recoup some of his £42 million price-tag before its too late. While Arsene Wenger has hinted that an early exit isn’t impossible, when asked on Thursday if a deal had been done he was very dismissive.

“No [deal has been done]. What kind of control can I have over that [speculation]? All these people have agents who can talk to anybody. That doesn’t disturb people, that happens all through their career.”

With five weeks before the transfer window opens again, you can be sure that Wenger will have to tackle this topic repeatedly in his press conferences. Personally, I’d hold onto Ozil and keep our fingers crossed he can keep delivering performances like the one in the North London derby. THAT Mesut is a pleasure to watch and could help us back into the top four fight.

The boss went on to make clear that both Ozil and Alexis remain professional despite the speculation and that he has no qualms playing them.

“They are honest. I don’t question their honesty. Nobody knows what will happen when the players reach the end of their contracts. Our worry is to perform on Sunday, that’s it.”

He should worry about Sunday, because on paper the trip to Turf Moor is very tough. Not only are we still in November (which we’re usually shit at) but Burnley, who are level on points with us, haven’t been this good since the late fifties; a time when men wore hats wherever they went and the sun was so strong that the world operated in just black and white.

To be fair to the boss, he’s not underestimating the Clarets comparing their ruthlessness to that of a snake.

“They have won games with 25 per cent or 30 per cent possession, that means they are calm, they know what to do and they are patient with that killing instinct of a snake. They put you to their face and then they bite you.”

That’s quite a scary image, especially, if like me, you view Sean Dyche as a giant, ginger testicle with a malfunctioning voice box. Who’d want to be bitten by that?

We’ll have a strong squad for Sunday (a game that is NOT being televised in the UK) with only Theo Walcott (ill) and Santi Cazorla currently on the sidelines. Thankfully Danny Welbeck came through his Cologne cameo just fine.

As you’ll remember, last year we scraped a very satisfying win by controversially bundling the ball over the line in the dying seconds of stoppage time. That would do me just fine again.

Elsewhere, Jack Wilshere says he’s ready for an honest conversation with Arsene Wenger about his future at the club. He sounds like a guy who wants to get things back on track at Arsenal but at the same time he knows that if he’s stuck playing Europa League and Carabao Cup football he’s not going to the World Cup in Russia.

Judging by Jack’s latest quotes, his relationship with Wenger certainly seems stronger than the non-existent one he has with Gareth Southgate who he claims is yet to contact him.

“If he wants to call me, my phone is always on. He didn’t put me in the squad and had that to focus on. He said in the press what he wanted me to do: get in the team and play regularly, and that’s what I’m trying to do. That’s all I can do.

“If [Southgate] sees me in that [deeper] position, I have to play in that position. At the moment, I’m playing a bit higher here and the boss sees me there.

“To be honest, that is probably my favourite position. At the end of the day, all I can do is try and get in the team. I’ve played everywhere.”

Right, that’s your lot for today. As always for the latest daily updates keep your eyes on Arseblog News. All being well, Blogs should be back tomorrow. Enjoy your Saturday, I’m off to coerce people into buying shit they probably don’t need. Shoot me.