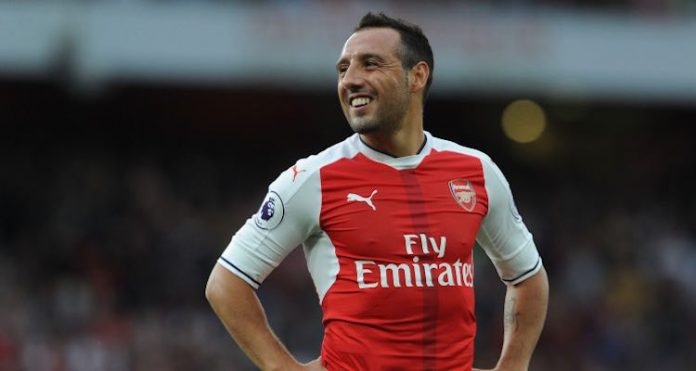 There was a moment in what was probably his best ever performance for us that summed up Santi Cazorla for me. It wasn’t him twisting and turning away from Man City’s midfielders who, at that point, were trying their best to stop him by fair means or foul, but something a bit more prosaic.

He stood over a free kick in midfield, clipped the ball into the area and watched Olivier Giroud flick a header home to make it 2-0. As the ball hit the back of the net, he did a little dance of delight before being enveloped in a Nacho Monreal hug, and it was just perfect. Players and fans live for those moments of happiness, and even taking into account Cazorla’s generally cheery disposition this was one of them.

So, to see the damage that has been done to him in the last 12 months is really difficult to take in. Of course you don’t want to see any player suffer with injury like that, and we’ve had a few at Arsenal down the years who have endured terrible problems – both physical and mental – but few players are as universally liked as the Spanish midfielder. He’s one of the game’s good guys, someone even opposition fans can’t hate, and what he’s been through is terrible.

He spoke to Marca this week to reveal the full extent of his problems, and it’s made for shocking reading. The bullet points:

The picture on the front page of Marca tells you everything you need to know about how bad it was – and it’s not for the faint-hearted. Despite the damage though, he continues to work towards a comeback, saying:

I’m still cautious because of the pain and the tough times but I still trust in myself but you have to bare in mind this injury has never been as straightforward as many thought. I am aiming to return in January, it keeps me motivated.

You can understand why that’s got to be his target, regardless of how unlikely it might be. Looking at that ankle it’s hard to imagine that he’ll ever be able to get back to the level he was at before, but without having that to work towards he’d be forced to consider the inevitable and the dreaded R-word.

At the moment he’s living on his own in Salamanca, training and doing rehab, while his family remain in London. It must be desperately tough, doing all that work, being alone without people around, all with the weight of knowing that no matter how hard he tries and how determined he is it might not be enough.

He says that he hasn’t suffered mentally from it, but even someone as cheerful as Santi Cazorla must have had some dark times during an ordeal like this. Which is why I’m happy that Arsenal have stood by him. Some questioned the decision to take up the one year extension on his contract last January, a time when it was clear what he was going through was not an ordinary injury, and that perhaps he might not play again.

I think you would have to be a cruel institution to cut a player loose at a time like that. He was injured playing for Arsenal, and clubs understand the risks. You can sign a £200m player and see him get banjaxed in his first game. That’s part and parcel of it, and when someone like Cazorla, who has given you such good service, needs the backing and support a club provides when a player goes through something like this, then you give it to him.

It looks really bad, I would be very surprised if we ever saw him play for us again – which is a huge shame because he’s such a wonderful footballer – but without having that possibility to work towards, it would have made all these weeks and months of recovery even more difficult. All we can do is wish him well and lots of luck because I think he’s going to need that on top of the all the best medical care he can get.

It would be fantastic to see him again between now and the end of the season, he doesn’t deserve to see his career fizzle out like this, and maybe we’ll get to see that little dance one more time. Fingers crossed.

Right, that’s your lot for this morning. I’ll leave you with this week’s Arsecast which I recorded yesterday in Sydney. I met ace cartoonist David Squires to talk about lots of stuff, including his brand new book. Listen/subscribe below.