One of the potential upsides for the remainder of Arsenal’s season is that the Alexis, Özil and Lacazette partnership has not had an opportunity to entirely gel. Injury and tactical tinkering has kept the triumvirate apart and all three players have been relatively slow to hit their stride this season.

Lacazette’s injury in the Huddersfield match threatens to separate the AÖL Service Providers (as The Man from East Lower christened them recently) for a little longer. Lacazette is still adapting physically. Large sections of the fanbase bristle at his regular early substitutions, but he does tend to looked pretty borked after about 55 minutes. It’s possible that his recent groin injury is connected to his physical adaption.

Mesut Özil has found his stride in recent weeks. The German picked up a knee knack in the final week of pre-season, which is just about the worst possible time to pick up a knock for a footballer. Sanchez still hasn’t hit the heights of last season, though his relentlessness means that his attacking output is still high.

It is not unreasonable to assume that, health permitting, all three ought to be able to improve their outputs in the second half of the season- especially if they hit it off as a trio. A rising tide lifts all boats. Nevertheless, it is interesting to observe how Arsenal have tinkered and tailored their attacking approach this season.

The catalyst for this particular change was obviously the move to a back 3 which, lest we forget, only happened in the dying embers of last season. This is significant because Arsenal now play with a pair of inside forwards as opposed to wide forwards, with the wing-backs providing the cut and thrust from wide positions.

This has slightly altered the spaces that Arsenal attack. No longer is the plan to funnel the ball out to Sanchez on the left while he tries to either cut in and shoot or loft a ball to the back post (though this does still occasionally happen). No longer is the plan for Theo Walcott to make a snaking run from the right as the opposition defence shifts over to try and crowd out Sanchez.

The use of inside forwards means that Alexis’ starting position is further in field, in the half space, while Özil has the freedom to drift inside and outside as the space presents itself. The addition of Alexandre Lacazette has given Wenger the mobile and clinical striker he has thirsted for for so many seasons, so now the front three plays much tighter together as a triangle.

As a result, the attack is based much more on interplay and fluid movement. In other words, it’s nudging closer to Wengerball. There has been a slight personnel shift away from some of the squad’s more direct style of attacker. Alex Oxlade Chamberlain has left, Theo Walcott has been frozen out and Olivier Giroud has become a peripheral figure.

When Özil has been unavailable, Iwobi has deputised because the manager appreciates his technical play compared to the likes of Walcott and even Welbeck. This thread from @Orbinho shows that Arsenal have become a little more precise in their build-up from wide areas now that, essentially, Chamberlain has been replaced by Kolasinac. 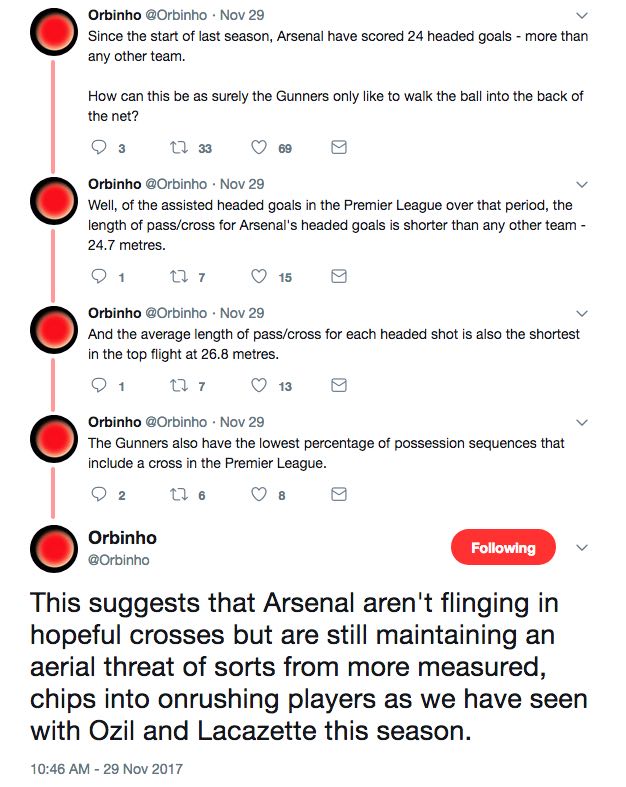 Chamberlain’s approach from wing-back was eye catching and not invaluable, but with Bellerin and Kolasinac, Arsenal favour working them into positions next to the by-line with short combination passing. The combination between the inside forwards and the wing-backs is key to availing of this corridor of opportunity, as we have seen many times this season.

The approach is more scalpel than flamethrower. Both Kolasinac and Bellerin have spent part of their football education as central midfielders and it shows in their more considered approach. In short, with two inside forwards, two wing backs and a striker in Lacazette that loves to run the channels, Arsenal are bombarding the half spaces between centre halves and full-backs.

The vogue for three man defences has helped Arsenal to do this. (Or, if we’re giving credit where it’s due, the Gunners have responded directly to the trend). Three man defences are easier to stretch in this fashion and Wenger has put together an attacking shape that can exploit teams that match them up.

Effectively, when the Gunners face a team with a back three and two wing backs, they are going five against five in possession, with Aaron Ramsey providing sixth man support as a spare runner. The Welshman has also worked up the creative side of his game. He regularly finds the angled ball in the channel between central defenders and full-backs that sets a runner (usually a wing-back) free.

We saw several examples of his awareness of this space in the demolition of Huddersfield on Wednesday evening. Arsenal’s front 5 has more liberty to move and interchange than the opposing back five and has been able to pull them around by focusing on hitting these corridors of space.

Prior to Wednesday evening, it felt a little like Olivier Giroud’s Arsenal career was petering out. The types of service he typically thrives on are no longer as freely available. He has enjoyed combining with more direct players, such as Walcott and Chamberlain. Defences have long since figured out his penchant for flicks and flourishes on the lip of the penalty area.

He has struggled in the Europa League because he has been teamed with Wilshere and the pair has lacked variety as an attacking partnership. They have spent the last three Europa League games trying to recreate the classic tiki-taka goal against Norwich and they managed a workable artist’s impression just once, in Belgrade.

Giroud’s powers as a supersub dwindled in the early part of the season because Arsenal aren’t really equipped to throw crosses in at him any more. His last gasp headed winner against Leicester in August probably created a false impression of how best to use him this season. The Gunners attack has transitioned away from aiming for his head.

Against Huddersfield, both of his goals saw him provide the finishing touch to flowing moves. Both of them arrived as a result of cutbacks after the half spaces had been picked apart by his teammates. With Lacazette injured, it will be interesting to observe how Wenger replaces his skillset.

Welbeck can offer that running into the channels that the team has really adjusted to. But Giroud has shown many times that he can avail of a cut back from the by-line. Welbeck gives us greater tactical continuity but I would back the Frenchman to finish a presentable chance between the two.

The positive for Wenger is that his team has found a continuity of approach in attack, even though he has not had a continuity of personnel. It might be a few more weeks now before the “AÖL service providers” can really build a rhythm together, but the tune is well established once they are ready to jam together on a more regular basis.